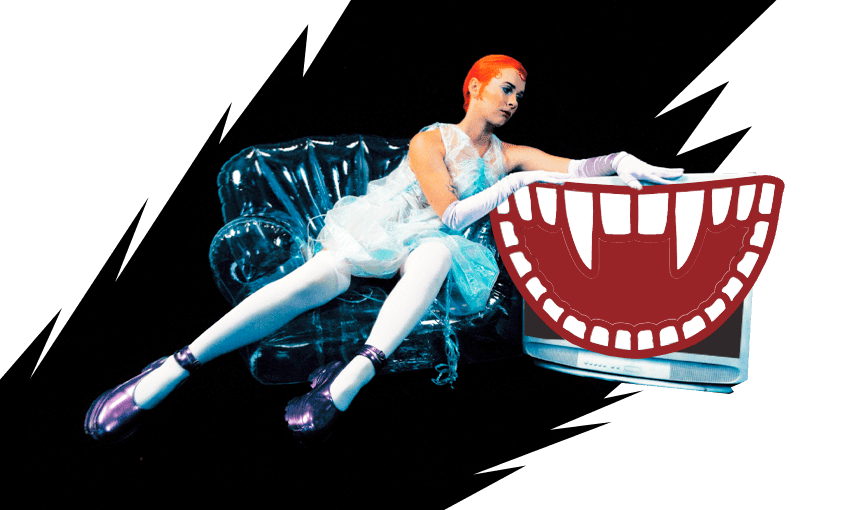 ‘Like grief on steroids’: How Broods found solace on Space Island

Georgia Nott looked like she had it all. In late 2018, her band Broods was about to release their best album yet in Don’t Feed the Pop Monster, a brilliantly upbeat blast with a middle finger raised at the music industry. By November, they were on tour with Taylor Swift across Australia and New Zealand, playing stadiums packed with up to 80,000 fans, the biggest shows of their careers.

“Everything’s looking peach now,” sang Georgia during ‘Peach,’ the last song of the tour’s final night at Auckland’s Mt Smart Stadium. Discarding her pink dress jacket, with her blonde hair tied up in knots, she bounced around the stage while her older brother Caleb, the other half of Broods, rocked out behind her.

After three albums, two of which saw them dropped by different record labels, it seemed that Broods had finally found their rightful place in the world.

But everything wasn’t looking peach. Just 24 hours before hitting Swift’s stage, Georgia had split from her husband. With him in Los Angeles, their break-up was conducted virtually. On the day of the show, Georgia completed an entire day of press, putting on a happy face, but feeling like she was falling apart.

That night, on stage before Swift, her performance was engulfed by tears. She cried walking on stage. There were more tears during the show. “She cried walking off,” says Caleb. It didn’t seem to affect their performance. From the crowd, it seemed triumphant. “It’s really strange how things can be going so right and so whack at the same time,” says Georgia.

The road to divorce had started six months earlier, when Georgia’s therapist asked her, pointedly, if she still wanted to be married. She replied: “I don’t know.” Georgia felt pressure to make it work. “I loved him. He’d been with me through a lot of fucked up shit,” she says. Inside, she knew it was over.

Despite sharing a home with the couple, Caleb had no idea things were going so badly between the pair. “It was painful, but also I knew it was right for them not to be together,” he says. “It was really rewarding to get (my) sister back at the end of it, and to get the person that you lost for a while back in your life.”

As Caleb talks, tears well in Georgia’s eyes. She readily admits she’s an emotional “sad girl”. It’s what makes her such a great lyricist, and a captivating front woman, but it also means Georgia’s capable of crying in the unlikeliest of places. She’s in one of those now, sipping cocktails with her brother in the corner of a packed dining room of The French Cafe, Auckland’s poshest restaurant.

It’s the place where couples come to celebrate engagements, Valentine’s Day, love. The irony isn’t lost on Georgia, who has come to celebrate new music, and talk about her divorce. The two go hand-in-hand because her break-up is all over Broods’ shiny bruise of a new album. Called Space Island, it’s an exercise in post-trauma recovery, with Caleb’s “sad club music” backing a deep-dive into Georgia’s feels.

With songs including ‘Heartbreak’ and ‘Distance and Drugs,’ it’s not hard to pick the references. On ‘Gaslight’, a song Georgia says “still fucks me up,” she sings, “Don’t walk out on me this way / Don’t you remember the promises we made.” On ‘Like a Woman’, the album’s centrepiece, she sings: “I felt so safe / In the bubble you made me / But I never felt like a woman to you.”

It is, Georgia agrees, raw. That’s because they started work on Space Island during a tumultuous time. Stuck in France when Covid-19 lockdowns began in 2020, the pair scrambled the last flight possible back to Los Angeles, and began decompressing. For Georgia, that meant dealing with her divorce. “One thing I learned is that when you go through one loss, other losses are triggered,” she says. “All of that came up, like grief on steroids.”

Things were dark for Caleb too. “The only time I’d leave the house was to go to Black Lives Matter protests, or the studio,” he says. Over this time, they received news that their grandfather, the musical centre of their large extended family, had passed away. Because of closed borders, Georgia and Caleb couldn’t attend his funeral.

As the pandemic progressed, they had nothing but time on their hands. Georgia turned her thoughts into poetry, and fully formed songs. When she showed her words to Caleb, he knew what they were about. “I didn’t even have to ask,” he says. He began composing music that would showcase Georgia’s feelings to their fullest extent. He told her: “Say what you need to say, and I’ll make it sound like what you’re saying.”

The resulting album, Space  Island, forges a new path for Broods. Their crisp pop sheen from the past is still evident, but there’s a darker undercurrent running through their new songs. That, says Caleb, is by design. “The first half is a bit of a rollercoaster. You get thrown around. There’s a few G-forces.” The second half is designed to stabilise things, to recreate that feeling of “trusting again, loving yourself again.” In other words, finding solace.

Not that it’s all sunshine and roses. Broods should be out on the road, backing up Space Island with a tour, Georgia getting her “extreme catharsis” out in 75-minute bursts. With New Zealand in alert level red, their local tour’s been cancelled. Instead, they’re heading to Australia, then America, later in the year, with an eye on playing shows here during winter. Waiting things out together at Caleb’s Piha home, it’s the thought of being back around their fans that’s getting Broods through.

That’s because their music attracts an insular, dedicated crowd who don’t always show their enthusiasm off during shows. It’s afterwards, outside their tour bus, where fans wait for hours afterwards, that their real feelings come out. They bring Caleb and Georgia gifts, or art, and tell them stories about how Broods’ music has changed their lives. Occasionally, as in the case of a burly Australian man who approached Caleb after a show, they hear stories about how Broods songs saved their lives.

“It gets really deep,” says Georgia. “We’ve slowly but surely revolved our careers around pleasing those people that want someone to turn to when they feel depressed and anxious or in a transition that’s hard and they don’t know how to move through it.” If anyone can empathise, it’s Georgia. She’s just traveled to Space Island herself, a survivor offering her expert services as a tour guide. “Now I can be sitting here, talking to you, really, genuinely saying that I’m grateful for that time.”

Space Island is out on streaming services now.