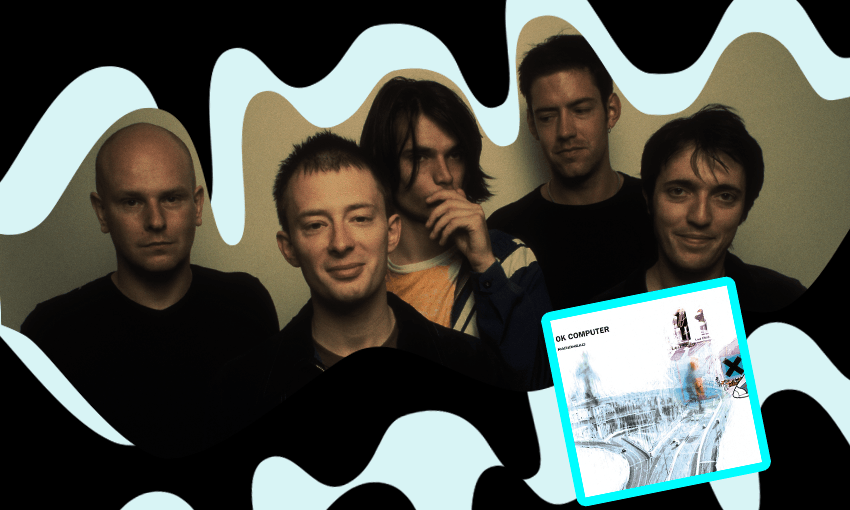 Radiohead’s landmark album OK Computer is 25 years old. To mark the occasion, Calum Henderson listens to it in a movie theatre with the lights turned off.

I’m in the back row of a movie theatre and my face is totally covered with masks. A trusty blue disposable covers my mouth and nose, while the complimentary eye mask I was handed on arrival is trying valiantly to make me less aware of the fact I’m sitting in the dark with a bunch of strangers and we’re all very intently listening to ‘Paranoid Android’ by Radiohead.

This is Pitchblack Playback, an idea which started in London in 2016 and has since spread around the world. The idea is that you go and sit in the dark and listen to a whole album from start to finish on a sound system bigger and better than what you’ve got at home, to “hear and feel every nuance” of the recording free from interruption or distraction. At Auckland’s Capitol Cinema they play a different album every month – in April it was Graceland by Paul Simon, last year they did Lana Del Rey’s Norman Fucking Rockwell.

It was the mental image of everybody silently mouthing “It’s me your little Venice bitch” to themselves in the safety of the darkened cinema that did it for me. The whole concept just seemed really funny in a way I can’t explain other than to say it’s the same energy as that video of Lorde shushing the audience. It also appealed in a big way to the part of me that sometimes wishes people wouldn’t sing along in the car. When I saw the targeted Facebook ad inviting me to celebrate the 25th anniversary of OK Computer, I knew my number had been called.

This is not my first time listening to OK Computer in the dark. Late one night during the peak of my teenage angst / Radiohead fan phase (a real chicken or the egg situation), I took my Discman out into the garden and listened to the whole album sitting on a concrete step by the washing line. It started to rain. I didn’t move. I think I was expecting some kind of transcendental experience, but mostly I just sat there thinking “I am listening to Radiohead in the rain”.

Now, 22 years later, as Thom Yorke draws breath to deliver the famous “kicking squealing Gucci little piggy” line in ‘Paranoid Android’, all I can think is “I am listening to Radiohead in the dark.”

I wouldn’t say this is a dream come true, necessarily – 15-year-old me never would have dared dream so big. I tell myself I’m doing this for him, but I’m also doing it because I’ve just always wanted to listen to music on a really expensive sound system to see if I could hear any difference. This version of OK Computer is made up of “24-bit stereo files upmixed to surround sound” (presumably higher quality than Spotify) and is being played through movie theatre speakers (surely better than a UE Boom).

The short answer is that it sounds good but not dramatically better than a pair of mid-price headphones. When I concentrate I sometimes notice more “depth” and “texture” and maybe some of the songs sound a bit more “3D” than they do on Airpods. Basically it’s like the difference between drinking $10 and $100 bottles of wine – ultimately both just taste a lot like wine. (Full disclosure: I’ve never actually tried a $100 bottle of wine, but this is what everybody says.)

Maybe I’m finally ready to concede that I am not and never will be an audiophile. Listening to music this intently makes it impossible to enjoy, like trying to fall asleep when you’re thinking about falling asleep. I take off my eye mask after ‘Fitter Happier’ and illegally open the Notes app on my phone to write down all the big revelations I’ve had so far.

“Fitter Happier best song?” It always just felt like a novelty track but I now think there’s a case to be made. “Big lungs”. Probably the technical detail that stands out most on big speakers is how long Thom Yorke can sing without taking a breath. A reminder to never try and do ‘Exit Music (For A Film)’ at karaoke. “I am listening to Radiohead in _______”. Words for my tombstone?

The biggest revelation that strikes me about OK Computer is that all the best songs are in the first half. The back end of the album is a test of endurance. I remember getting impatient for it to end that night in the garden too, but I put that down to the fact I was starting to get worried about hypothermia. Now I have become resigned to doing the same thing I do every time I listen to Radiohead these days: pointlessly ranking the albums from best to worst in my head. I put this one third or fourth.

There’s plenty of evidence to suggest I’m in the minority in getting absolutely nothing out of this experience. One online reviewer described a Pitchblack Playback session where they listened to a Muse album in the dark as “a transcendental musical experience like no other”. Another who listened to a Bon Iver album in the dark writes about how at one point they were “literally breathing the music”.

Is everybody else in the theatre transcending without me? They definitely are. I can tell from their completely still and silent silhouettes that they’re probably synchronising their breathing to the unconventional time signatures and are experiencing every surprising chord change and innovative guitar riff as a psychedelic spirograph of colour in the screensaver of their mind. Mine is just plain white text bouncing around endlessly on a black background: “I am listening to Radiohead in the dark.”