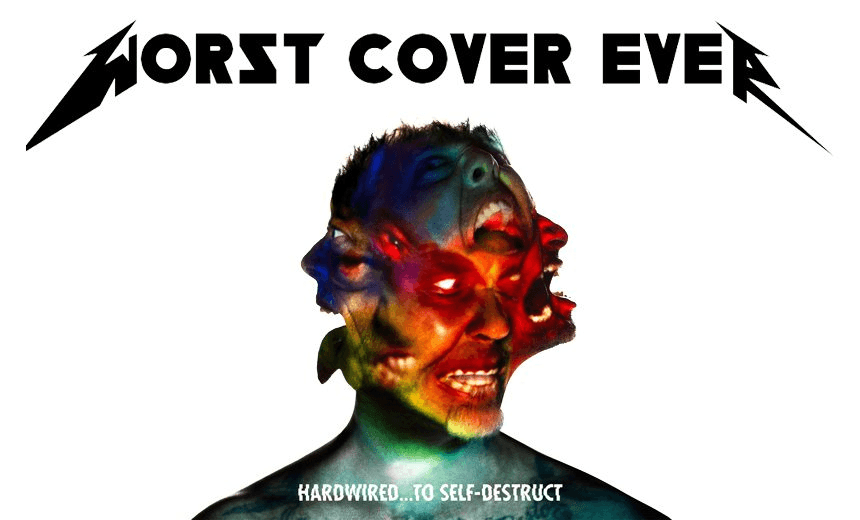 Is this new Metallica atrocity the worst album cover ever?

Pete Douglas recoils in horror at the cover of the new Metallica record, placing it top of his worst album covers ever chart.

Metallica are a mess of contradictions – the best heavy metal act of the 1980s, a massive corporate machine built to sell t-shirts and vast masses of pointless ephemera, a totem for how to succeed on your own terms as a band, and, yet, seemingly a bunch of manchildren who went through group therapy to finish an album.

I love them and I hate them. As a teen, two of my closest friends were obsessive fans – forcing me to spend hours watching the video for ‘One’ on repeat (it’s just so long), and whiling away many a long sunny afternoon taking in gargantuan live DVDs of the band in action. It has always seemed that for every good thing the band has done (the first five albums, the glorious stupidity of the Some Kind of Monster documentary) there has been an equal and opposite horror inflicted on the world (that album with Lou Reed, celebrities wearing distressed Metallica tees, Lars Ulrich’s haircut).

And so it is with their new album Hardwired to Self Destruct (“We’re so fucked, shit out of luck” roars James Hetfield on the track ‘Hardwired’), a throwback to their ‘80s heyday that works well, and has some resonance given the current state of the world.

But what the hell is up with that unspeakably awful cover art?

It’s hard to imagine four middle-aged millionaires sitting in a boardroom, looking at this ugly, mangled, monstrosity of their likeness, mashed together in one grotesque blob, and saying, ‘Yeah that’s pretty cool. Can we have some more random bright colours in there do ya think?’. It’s a garish, tasteless, ugly mess.

History is littered with bad joke covers that time has forgotten, but given it’s 2016, (old) people actually know who Metallica are, and the band presumably have fairly unlimited resources from cynically peddling $150.00 deluxe editions of their early albums to do much better than this utter atrocity, which is, quite simply, the worst album cover of all time.

Don’t believe me? Here are some of the other close contenders which are somehow still not quite as appalling as the unholy Metallica mess:

What do you get when you take all the worst aspects of grunge (the tendency to be overly serious and rely on easy emotional cues rather than, y’know, actual tunes) and combine it with a pseudo-Christian rock band led by a Christ complex-addled douche bag? You get Creed.

Creed were, are, and always will be truly terrible, and are only redeemed by their seeming inability to stay together for any substantial stretch of time without imploding.

When their third album Weathered was released, singer Scott Stapp said it was OK that critics hated the band, because critics hated Led Zeppelin at their peak too. It’s a bit like Donald Trump saying it’s OK people don’t like him because some people didn’t really like Nelson Mandela at various times in his life either.

The cover – which features the band having their stony-faced likeness chiseled expertly into a tree – is remarkable for its sheer pomposity but, given how terrible the band was, it could be worse. At this point of his moronic mania, I’m surprised Stapp didn’t demand a cover where he was being crucified on a cross. Or perhaps instead of a trusty old oak, the band could have been depicted on the face of Mount Rushmore, or possibly even the moon?

The imbecilic and awful German hard rock band responsible for ‘Winds of Change’ – that mind-numbingly cheesy dirge with a tuneless whistling intro – Scorpions’ Lovedrive was released in 1979, which kind of explains but in no way excuses the terrible tacky sexist cover.

Before embarking on a career as a successful solo artist, Billy Joel formed a god-awful electric organ and drums duo (I shit you not) with his friend Jon Smalls, which broke up promptly after the album tanked commercially, and Joel had started an affair with Small’s wife.

The cover of Attila’s only album is remarkable – Joel and Smalls are dressed as Huns, with animal carcasses suspended surrounding them, with the duo seemingly playing it all deadly seriously.

It’s a terrible cover to be sure, but the music within constitutes the single worst album of the post-rock n’ roll era, which kind of dwarfs the artwork. The record is an unholy mess of wailing, effects-laden organ, Smalls drumming like crazy just to be heard, and Joel screaming over it all.

Referred to by Joel himself as “psychedelic bullshit”, it’s here to listen to in full, though you can get a similar experience drilling a hole in the side of your head.

Led by Fred Durst – a moronic, loud-mouthed, misogynistic, red cap-wearing bully from a gentler time when such a stance wasn’t a platform from which to successfully run for the highest political office – Limp Bizkit were huuuuge back in the day. Chocolate Starfish and the Hotdog Flavoured Water is a bad album, a gross piece of schoolboy scatalogy, and still somehow holds the record for being the fastest selling first-week rock album in U.S. history.

It is, without doubt, an abhorrent cover, but it fits perfectly with the puerile idiocy of Durst, so one would not expect anything more of him, really. To this day you can find it staring out at you from the music bargain bin, or in the garage of that dodgy Durst-ian looking uncle who has a lot of Puddle of Mudd and Staind CDs tucked away among the old photos of him sporting a bad goatee and cornrows.