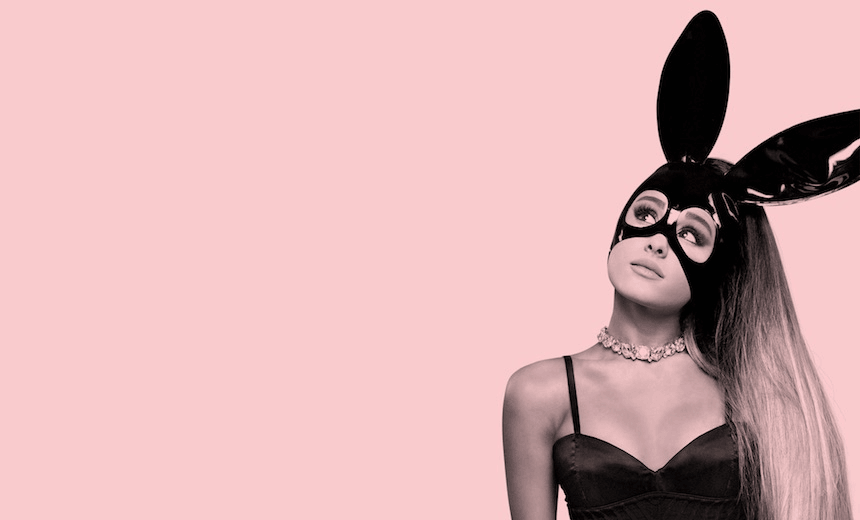 Ariana Grande is incredible. Criminally underrated and often overlooked, her potential to be recognised as pop music’s It Girl has consistently been overshadowed by the more iconic players in the game. She’s always there, lurking around the top 10 and on all of the red carpets, but never quite in the capacity she deserves.

She’s been surrounding herself with the right people since making the leap from Nickelodeon to grown-up stardom, and has been nailing it ever since. So, in light of the recent announcement she’ll be gracing us with her presence later this year (*screams with excitement*), now seems an ideal time to lay a case for why Ariana is 10,000 times more relevant than Taylor Swift, Katy Perry and Fifth Harmony combined.

Staying hip and cool is the nemesis of pop stars the world over. It’s a feat so unachievable that, if reached, you can be guaranteed a place in the spotlight and an invite to the VMAs for all of eternity. Rihanna pulled it off by churning out records year on year from 2008 thru 2012, Drake got himself there by leaching into every device and platform you have access to, and Ariana is looking set to be the next member of the club.

So how did she do it? Through consistency. She’s been grinding away on the super-mega-pop star periphery for the past four years, and it’s reached a point where her presence is expected.

Even more impressively, her music has also remained relevant. Remember when she did that song with MIKA in 2013? ‘Popular Song’? It was terrible and amazing all at once and had a hook so catchy it drove you mad. Listening back today the song wouldn’t sound out of place on the Hot 100. As for one of her most successful hits, ‘Love Me Harder’, that was released in 2014! Three whole years ago! Girlfriend is aging better than a fine wine and that is something we should be shouting from the rooftops.

It is a scientifically proven fact that 100% of people who have seen Ariana Grande perform live have uttered to the person next to them some version of, ‘But how does that voice come from such a small person!?’ It’s a voice that can only be likened to ’90s pop queen Celine Dion, but one that might one day pay even greater dividends. Sure, Celine has won a bunch of Academy Awards and Grammys, but she was also writing songs that were pretty damn beige and was never a popstar in the whole and complete sense of the word. It’s here that Ariana has and will continue to capitalise, and when she one day has her own Vegas residency, we will laugh at the fact we ever thought it was a good idea to give one to Britney Spears.

She made trash pop videos cool

There is nothing chill about Ariana Grande. She’s got a big voice, a big stage presence, big shoes and big hair. She’s extra in the most far-reaching way, but it’s a special kind of extra that never translates as intimidating or ego-centric, rather a dedication to her craft and her brand. It’s this wonderfully packaged brand she’s built her empire on that can be seen best represented in her many big budget music videos.

She’s got fourteen official music videos under her belt, and not one of them is a dud. There’s 2013’s ‘Right There’ featuring Big Sean that serves as a remake of Baz Luhrmann’s instantly recognisable masquerade ball from Romeo + Juliet, there’s the Star Wars-esque video for ‘Break Free’, and more recently she’s worked alongside music video It Girl Hannah Lux Davis on several videos. These are not only Ariana’s best (‘Focus’, ‘Into You’ and ‘Side To Side’), but have also cemented Davis as the go-to for big music videos that match the big artists behind them.

The best part about all of these high drama, borderline sci-fi videos is they don’t try to be anything more than a trashy pop video. This isn’t Justin Bieber trying to become the next Jason Statham, or yet another lazy The Chainsmokers lyric video. Each video creates a different utopian world people that might actually want to escape to.

The king of pop(songwriting) is her number one credit

Some might call working alongside iconic hitmaker Max Martin cheating. The way I see it, working with such a mad scientist is working with someone who knows your music better than you know it yourself. It’s pure genius.

Writing flawless pop music is a fine art, an art some of the most technically skilled musicians shouldn’t even touch. Writing your own pop songs doesn’t carry the same kind of weight that it does across other genres, so as Ariana has done, chucking your name on a couple of co-writes here and there is more than enough.

You should also always buy the best you can afford, and if you can afford Max Martin you’d be crazy not to tap into the infinite well of knowledge.

Ariana doesn’t toy around with nobodies. Only the best for our girl, and by the best I mean world class. Lil Wayne, Nicki Minaj, Childish Gambino, The Weeknd, oh, and the absolute legend who all of us plebs know as MACY GRAY!

A woman who can do both

Is there a better role model to demonstrate that you can be a feminist while also actively embracing femininity than Ariana Grande? This is a rhetorical question, but if you’re a mansplainer and it went right over your head, the answer is no.

She’s quick-witted, intelligent, and can talk her way out of any inappropriate questions from sexist radio pigs in a way that plays them for absolute fools. Thigh high boots and catsuits aren’t what feminism looks like for a lot of people, but there’s value in young people being able to look at her and know that they won’t be shunned for not meeting old-fashioned expectations of what a feminist should look like.

If your daughters and nieces have posters of seemingly ‘wholesome’ pop stars on their walls you should remove them immediately. Remove them and replace them with an Ariana Grande A1 (I got mine from Real Groovy for $20, bargain), because that woman is a better role model than 95% of people in the spotlight right now. End of.