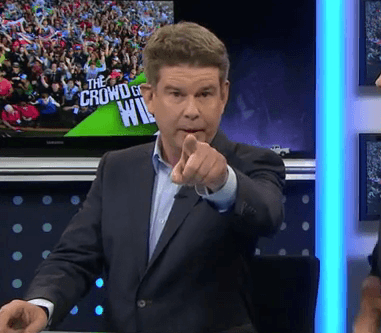 Last night John Campbell got in front of a TV camera for the first time since his tearful farewell to ‘The Cup Song’ from Pitch Perfect. Once direct competition, he was billed as “Hurricanes expert”, taking to The Crowd Goes Wild desk to a cacophony of canned applause and cameraman cheers. “It’s John Bloody Campbell,” says Andrew Mulligan. John looks dazed, looking around the studio:

“Thanks for having me on your show,” says John, “I wasn’t doing much”. It’s a little funny, and a little tense. Hayley Holt mutters “awkward”, and raises her pinky finger to her mouth like Dr Evil for some reason. John immediately sidesteps his “Hurricanes expert” role and goes straight for the old caring jugular. He tells Hayley and Andrew that they need a counsellor, noting that they don’t talk between the ad breaks. They laugh uncomfortably, “there’s a little bit of tension there.” I raise a Dr Evil pinky finger of awkwardness to my mouth.

Hayley brings up Samoa and Sky TV, but John is more concerned about which camera they are looking too. He’s a bit rusty, but not so rusty that he can’t read the heck out of an autocue. A stunt man takes the record for driving on two wheels. “Amazing,” John marvels. The tinny fake audience starts to cheer, signalling the end of the episode. To celebrate John’s brief return to television, Hayley and Andrew stand to clap and dance. John beams rolling up his script and playing it like a trumpet.

The Crowd Goes Wild airs on Prime weeknights at 7pm