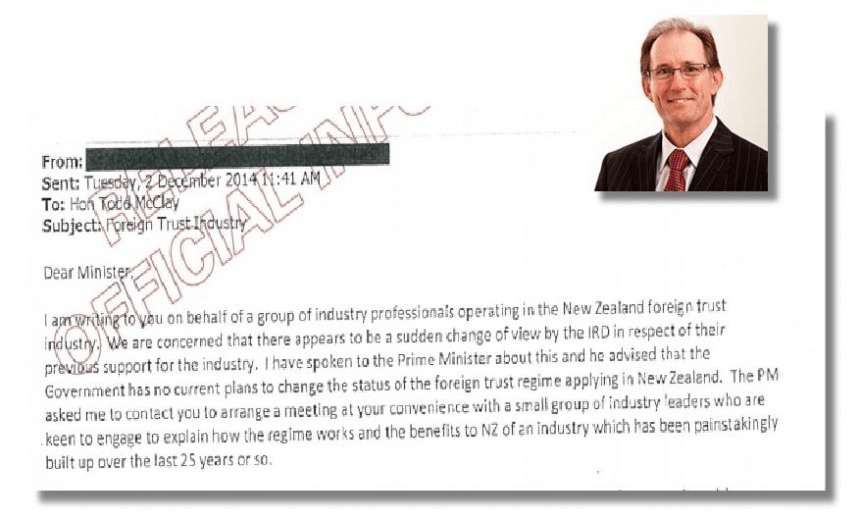 The prime minister has suggested his lawyer was sloppy in his choice of wording in an email two years ago. Now, on assurances regarding Mossack Fonseca, is the sloppiness getting even sloppier?

On April 13, the prime minister was widely reported as saying he had been assured that his longstanding personal lawyer, Ken Whitney, had not worked or dealt with Mossack Fonseca, the company at the centre of the Panama Papers leaks.

Take this, for example, from Newshub:

This afternoon, however, the Australian Financial Review, which has been privy to the Panama Papers leaks in connection with the International Consortium of Investigative Journalists, published a story relating to the controversial sale of Taranaki farmland to Argentinian brothers, which “challenges parts of the government’s account of the sale, as well as revealing other deals with a cast of controversial players ranging from senior members of the government of Malta to Panama lawyer with an outstanding arrest warrant in Brazil on money laundering charges”, according to the AFR’s Neil Chenoweth.

The AFR report reproduces this letter, from one Ken Whitney, to Mossack Fonseca & Co:

Does that qualify as “dealing with” or having “done any work with Mossack Fonseca”? It clearly doesn’t imply a working relationship. But at the very least it seems, well, sloppy.

@toby_etc Whitney told me in an email he was not linked to Mossack Fonseca either. Could debate whether reference a link, but still…

(Update, May 7, 1.15pm: John Key has said “there’s no issues” in regard to the Whitney letter. Speaking to media, he said that he had not spoken to him about that matter, but that “he provided a reference about a New Zealand law firm”, which did not constitute “working with” MF: “there’s nothing wrong in that.”)

The tale of John Key’s personal lawyer, his lobbying on possible changes to New Zealand’s foreign trust tax regime and what he was or wasn’t told by the prime minister, has not always been easy to follow. At one point this week the prime minister helped us understand by reference to his egalitarian approach to Koru Lounge visitors.

A crucial point of contention concerns Mr Whitney’s remarks, in a 2014 email to revenue minister Todd McClay, about having discussed with Key a report regarding IRD plans to review foreign trust laws. Whitney said he had “spoken to the Prime Minister about this and he advised that the Government has no current plans to change the status of the foreign trust regime in New Zealand.”

Yeah, nah, said Mr Key of the assertion, contained in emails released to the Green Party under the Official Information Act. Mr Whitney hadn’t been advised of any such thing, and he now recognised that. “He is absolutely confident that my version of events is correct and that’s what he attempted to write in the email,” Key said.

“It may be the email was sloppily written,” reckoned Mr Key, who had simply “sent him off to the minister”, as he would with anyone, including those from all walks of life who approach him in the Koru Lounge.

Some lawyers may take exception at the idea they might be sloppy email writers. But Mr Whitney, it turns out, is not a lawyer, or he was a lawyer, but he is not a lawyer any longer. Which means he is not Mr Key’s personal lawyer, as he is routinely and sloppily described.

As Mr Whitney reportedly told the Standard blog, “I’m not calling myself a lawyer, Mr Key is.”

The sloppiness, it is all around us!

Whether to repair further sloppiness or simply in the cause of a spruce-up, Mr Whitney’s current firm, the Antipodes Trust Group, has revised its website to help clarify a few things about the foreign trusts based in New Zealand.

For example, from the mid-March 2016 version, under the “Why choose New Zealand as a trust jurisdiction” heading:

At some point before the end of April, after the Panama Paper revelations and the sudden attention being paid to foreign trusts, it had been carefully augmented with the sentence, “The name of the trust and details of the trustee must be provided to the New Zealand tax authorities and are subject to exchange of information tax treaties”, and a note that “the trustee who must also be satisfied that funds contributed to the trust are from a legitimate source”

Under the “About” heading, an important word has been added.

The earlier version has been updated, removing any suggestion Whitney remains a partner in a legal firm. Lower down, moreover, the words “Ken … continues to be a member of the New Zealand Law Society” have sensibly been removed.

If nothing else, in a world beset by slop, this appears to point up the value of revelations such as the Panama Papers leaks in spurring us all on to exterminate the scourge of sloppiness.

The Spinoff has approached Mr Whitney and the prime minister’s office for comment.