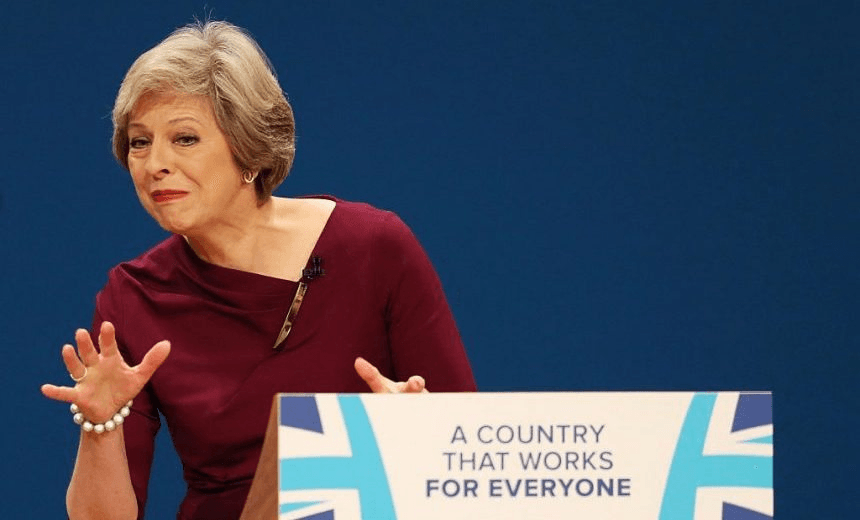 May Theresa May delivers a speech during the fourth day of the Conservative Party Conference 2016 at the ICC Birmingham on October 5, 2016 in Birmingham, England. In her first speech to conference as Prime Minister Theresa May is expected to reach out to the centre ground and try to appeal traditional Labour voters. (Photo by Matt Cardy/Getty Images)

May Theresa May delivers a speech during the fourth day of the Conservative Party Conference 2016 at the ICC Birmingham on October 5, 2016 in Birmingham, England. In her first speech to conference as Prime Minister Theresa May is expected to reach out to the centre ground and try to appeal traditional Labour voters. (Photo by Matt Cardy/Getty Images)

This time last year Theresa May, not yet the prime minister of the UK, dominated the Conservative Party conference. To my outsider ears, her message rang out with the clarity of church bells chasing out the Devil: Listen up, foreign workers! Britain Is Shit. Go Home.

Now, a year later, she’s emerged from the rubble of the Brexit referendum as the boss. Some child of an immigrant says to me, “Amber Rudd wants businesses to publish lists of all their foreign workers, a crackdown on international students, and to get rid of foreign doctors in the NHS”, and I’m like “Oh? And why do I care what Johnny Depp’s ex-wife thinks about immigration and workforce policy?” (Looks at news article.) “Ah. Different Amber.”

Just this week, Theresa May laid out her national vision at the Tory conference again, this time as prime minister. British journalists began rifling through their indices of historical comparisons, searching for one people would actually understand. “Uh… Racist Labour?!?” is about as clear as they can make it.

New Zealanders have seen this before – we knew it as Muldoonism. Dawn raids, but with Bulgarians instead of Samoans. The Battle of Onslow Road, except instead of the Patu Squad it’ll be senior NHS cardiac surgeons scrubbed up with their knives out. Sam Neill bawling “YA BASTARDS” at a black helicopter, but instead of Sam Neill it’s a tutorial group of media studies undergrads from London Metropolitan disappearing into the bush with their Fjällräven backpacks. And instead of full employment and big state protectionism, it’s zero-hours contracts, foodbanks, and no libraries any more, which seems like kind of a shit deal.

So what is leftwing supposed to mean in a time when the Red Tory/Racist!Labour prime minister announces that she is there “for the working class” and gives approving nods to Clem Attlee, the British version of Mickey Savage? Turns out that being leftwing, according to May, means being a pesky “activist leftwing human rights lawyer” trying to prosecute brave British soldiers for war crimes. The definition of leftwing is now to be elite, foreign, pro-human rights, and by extension a traitor to the nation; while to be rightwing must mean working class and xenophobic. This level of strategic cynicism makes me wince. It’s not Compassionate Conservatism. This is the shadow of Trump falling across the Atlantic; it’s the ghostly arms of Powell, and of Mosley and his traditional European Fascist comrades, reaching up out of their dirty graves. It’s Muldoon smirking straight into the TV camera and doing that creepy laugh of his: “Nyeh-eh-eh-eh-eh.”

Now, the Conservative Party have a sort of giant sucking sound where their understanding of evidence-based policy should be, and that’s the way they like it. It plays well to the base. They intentionally (or maybe unintentionally; maybe they are that stupid) confuse inequitable, antiquated policies of the 1950s – like grammar schools, being sexist, and making everyone learn Latin – with the post-war macroeconomic and demographic conditions that enabled high employment and social mobility. Correlation is not causation, but they want to replicate the racism and xenophobia of the 1950s too, as if sending back the Windrush and making Britain White again, will somehow fund everyone’s pension. It doesn’t work that way, and this is why their Tory policies won’t make Britain fairer, just more like the shit parts of the 1950s. The reality of May’s new sloganeering? Make Britain Shit Again.

But this is what happens when both the Labour party, and the usual main xenophobic populist party have functionally collapsed under the weight of their combined personality disorders. The main rightwing party will take over everyone’s turf, become Racist!Labour, then say whatever nonsensical thing it wants, never have to actually follow through on anything, and govern for 10,000 years anyway. It’s a small reassurance that it will be impossible for the right to pull this move in New Zealand until the death of Winston Peters.

May’s government can now say whatever it wants to get the racist vote, and like Trump, not have to bear the responsibility of following through with any of it, because their most extreme policies are actually impossible. Just like it’s not possible to screen out all Muslims at the airport; or round up all Mexicans, it’s just not possible for the NHS to function without foreign staff, especially in an environment where everyone knows being a junior doctor in the NHS is total fucking misery and they all want to quit.

But they’ll come up with fresh bullshit for the base as each policy gets knocked down. Because the rhetoric alone is enough for them to stay in power. All that’s needed is strategically timed symbolic intimidation. They need to be seen to be racist. May was home secretary for years, and she knows how to intimidate and harass foreigners. The threatening text messages. The “Go Home” vans rolling menacingly through your hood. She’s like an abusive stalky ex, but one who also has control of all state security forces. I actually met a woman in this situation once, that is, not a woman like Theresa May, a woman whose abusive ex was a senior military official with extensive control of state security forces. Do you know what she did?

SHE FLED THE FUCKING COUNTRY.

Theresa May dusting off her hands: “Job done.”

Tze Ming Mok is from Mt Roskill, has lived in London for eight years, and is pondering fleeing the fucking country.

A select few schools now dominate. The rest have all but given up. And rugby is worse off as a result.
By Dylan Cleaver
Contributing writer
Opinion
11th August, 2022

If National had really sorted its selection problems, the MP for Tauranga today would be Tania Tapsell.
By Toby Manhire
Editor-at-large
Opinion
9th August, 2022