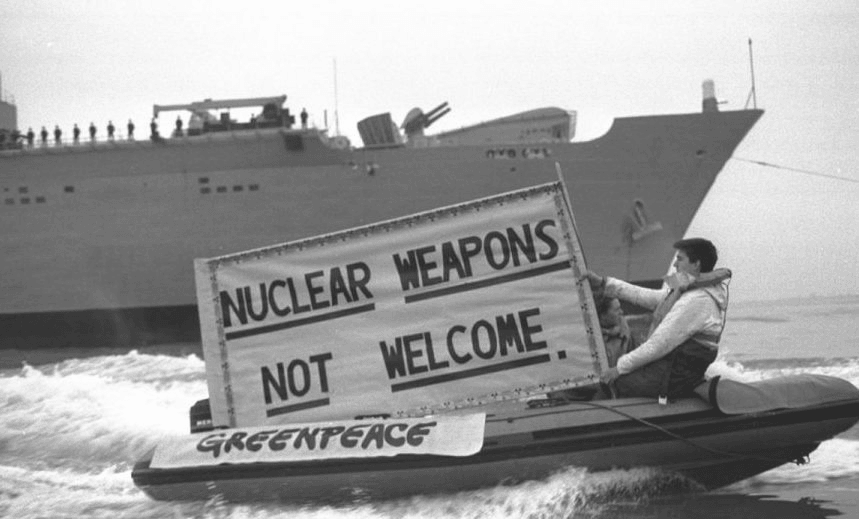 A protest against action against military vessel HMS Ark Royal in 1988. Photo: Greenpeace

A US warship is coming here for the first time since 1987. Greenpeace NZ’s head explains why he’s celebrating

At Greenpeace we’re not so big into war. We like peace, hence the name. But the US government’s decision to send a ship here marks something distinctly positive – a victory for the people of nuclear-free New Zealand, writes Russel Norman.

If a US ship arrives in our waters later this year as part of the Royal New Zealand Navy’s 75th anniversary, as signalled today by John Key and US Vice-President Joe Biden, it will be squarely on the nuclear free terms set by New Zealanders 30 years ago. It will be an amazing victory for the goal of a nuclear weapons-free world, and an amazing win for us.

Three decades ago New Zealanders drew a line in the sand. We said “we’re going to be nuclear free”, and if a country wants to send a warship here, it must not be nuclear powered and it must be free of nuclear weapons.

The US government responded with an ultimatum – if you do this, you’ll be isolated forever and there’ll never be another US warship visit. But New Zealand stood firm – over our right to make our own decisions about our own country, and over our vision of a nuclear free New Zealand and world.

Nuclear weapons are a threat to the future of all humanity – they were in the 80s and they are now. Deteriorating US-China, US-Russia relations mean the risk of nuclear war is higher now than it has been for 30 years.

Former United States Secretary of Defence William J Perry said in February this year: “Today, the danger of some sort of a nuclear catastrophe is greater than it was during the Cold War and most people are blissfully unaware of this danger.”

The world is on high alert, and nuclear war sits firmly alongside climate change as one of the two greatest global existential threats to our civilisation.

New Zealand’s stand against nuclear warship visits is part of a global struggle to ensure our children and we can live free from the fear of nuclear disaster. It says true security never comes from the barrel of a gun; it comes from mutual respect, justice, human rights and environmental protection.

This doesn’t mean we should celebrate warships. The US military remains for many a symbol of excessive might, too often exerted unjustly and with devastating consequences.  The war in Iraq is perhaps the starkest example of this in recent times – an unjust, illegal war that critically destabilised the region and laid the conditions for the rise of Islamic State.

But regardless of what you think of the US navy, or other navies, the US ship visit is an historic victory for people power.

We faced down the mightiest military power on earth, not to mention a traditional ally. We rejected their conditions of friendship. The consequence was ostracism from the ANZUS military alliance.  The US treated us as a poorly behaving little brother and figured that if we were punished and excluded for long enough we’d see the error of our ways, give up our stance, and return to the fold.

But we didn’t. We held our ground. Slowly but surely it has been the US that’s softened its position. And that position has become more ridiculous over time, with the recent example of a New Zealand ship being refused a port in Pearl Harbor while a Chinese navy vessel was welcomed.

Today, our policy stands. It prevails. All those who spent the mid 80s with a placard in hand or just quiet resolve in their hearts should pat themselves on the back.

Greenpeace has been campaigning for a nuclear-free world for over three decades. We continue to work towards a world free of nuclear weapons. If New Zealand can enforce a nuclear weapons free zone, why not others?

Russel Norman is executive director of Greenpeace NZ. This piece is based in part on an earlier blog post here.

Billions in unearned pandemic-era gains should be handed back to taxpayers to help those hurt most by Covid.
By Bernard Hickey
Contributing podcaster
Opinion
25th July, 2022