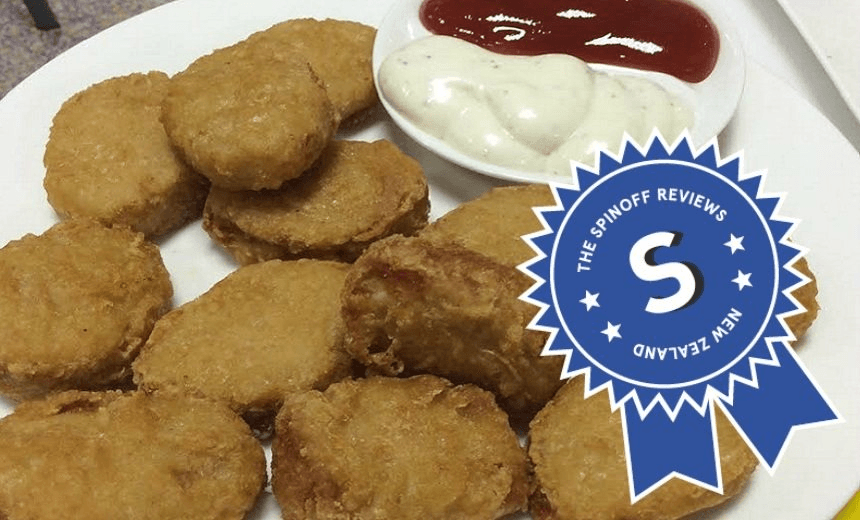 We review the entire country and culture of New Zealand, one thing at a time. Today: Spinoff Parents editor Emily Writes inspects the chicken nuggets at the Chipmunks indoor play centre.

I can remember the first time I had chicken nuggets from the fine establishment that is Chipmunks. If you don’t know what Chipmunks is – because you don’t have children – it’s a giant indoor playground where parents go to try to run their children into the ground so that they’ll sleep. You can do minimum parenting there. It’s quite frankly, a gift to all parents.

You might not associate indoor playgrounds with quality cuisine but it’s time you did. Because Chipmunks knocks that shit out of the park. Their margarita pizza is an oily mess that is tasty AF. It’s delicious. The kids won’t eat it even after they’ve screamed PIZZA at me at a decibel so high I lose my balance, so every time I get one with a girlfriend we’re like – Oh well, better eat the whole thing.

Because I practically live at Chipmunks I’ve eaten almost everything off the menu. I highly recommend the Toasted Chipmunks Melt with avocado and the Charlie’s Beef Burger. The portion size of the bacon is fantastic. Why does everyone always skimp on bacon in a burger?

Charlie is the chipmunk Chipmunks is named after. Just so you know.

Anyway – BACK TO THE NUGGETS.

I was doing the usual mum lunch of despair and whatever dregs your child hasn’t eaten. I had ordered a “chicken nugget munch meal” which comprises three chicken nuggets, chips, and a juice or water for $7.90. This is exorbitantly expensive but I am too useless half the time to remember the lunchboxes I make and also the oldest kid begins almost every trip to Chipmunks with MAAAAMA CAN I HAVE A NUDDET CAN I HAVE A NUDDETS??? and I just give up and order nuggets. Which he then ignores.

Because he doesn’t actually like nuggets. Because he has realised they come from chicken. I asked him why he was surprised, since the clue is in the name and he said “But my name is Eddie and I’m not made of Eddie”.

My youngest is a nugget fiend so I have to fight him for nuggets. Once he came home from Chipmunks with nuggets in his pockets – but we hadn’t ordered any. So he just stole someone’s nuggets?

Many mothers are basically human garbage disposals which is a not a nice way of saying we eat whatever is left over from our kids after any given meal. This is how I eat. People with their shit together probably eat differently.

So I saw the nuggets, sitting uneaten, and thought sweet, nuggets. I never really thought about chicken nuggets until I had kids. I certainly never had any idea there was a hierarchy of nuggets. But there most certainly is.

And when I bit into that delicious, crispy, salty nugget I knew deep in my heart that I had found the one true nugget.

The Chipmunks nugget is the Queen nugget. It is perfectly salted – every time. It is crispy and light which still tasting very chickeny.

And it’s not just me that holds the Chipmunks nugget above the McDonalds nugget or even the KFC nugget. I’m aware this is a huge call. But the McDonald’s nuggets are dryer and the KFC nuggets don’t have the right batter to chicken ration. It soars above the reliable home-made (from a frozen pack) chicken nuggets. It is miles ahead of Junglerama nuggets (too salty), and Laughalots nuggets (were cold).

My friend is a proper actual food reviewer and I made him eat some Chipmunks chicken nuggets and he said the following:

Chipmunks’ unexpectedly delicious chicken nuggets taste like a golden childhood in a world without bullying, war and reversible belts. Crisp on the outside and succulent on the inside, they’re just naughty enough that Jamie Oliver is crywanking somewhere because these deep fried meat treats are destroying children’s palettes and appreciation for “real food”.

Still not convinced? My best friend and I order nuggets now every time we go to Chipmunks and have become Chipmunks nugget evangelists. We have found that you can order a tray of nuggets JUST ON THEIR OWN. This way you get around six to ten nuggets at varying prices depending on who serves you because it’s basically an off-menu product.

I love Chipmunks nuggets so much I once took a photo of them and kept them as my screensaver on my phone. It was a period where my youngest had worked out how to take his nappy off and to be honest I liked the nuggets more than I liked him during that difficult and painful time.

GOOD OR BAD? So good it almost makes up for the fact that a toddler took a dump in the ball pit.

VERDICT:  Thank you Chipmunks chicken nuggets. Your deliciousness has saved many a parent. My love for you cannot be contained.

Update: I have set up a special temporary email if anyone wants to write to me about how unhealthy chicken nuggets are:

Emily Writes is editor of The Spinoff Parents. Her book Rants in the Dark is out now. Follow her on Facebook here.