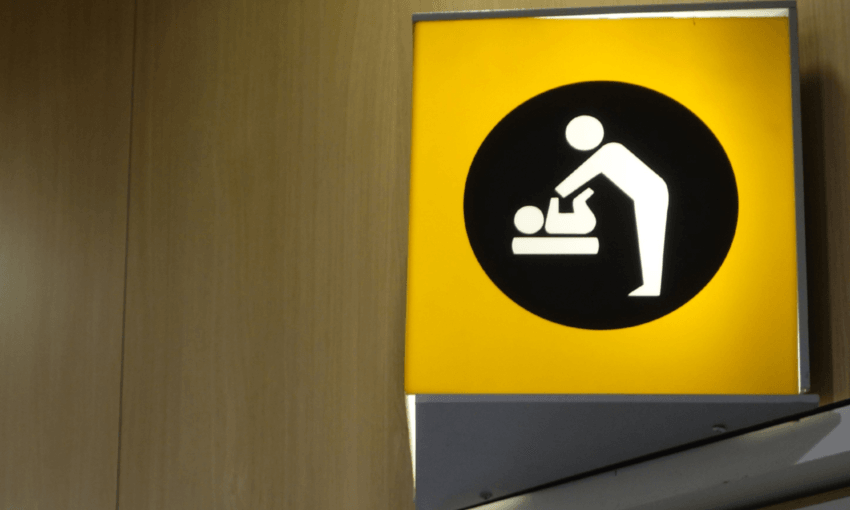 Where are all the baby changing rooms for dads?

Men are increasingly the primary caregivers for kids, but public facilities for them to change nappies in remain woefully inadequate.

This story was originally published on Newshub.

As Clarke Gayford is about to show the world, males are perfectly capable of being primary caregivers. Plenty of them are keen to take some time off work and do all the cuddling, feeding, bottom wiping and mindless loved-up staring that looking after a baby involves.

It isn’t for everyone, but it is undoubtedly a role that does not gender discriminate.

So now that the world’s most famous stay-at-home parent is going to be a male, let’s address an issue that every mother is aware of: there are no baby changing tables in the men’s bathroom (usually).

One of the wonderful things about having a babe is that – on a very good day – they can be quite easy to care for.

Especially when that babe is a newborn, it’s perfectly possible to strap your child to your chest in the baby carrier du jour, shove a bottle, spare nappy and some wipes in a bag, and head out the door to meet friends at a cafe, a pub, a cinema or a park.

He will also discover, when he’s forced to lay his darling across a portable changing mat on a men’s bathroom floor – as a poonami fills the feet of a formally adorable, soon to be binned pastel-coloured onesie – that bathroom floors are even filthier than you dared imagine.

Arts and public venues are more with the times – the Auckland Art Gallery, Town Hall and Auckland central library all provide family rooms with changing facilities.

But pubs, cafes, restaurants? Forget it. Here, nappy changing is a woman’s job.

Sexism in building design is a known thing. Consider every women’s bathroom queue at every theatre or concert hall or cinema that you ever been to. And, if you’re a dad out with your baby, you’ll soon come up against that sexism too, in (almost) every men’s bathroom you visit.

Ashton Kutcher knows it. After struggling to find men’s rooms with baby tables on which to change his daughter Wyatt, he launched a petition back in 2015 to encourage businesses to add changing tables to their men’s rooms.

“Families are diverse, and it is an injustice to assume it’s only a woman’s job to handle changing diapers,” said Kutcher. “This assumption is gender stereotyping and companies should be supporting all parents that shop at their stores equally no matter their gender.”

Kutcher, at the time massively influential on social media, had an impact.

In 2016, President Barack Obama signed the Bathrooms Accessible in Every Situation Act, which requires all federal buildings with public bathrooms to install changing tables in both men’s and women’s bathrooms.

In New York City, all new developments must include baby changing stations in every bathroom. That includes cinemas, restaurants and cafes.

These days malls tend to offer a parents’ room – a mix-gendered family room where mums can breastfeed in privacy, and parents can change their kids’ nappies. But even these have proven controversial, with incidents of dads being shooed away by mums weirded out by seeing a male of the species care for their children.

As Harvard writer and educator Clint Smith pointed out on Twitter, the lack of changing tables in the men’s room is frustrating for dads, and locks women into being responsible for every change.

Something that’s really bothered me since we had a kid is how few men’s restrooms have changing tables for babies.

It 1) further perpetuates the notion that the burden of childcare should singularly be on the woman 2) assumes that men are never out by themselves with their kids.

“Becoming a dad has really demonstrated how profoundly our society is both socially and structurally set up to make it so that the burden of parenting falls primarily on moms and is set up to let dads off the hook,” he said. “I dislike placing the full burden of changing every single diaper on my wife. This whole parenting gig is a partnership.

“It further perpetuates the notion that the burden of childcare should singularly be on the woman, and assumes that men are never out by themselves with their kids.”

Which, as Clarke Gayford is about to prove, is far from true.

Time to catch up, New Zealand.