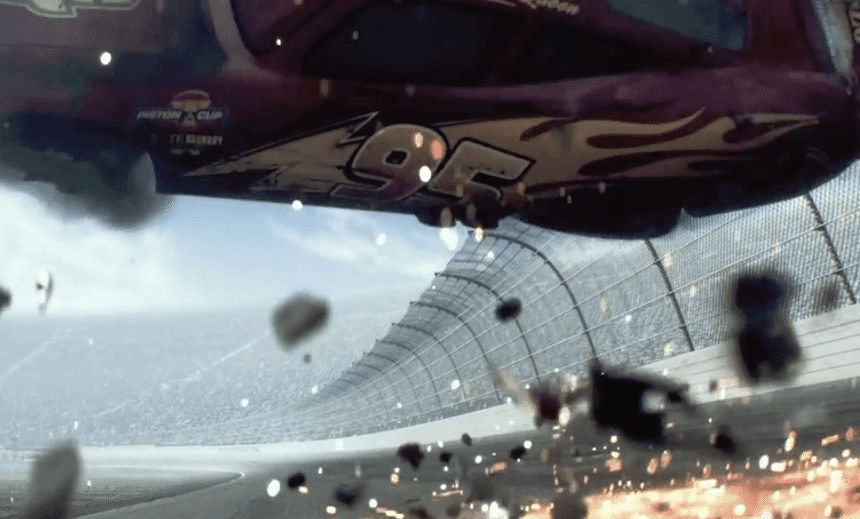 WTF is going on with Pixar’s Cars 3 Trailer? Do cars die?

Chris Ingam is not the only parent who has the shits with Pixar after seeing the trailer for Cars 3. The graphic car crash that comprises the trailer suggests hero to many children Lightening McQueen has carked it. Chris asks the hard questions – can cars die and why the Hell do they need to anyway?

The teaser trailer for Cars 3 (that’s the third instalment of Pixar’s Cars franchise, if the title didn’t give it away) has just been released. It’s dark, it’s gritty. It features the heroic Lightning McQueen hurtling around an oval race track, gaining speed and overtaking his rivals. And then…Holy shit he flips! In slow motion smoke and sparks and debris are flying everywhere…

What the fuck just happened?

I dunno. All were given is a fade to black and the promise that ‘From. This. Moment. Everything. Will. Change.’

This moment being Summer 2017. That’s Winter 2017 in our part of the world. Six months away. Come on Pixar! That’s a bloody eighth of the life of your target audience.

Lots of words have been thrown around in admiration of the trailer on the Twitter. Mature. New direction. Dark. Exciting.

Absolutely fucking terrifying is not one of them, though, and it should be.

Because let’s not forget that Cars is a film franchise about talking cars that do racing. That is frigging audiovisual cocaine for kids between the ages of two and six. Kids who watch shit like Fireman Sam and Paw Patrol. In those shows sure there are emergencies (like Mike Flood getting chased by a giant snowball, Norman Price driving his go-cart into the sea, or some baby turtles not being able to cross the road) but they’re easily solved within 15 minutes and at the end of the day everyone is happy and eating Pup Snacks whilst a jaunty tune is ear worming its way into parents’ brains. These kids CANNOT and WILL NOT deal with a cliffhanger trailer implying that they favourite anthropomorphic vehicle might be broken beyond repair. And especially not for SIX FUCKING MONTHS.

‘But the trailer is aimed at existing fans of the first two films, who are in their mid to late teens,’ Pixar might say. IT DOESN’T MATTER. This is a trailer for a film featuring talking cars. It is playing before Disney films which I presume you want us parents to bring our children to see. Of course young kids are going to see it and be traumatised and ask their parents endless questions about car accidents and mortality. It’s a terrible sudden ambush on children who have lost loved ones in car accidents or been in car accidents themselves.

I get that this isn’t the first time Disney have had dark moments. Everybody remembers Bambi’s mother getting shot and Mufasa dying, but they were moments followed by uplifting character arcs full of redemption for the adolescent heroes of their respective films. For truly terrifying scenes, you have to journey into some of the lesser films.

I haven’t seen the first two Cars movies, but I have seen the aviation themed  spinoffs – Planes and its sequel Planes: Fire and Rescue – about 15 times each. Planes: Fire and Rescue in particular gets its target audience down perfectly: what do kids like? Planes and fire fighting. And it’s not such a bad film. It has Thunderstruck in the soundtrack, which in Palmerston North is an excellent ice breaker with other parents at Flip City or Lollipops:

“Is that your daughter?”

So having watched the second film first, I thought the first one, about an around the world race, must be pretty mild and preschooler friendly. Sure, there’s a love interest, a few slightly risqué jokes and a stereotypical war vet fighter plane (who refuses to fly any more) but that should go straight over a young boy’s head as he focuses on a crop duster flying in an angle through a train tunnel under the Himalayas. Right?

What didn’t go over his head was the reason that Ol’ Skipper wouldn’t fly: his squadron had been almost entirely lost in the Battle of Guadalcanal. And no, this wasn’t revealed in a few off the cuff remarks over a few cans of oil. It was a full several minutes long flashback scene of the full horror of war with gunfire and explosions and ANTHROMORPHIC PLANES WITH EYES SCREAMING AS THEY SPIRALLED OUT OF CONTROL, FLAMES SPEWING FROM THEIR ENGINES AS THEY CRASHED INTO THE FUCKING OCEAN.

‘Daddy, what happened to Skipper’s friends? Will they be alright?’ my four year old asked me. Not once. No, no no. Many, many times. That’s all he wanted to know for the rest of the movie. He didn’t care about the race at all. And what do you want me to say, Disney? Do I explain the horrors of war? Do I try and describe why geopolitics sometimes turns to shit and powerful men send their nation’s young to kill each other in order to try and prove a point? Why can’t we have a film about talking planes flying around the world without having to try and explain more adult themes to a mind that’s barely unable to comprehend the inherent unfairness of having to go to bed when he’s told?

Yes I know I’ll have to broach these subjects of death and war and violence at some point. And I recognise the immense amount of privilege families in New Zealand have – that we get to choose a time and place that we talk to our children about war. Others aren’t so lucky.

But we get to choose right? We get to try to protect our children for as long as they’re little. That’s why we need escapism, like talking cars and planes and dogs that drive fancy rescue vehicles and help round up penguins that have escaped from a train that they were on for some reason. And we need those things without having to explain that we don’t know if Lightning McQueen is dead, and yes sometimes cars do crash when they go too fast and sometimes this hurts and kills people. Especially for kids who are recovering from trauma and just want to see a Disney movie and not think about it for two hours.

So I guess I’ll be avoiding kids films for the next six months so I don’t have to discuss the Cars 3 trailer with my son. And we probably won’t be watching the film itself when it comes out, unless on DVD so I can skip ahead to reassure myself that yes, his favourite car is still alive, and yes, that was such a cruel trick to play on his tiny fans.

Living in the urban paradise of Palmerston North, Chris is a father of two and a husband of one. He has a more in depth knowledge of the Wiggles than he’d care to admit, and can recite Planes: Fire and Rescue from memory, yet somehow has only seen Frozen once. The vet regularly scolds him for allowing his kids to feed their dinner to the dog. He’ll be reviewing regularly at The Spinoff Parents in between reviews you can find him on his blog Netflix and Children and on Twitter.