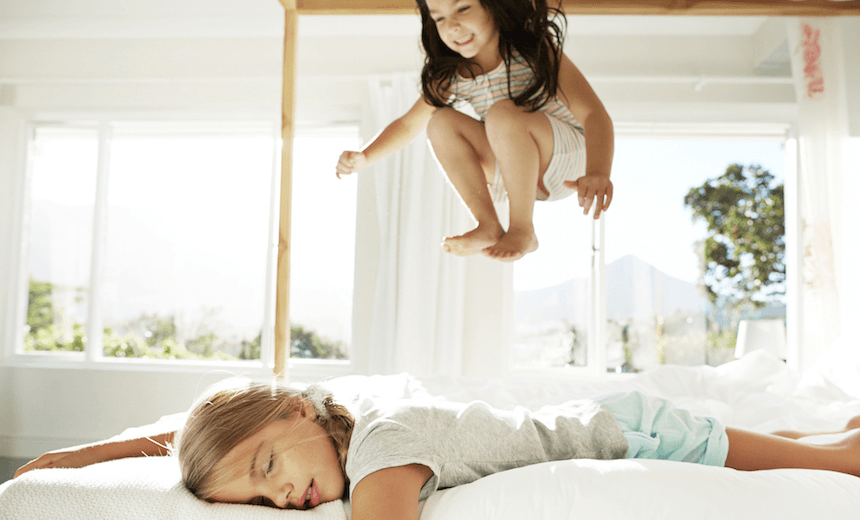 How to survive daylight saving when you have kids

How can a simple one-hour change cause so much havoc in the lives of so many? Emily Writes rants against daylight saving and gives tips on surviving this terrible, terrible time.

For some unknown reason, given that most small children can’t tell the damn time, daylight saving is The Actual Worst for parents when it comes to sleep. Why? Why is it so bad? Nobody knows. And there is literally sweet fuck all you can do about how bad it is.

Granted people will assure me that their no-routine kid has no issues with daylight saving but I do not believe this. I don’t think you’re a liar. Truly. I just have to believe you’re full of it or else I will cry forever.

Let’s just agree that 99% of us who have kids under four have had no fucking sleep since Sunday. And the other 1% need to shut it and just relish how untired they are. Is untired a word? I DON’T CARE.

Anyway, this post isn’t just a rant. I have some tips for you to cope.

Create an effigy of George Hudson

George Hudson was the bug-loving literal mother fucker who came up with Daylight Saving (he was also, to our everlasting national shame, a New Zealander). Incredibly, he had one daughter. But let’s face it, he probably made his wife Florence do everything. That’s probably why she died well before him – because of all those extra hours she had to fill when she could have been sleeping. Apparently this monumental toolbox wanted two hours for daylight saving. Which shows what a massive chode he was*. Thankfully he’s dead. He died in 1946. I checked. The hell we endure every April and September is due to Old George wanting to torture insects. So create an effigy of George Hudson. Parade it through the streets. Set it on fire. Howl at the moon.

* I’m sorry if you’re a descendant of George, he probably wasn’t a penis.

Be careful about screen time

There’s a reason why you should not use screens too much – and that’s because it won’t have the zombie effect on your children that you need it to. If you let them watch too much TV it will stop working, and by working I mean that it won’t actually silence them at 4.30am. As joyous as it is to watch 16 hours of Fireman Sam before you get up and cry in the shower, I recommend switching up screens so they don’t get too complacent. Give them your phone, then your laptop, then the TV, then the iPad or whatever other devices you have. Chuck on It or some other children-getting-eaten horror movie and scare them into silence.

Start a cult and refuse to honour daylight saving

Wake up Sheeple! Who says we need to turn back our clocks? What has the man ever done for us?! What would happen if we just didn’t change to the new time? They can’t control us. I mean they probably can because we’re functioning on two hours sleep a night – but that’s what they want man! That’s how they get us. Join me, we’re going to meet at 8pm outside the clock tower. Oh I mean it’ll say 9pm but I mean 8pm OK? Yeah 8pm…9pm. Look, I’ll stay the full hour…

What better way to spend the extra hours awake you have by filling your Pinterest board? Here’s some fridge magnets I made from my tears and leftover soap scum from the bottom of the shower! Make your kids a sensory board with the hopes and dreams you gave up when you had children. Here’s a wind chime I made of coins to symbolise my dying career and the empirical evidence of the gender pay gap in New Zealand.

Some children will go to bed early. Mine were in bed at 5.30pm the first night. Which of course I paid for because they woke up at 4.30am. But it was nice to have an evening to myself for the first time in a long time. I watched TV and fell asleep on the couch. But you should use this time to go out somewhere or at least think about going somewhere else before you realise you haven’t seen any friends in years and don’t know what anyone else is doing with their lives. Also, send your thoughts and prayers to parents whose children inexplicably go to bed LATER and wake up EARLIER for no reason during the daylight saving war on parents.

You did it! Enjoy the one week where this will happen. I mean sure, it’ll be the longest work day of your fucking life since you’ve been up a full eight hours before you even start – but hey! Productivity! Kindy drop-off is a lot more fun when you’re there early so you can make the most of your child screaming at you that they don’t want you to go. Cherish every moment!

Why complain? Because it’s fun and it makes you feel better that’s why. You thought I was going to end on some nice note here about how much we all love our children and how it’s all worth it didn’t you? Well, of course that’s true. But also I’m in it – it’s Friday or Wednesday or whatever fucking day it is, and I’ve been awake for six months or however long it’s been since we put the clocks back. So fuck daylight saving. I will write something nice again when I’m not so fucking tired.