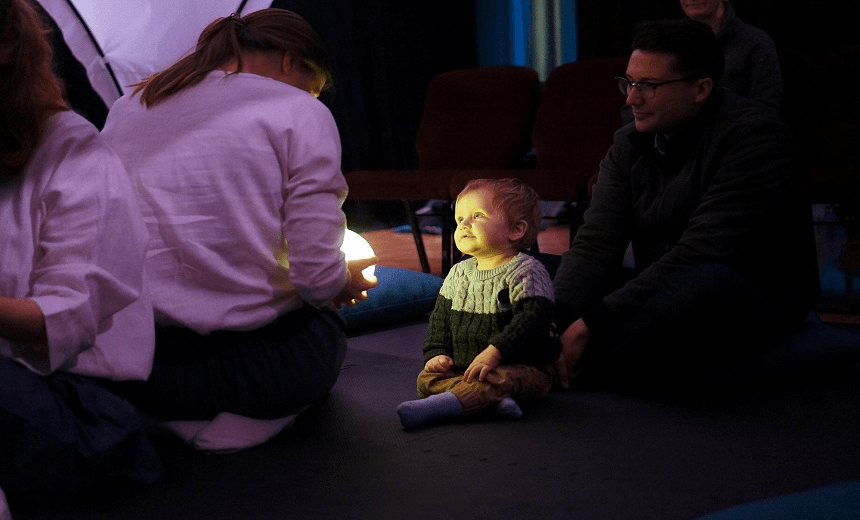 Why we need more theatre – for babies

The arts are meant to be for everyone. But are they really? Mary Sea looks at theatre for babies and why we really really need more of it.

Baby theatre. Theatre for babies. What’s the point, I hear you cry, rotten tomatoes at the ready. Why not just get out a wad of cash and hiff it in the loo? It’s not like babies are gonna remember it.

Heck yeah, we need baby theatre. We need it more than ever.

Cubbin Theatre Company is a professional theatre company dedicated to pre-schoolers which launched its very first production for babies this week in Christchurch, selling out all but a handful of tickets prior to opening.

Even if you have no baby and are not in Christchurch, you can still punch the air for joy because theatre for babies means good things for us all.

Melanie Luckman, co-founder and director of Cubbin’s first production, Up and Away, says that the first time she started thinking about theatre for babies was when she had her first baby, at 29 weeks gestation.

“We spent so long in the NICU and then in [children’s early intervention centre] The Champion Centre, learning about babies’ phenomenal brains and how much they are learning right from the beginning; it wasn’t long before I started seeing the value in offering theatre to babies. Then I found out that Baby Theatre is big overseas, it just hadn’t made it here yet.”

Melanie and co-founders Amy Straker and Hannah Wheeler started asking parents about their experiences taking their baby out to ‘events’ in public. The trio repeatedly got the message from parents that there was very little around in the way of artsy things specifically intended for babies.

Lots of parents complained that they would get the stink-eye if their baby made noise when attending things intended for older kids or adults. There was also a resounding call for publicly accessible arts-related places and experiences that are safe for babies to explore, impossible to escape from, and enjoyable for parents too.

“So many parents we spoke to felt that there were just too many hurdles when it came to taking their babies to arts events around town and they’d end up staying home”.

“How sucky is that? It really reinforces the idea that our communities aren’t as welcoming of babies as they should be, especially when it comes to inclusion in the arts”.

The idea of making theatre for babies has been met with overwhelming support, with the company reporting numerous top-notch professionals offering their services, simply because they were so excited by the idea. ‘We feel so incredibly lucky; all our collaborators have been so generous and so totally into it; Plus the way people like Creative New Zealand and the Isaac Theatre Royal have backed us right from day one has totally bowled us over”, says Melanie.

Cynics suspecting that baby theatre is a waste of resources might consider the following pretty science-dots, asking to be joined. Babies’ brains are at their most plastic in the first three years of life (er, in light of Plastic Free July, note that ‘plastic’ in this context means impressionable or subject to influence. We’re cool, turtles, we’re cool).

In terms of emotional, intellectual and developmental outcomes, an overwhelming body of evidence says that a baby’s first thousand days are quite the influencer. Babies look for evidence that the world is safe or otherwise. If a baby’s first spell on Earth is with an adult who is attentive, responsive and loving, and if their days feature experiences which are soothing, interesting and gosh-darn lovely, the lower structures (fight/ flight/freeze) of a baby’s brain are calmed, thereby making way for the brainy bits of the brain, (a.k.a. the prefrontal cortex) to get on with the business of building a baby’s capacity for thinking and learning.

Baby theatre is one such brain-building experience. Not that it feels remotely swotty.

“The response has been amazing,” says Melanie, “so far, every baby who has seen it has been mesmerised; and their parents tell us they adore it too. We have had so many people thanking us in such a heartfelt way for creating something that honours babyhood and is developmentally appropriate, but which is also kind of magical. It has been very humbling.”

As a speech-language therapist (who collaborated on this production), the thought of Baby Theatre in Christchurch makes me want to dance on the ceiling. For babies to be offered a theatrical experience which models crucial features of early communication so beautifully (such as back-and-forth turn-taking, vocal play, waiting and responding to communication attempts) is a gift to both babies and whānau.

Home is where the foundation of babies’ communication is laid, with the people who know and love them best of all. However, also providing babies with enriching and fun communication experiences outside the home, such as in the form of Baby Theatre, helps to convey that the world is not only safe and welcoming, but also exciting, and they will need all their smarts for the ride. Most wonderful of all would be to have Baby Theatre accessible to all babies, with cost as no barrier.

This fits in with Cubbin’s vision of taking itself to suburbs and small towns all around the country and sharing it for free with babies and their grown-ups who otherwise couldn’t have come.

One measure of a society might be how it treats its babies. Most parents will move heaven and earth to shape their baby’s world to their liking. Heaven and earth are kinda heavy. Surely we, as a society, can help out a bit by taking an end?

More theatre for babies, please. For all babies, everywhere. Let’s be a society who shows that we consider babies to be ineffably precious, and that we are prepared to shape the world just for them, even if it is only for half an hour. Let’s turn that frown upside down.

Mary Sea is a mother-of-two, a speech-language therapist and a breastfeeding peer counsellor.