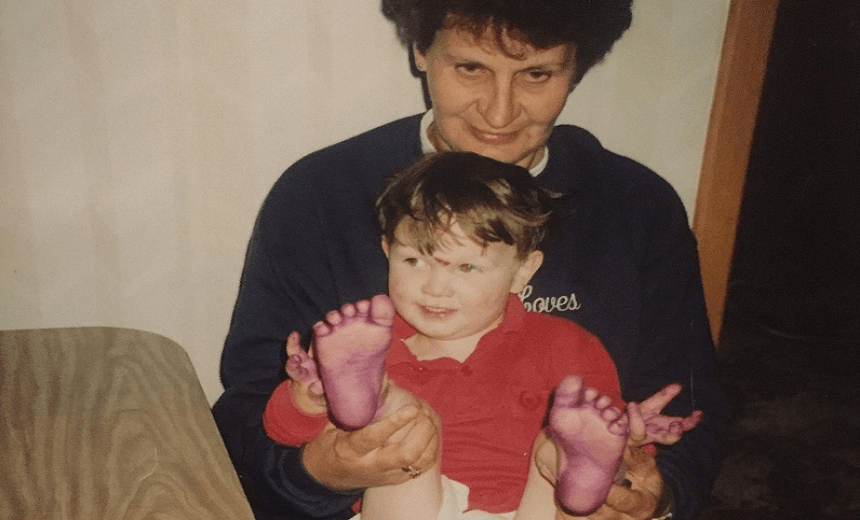 The author as a child

The author as a child

Journalist Baz Macdonald was your quintessential hyperactive child. He looks back on the terror he caused, the productive ways his parents curbed his energy, and the effect it has had on his life.

In public spaces, we have all experienced that one kid who is just mayhem: running up and down the aisles of stores, screaming and shouting, tugging on the sleeves of strangers.

Well, I was that kid.

From the time I could walk, I was a hyperactive terror. Whether it was at home, at kindy or at the shops, I was constantly like a tightly wound spring, ready to unleash my kinetic energy on everyone and everything around me.

This was particularly true of my toddler years, a phase in which many kids can be described as trouble – but I was next level. So much so that I came very close to being expelled from my kindy. I remember one of the instigating factors of this near-expulsion was an incident in which I bit another kid.

I swore up and down at the time that I did not do this – but even now, more than 20 years later, I can clearly remember biting that child. I can even remember the reason I did it: I was annoyed he had the same name as me.

Looking back, I can see how patient my parents were in dealing with me. Tired, frustrated and angry as they must often have been, they were unwaveringly supportive. I mean, I’m exhausted just thinking of what I must have been like to deal with.

I must have been particularly exasperating as the second child, because my older brother was a very thoughtful and intelligent kid. Then came their second child who just spewed energy. Actually, I once jumped up and down on the couch until I did, in fact, vomit.

My parents did their best to thoughtfully assuage my energy but, particularly in public spaces, I was not likely to respond positively to quiet, gentle words reminding me to behave. In especially exasperating moments, my mum would sometimes grip the back of my arms as a non-verbal cue to calm down. Most kids would take this cue and simmer down – not me. I would start to scream at the top of my lungs “She’s pinching me! EVERYBODY, SHE’S PINCHING ME”.

As much work as I was for my parents, I was truly feared by babysitters – of whom I scared off many. Often, it fell to grandparents and family friends to try to fence me in on the rare nights my parents had out. This seldom ended well. On one infamous occasion, while being babysat by my nana, I got into the Gentian Violet. For those who don’t know, Gentian Violet is an antiseptic that dyes and stains anything it touches. It is practically impossible to remove. On this evening, I pulled a solution of Gentian Violet out of the cupboard and proceeded to paint the entire bathroom, and myself. It took weeks for the dye to dissipate from my skin; the bathroom had to be entirely redone.

Now, in my twenties, I see kids who exhibit similar levels of energy – though few as intense as I understand I was – and I feel compelled to tell their exhausted looking parents that it’s going to be OK. I somehow grew into a reasonably grounded person, after all.

For this to be the case, I have endless thanks for the proactive steps my parents took to deal with me. Steps which not only vented some of my energy but that equipped me with skills and confidence which have enhanced my life ever since.

I grew up in very rural Southland, so there were a few high-energy activities that I was naturally introduced to early on, primarily rugby. Unfortunately, like my older brother, I was much more inclined to pull worms out of the ground at a rugby match than to have any interest in the game itself. So rugby was a bust.

The activity that ultimately engaged me was ballet. These days, enrolling a three-year old boy in ballet classes may not seem that subversive – but you have to remember that this was the early nineties in rural Southland. Looking back, I am so proud and thankful that my parents saw this as an option for me, and that they were resolute enough to ignore the sideways glances it surely evoked from some members of the community.

I want to stress that ballet was by no means a cure-all, and certainly not one that took effect overnight. Even in ballet classes I was a terror, and was frequently told off for staring at myself in the mirror and pulling faces instead of taking my position.

My progress into being a functional human being still took endless patience and commitment from my parents; it would still be many years and countless incidents before I would simmer down. But it did productively channel my energy output in a way it hadn’t been before.

I don’t remember particularly loving ballet, but I do remember feeling engaged and focused, and it clearly drained me enough that lessons were followed by much more manageable nights for my parents.

While I didn’t fall for ballet itself, after five years of lessons it led me into a form of dance that I did genuinely love – tap dancing. Ballet had instilled me with a burgeoning love of performing, and discovering tap dancing gave me a real avenue to explore this.

I intensely studied tap dancing for nearly ten years, and through that discovered and developed my skills in other performance forms such music and acting. Throughout my teenage years, I spent nearly every spare moment performing in one way or another – whether in choirs, bands, plays or musicals. Eventually, I even ended up studying theatre at university.

Now I’m in my mid-twenties and I don’t know if I have ever really stopped being that hyper-active child. Even today, I have to be conscious of my tendency to get very big and loud in social settings and I actively work to moderate these behaviours as much as I can. But it was the patience and effort of my parents, grandparents and family friends that allowed me to develop these regulatory skills. And it was my introduction at a young age to performance that allowed me to find productive outlets for this energy.

At my 21st birthday, many family members and friends admitted that they weren’t sure when I was a kid if they would be attending my 21st. They saw a trajectory for me that more likely led to jail than to a functional, productive member of society. I’m sure that if my parents had not been so relentlessly proactive about reprimanding my bad behaviour and rewarding the good, jail very well could have been the outcome for me.

So, to my parents, and parents everywhere of hyperactive children, I just want to say: you are amazing. Thank you so much for the effort, tears and worries that you put into your little bundles of energy – it will be worth it.

Baz Macdonald is a journalist and critic based in Wellington. He has been a children’s storyteller at Vic Books in Wellington for the past three years