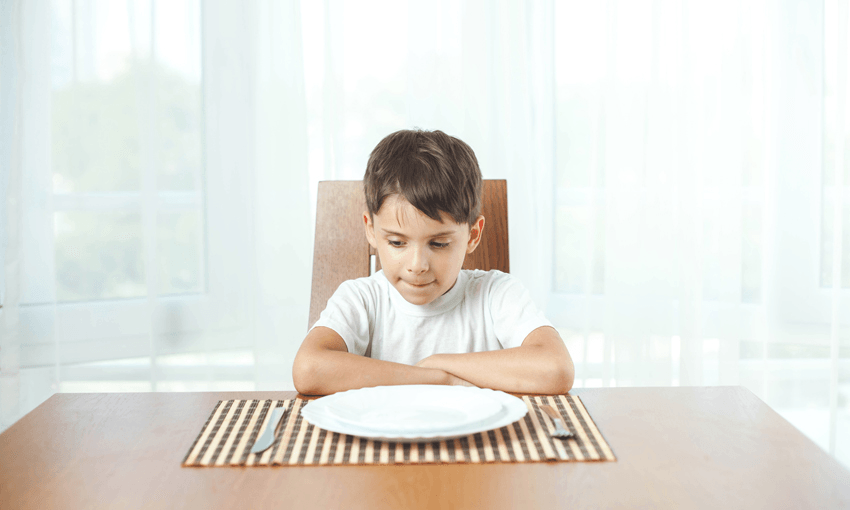 Within households grappling with food insecurity, parents will often choose to go without essentials long before their children do, writes Dr Rebekah Graham.

As a wealthy, food-producing nation, New Zealand has a responsibility to all its citizens to ensure access to sufficient food for health and well-being. Yet currently, almost one in five Kiwi children live in households where there is not enough to eat. The more deprived the neighbourhood, the more severe the food shortage. Simply put, many families don’t have enough money for food each week. Adequately meeting the basic nutritional costs for a family of four (two adults and two school-aged children) costs $225.00 per week. For families on low-incomes (that is, households earning under $50,000 per annum), the available cash for food is far less. Indeed, having that much cash for food after rent is paid would be considered an absolute luxury for many households.

On top of financial stress and difficulty, families facing food insecurity often have to contend with judgemental attitudes and unfair stereotypes. The last 30 years have seen a number of untrue stereotypes, myths and outright lies perpetuated about people living with poverty. The lack of kindness shown towards struggling parents, particularly mums, has been quite breath-taking in its cruelty at times. Somewhere along the way, our society began to despise and humiliate people living in hardship. Yet it wasn’t that long ago that Michael Savage, along with subsequent prime ministers, deliberately and intentionally created numerous levels and systems of support for individuals and families. The Universal Family Benefit was one such measure, with some of those in receipt of this cash support leveraging it as a deposit for their first home.

New Zealand-based research with food-insecure families tells us that these families are doing the best they can with what they have. The combination of insufficient money and too-high rent requires utilising cheap, readily available and highly-processed products that need little in the way of storage or cooking costs. “Cheap carbs” such as $1 packets of pasta, $1 loaves of bread, and 2-minute noodles keep hunger at bay and stretch out more expensive meal items. Such products tend to be low in nutritional value and are heavily critiqued by nutritionists for their high salt and fat content. However, when there isn’t enough money for food, keeping hungry bellies full becomes more important than meeting impossible-to-achieve nutritional guidelines.

Here are some of the things research participants from food insecurity studies at Massey University and the University of Waikato have said:

“[This is] survival mode food…it’s not that great but it keeps me alive.” – Lea

“If there was only, just say a little bit of meat of something and there was just enough to feed the kids, then I wouldn’t eat, I’d go without eating. Just because I’d rather them be fed.” – Julye

“We went without a lot to feed the kids. We were always hungry, and quite often so were they. Looking back on it, it was really stressful and it went on for quite a long time” – Faye

“I have sleeping pills because they help me. They take the edge off so that I can go to sleep. Sometimes I’ve taken extra and just gone to bed for the weekend to sleep the weekend off because there’s no food” – Meredith

“We really try to give the kids a balanced main meal. We try to get veggies in our evening meals and we try to have a piece of fruit for them to have every day – even if that means we [parents] have to go without.” – Daryl

“I just go without and make sure that my son has got what he needs for his school lunches, breakfast, dinner. And if there’s not enough then I will skip a meal.” – Sheryl

As well as going without, parents do their best to shield children from their fears and worries around food. However, children can’t help but notice the absence of food at home:

“Where he [son] sees at other people’s houses that there’s three of four packets of biscuits to choose from, he would be lucky if there’s ever one packet at home because I see them as being a luxury, and I know that he notices that difference.” – Sandy

“Providing the kids with school lunches is a bit hard. Especially with the two older children that want the bars, they want the cakes, they want the chips… They see everyone else having that at school, and they think: ‘Why can’t we have that?’” – Liz

Despite the parents best efforts, children are well aware of the challenges their parents face and do their best to ease their parents’ worries and/or help provide food. Children have said they’ve gone without so that their (younger) siblings can eat enough. They’ve pretended to have eaten enough and have gone to bed early to avoid hunger pains. Sometimes children will bring home leftovers from school or community events for the rest of the family to eat. Other ‘solutions’ include finding part-time work and using that money to buy food for themselves and their siblings, eating their friend’s lunchbox leftovers, and scavenging in rubbish bins for discarded items.

Families also utilise their social networks, with wider family members and friends sharing surplus fresh produce and pantry items. Additionally, households may draw on emergency food systems such as food banks and food pantries, attend community meals, and forage locally for items. Children may be sent to a relative’s house for the weekend or pushed into paid work. Less socially-acceptable practices include begging, stealing food items from supermarkets, and taking sleeping pills to avoid eating too much. These ways of coping and sourcing food are less than ideal. Constantly relying on others can place additional strain on social relationships, particularly when the need is ongoing. Emergency food systems do little to address the underlying drivers of food insecurity, which are the deliberate under-resourcing of families, insufficient social housing, low wages, and the increasingly high cost of everyday living.

Over time, constantly being unable to afford food increases social marginalisation, leads to a sense of alienation, and disrupts a sense of belonging. Parents report feeling a sense of stigma and shame at not being able to source enough healthy, nutritious food for their family. On top of this, the chronic stress and worry associated with food insecurity makes providing food for the family a difficult and distressing daily occurrence. Compounding their misery is the reality that accessing government-funded welfare support through Work and Income can be a distressing and humiliating experience. Subsequently, despite the existence of real need, people go without much-needed food supplies in order to safeguard their psychological well-being and sense of self from further harm.

Food insecurity has long-term implications for the wider physical health and mental well-being of children and adults alike. Memories of insufficient food reverberate through the course of one’s life. Addressing food insecurity requires consistent, intentional and long-term government-supported strategies and solutions. The proposed provision of lunches for children in schools is one approach that will help. Adequately resourcing families, along with implementing all 42 recommendations of the Welfare Expert Advisory Group would have even more impact for achieving food security and improving the health and well-being of all New Zealanders. Even simply having a modicum of care and compassion for people in difficult circumstances – instead of perpetuating ignorant stereotypes and cruel lies – would assist in alleviating the stress and disdain families face.

We absolutely can – and should – do better for all New Zealanders. This land of plenty provides more than enough for all of us. So let’s end the cruelty and moral policing and instead support families the best we can with what we have, and work towards being a kinder society that ensures all our citizens are fed.

Dr Rebekah Graham recently completed her PhD at Massey University. Her research with families documents the lived experiences of food insecurity within the context of poverty.