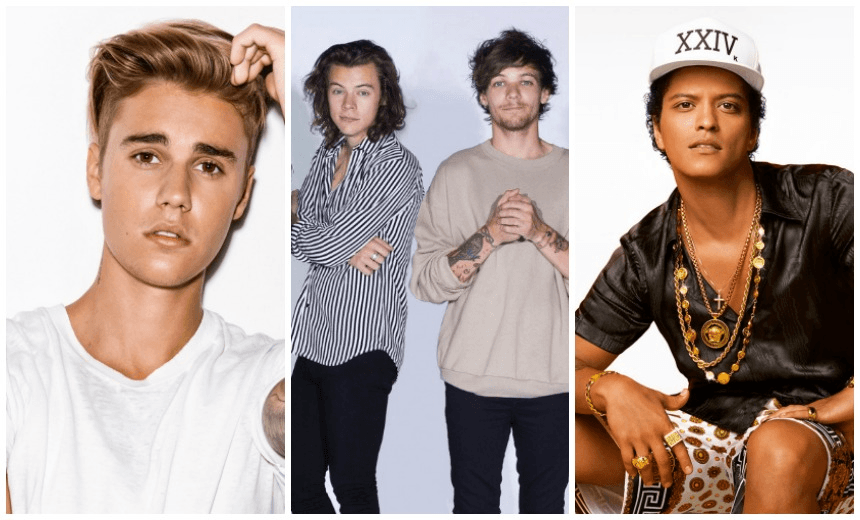 Mary Sea has been gorging on pop music and she’s found the Top 40 is a different world at 40 when you have little ears to consider. But never fear, she has a solution to inane patriarchal ditties.

Having kids changes you in ways you can never predict. One of the biggest surprises for me was the effect it had on my taste in music. Prior to giving birth, my music collection was a fairly broad mixture of folk, jazz, indie-rock and other stuff.

Then I had kids.

Suddenly, what used to be my music felt like hard work. For the first time since high school, my weary self fell into the arms of commercial radio. Almost overnight, Kate Bush was replaced by Katy Perry; James Brown morphed into James Blunt and Miles Davis became Miley Cyrus.

I am not embarrassed about my newfound love of the swinging hits of the ‘90s, Noughties and Today. In fact, it kind of steams my carrots when people pooh-pooh this type of music. Bubble-gum pop can yank you out of a funk in a way that the opaque complexities of experimental folktronica will struggle to do. Tuning in to the Top 40 at the age of 40 has been a bit of a revelation to me, however.

My problem isn’t with the music. It’s with the lyrics.

Specifically, those of the guys singing about the girls. Some of the songs are fine, but a huge number have the distinct whiff of misogyny about them. Turn on the radio, you will soon see what I mean. Countless gents warbling away about women as though they are nothing more than pleasure dolls with a pulse, only interested in their reflections and men that go ka-ching.

What a sad way to view half the population. Not to mention boring – it’s duller than the long-range weather forecast. Someone get me some NoDoz.

Everyone loves a love song, and we don’t necessarily need Romeo to croon about Juliet’s ability to demonstrate Pythagoras’ theorem. I am simply saying that it is entirely possible to sing an ear-wormy song about a (cue: penetrating gaze) ‘Good Time’ while treating the woman in the song with a modicum of depth, nuance and R.E.S.P.E.C.T.

Take Leonard Cohen. It’s clear from his lyrics that he and the rabbits had more in common than the love of a good lettuce, yet he managed to sing about women as if they were – gasp – people. And he had tons of number one hits! (Actually, he had none, but let’s not bog ourselves down with trifling details).

Remember when the trolls of the world lost their minds when Carrie Fisher had had the audacity to age in the 32 years between Star Wars films? Her retort was, “youth and beauty are not accomplishments”. Preach it, General.

So, who are these Evil Overlords of the Airwaves?

I don’t want to name names, but: Bruno Mars! Justin Bieber! One Direction! The list goes on…

Here’s an example from Justin Bieber’s uber-hit ‘Love Yourself’:

My momma don’t like you and she likes everyone

And I never like to admit that I was wrong.

Good on you for caring about your lovely mother’s opinion, Justin. Just remember that you can always respectfully agree to disagree! Your mom will understand. Let’s continue:

And I’ve been so caught up in my job, didn’t see what’s going on

And now I know, I’m better sleeping on my own

If you like the way you look that much, oh baby, you should go and love yourself.

Um…ex-SQUEEZE me? Prithee, good sirrah; I gently point out that it is you and your mate, the patriarchy, who have been getting rich from convincing women of the importance of their physical appearance since time immemorial, and now you’re telling us to quit being hung up on our looks?

Give us a Kit Kat.

This is just one example. There are truck-loads. This kind of dross is insulting to everyone – and I wish kids didn’t have to hear it. They’re worth more than this.

Please understand that this criticism is coming from a place of love. There is a reason that these musicians are at the top of their game, their songs are the catchiest and the most likely to prompt a fit of in-car dancing at the traffic lights. We all need more of that in our lives. But it is expressly because the feel-good aspects of this kind of pop are so uplifting that the yucky bits are so very bothering.

It’s like when Cadbury recently released their new coffee chocolate, with four kinds of coffee-fillings in one handy block. Coffee and chocolate! Together at last! The Ross and Rachel of the confectionery section. What could go wrong?

Well – it’s Cadbury. Cadbury messed with the orangutans by using palm oil (yes, yes, I know they took the palm oil out once we all threw a hissy. But c’mon! Who is mean to orangutans?) and because of how they dumped Dunedin. Dunedin! So brainy and talented, with a lovely personality. We wouldn’t dump Dunedin.

The PC-Gone-Mad Brigade will moan that these kind of shallow lyrics are an age-old feature of pop, and that we should leave well enough alone. I call bullrush on that. Clinging to something worthless in the name of tradition is a cop-out. There are oodles of things that have been around for yonks that we would all benefit from moving on from.

It is time for us parents to take back the power. We can overthrow these FM Oligarchs. We can subvert their knuckle-dragging messages and provide a better alternative to our children. How? Dame Jane Goodall said in her recent interview with (why-isn’t-she-Dame) Kim Hill that the maxim think global, act local is unhelpful; thinking global is too overwhelming and it is by making little changes to that which we see and touch each day that we can change the world. Who are we to argue with Dame Jane? She would never be mean to orangutans.

How, then, do we do it? How do we vanquish these entitled little sugar-hits?

I’ve got the answer – We beat them at their own game: We SING.

We exploit the drive-time between Mr Muffler and Pak N’ Save to sing along, loud and proud, with scant regard for tunefulness. Singing alone should do it because most kids will squirm at any music their parents express enthusiasm for. If you need to up the ante, however, you can always provide your own alternative lyrics.

Here are some examples.

See? Hours of fun. The youngsters will be put off these blighters in no time and parents everywhere will have these crooners eating out of our hands. Move over, Susan Boyle.

Mary Sea is a Christchurch mother of two, a breastfeeding peer counsellor and a speech-language therapist.

This content is entirely funded by Flick, New Zealand’s fairest power deal. In the past year, their customers saved $398 on average, which would buy enough nappies for months… and months. Please support us by switching to them right now.