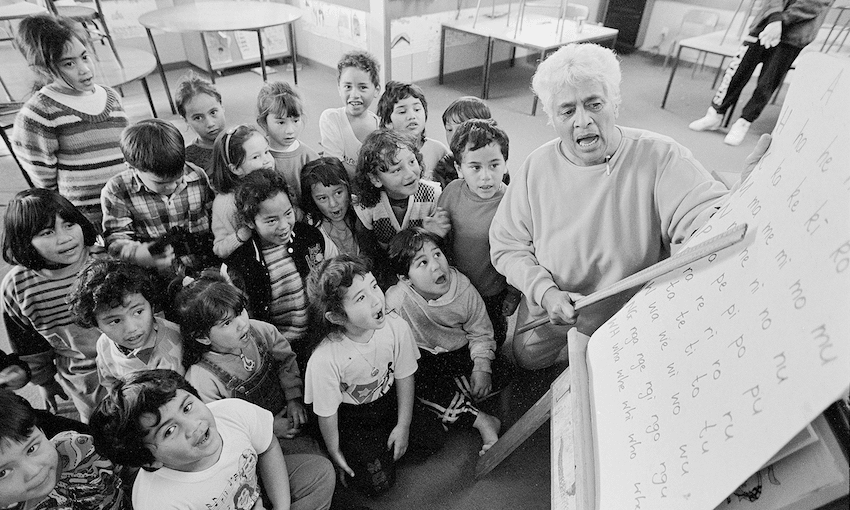 He taonga te reo: in praise of learning te reo Māori as a white kid

The current conversation about the preservation of te reo has been focused on the role and responsibility of Māori speakers, as exemplified by Bill English’s claim that it’s not government’s place to save ‘someone else’s’ language. But what about Pākehā learners of te reo? Eliza Jane looks back on her experience at Auckland’s Newton Central School.

When I was seven, my kura made a decision to establish a te reo classroom within the school. It was a radical step. This was an ordinary state school, committing to a kaupapa Māori unit, with the vision that this would become the basis for a whole-school transformation into a bicultural learning environment. My brother and I were part of the foundation rōpū in the class.

As a child, I was taught that te reo Māori was a taonga, kua mau te reo! Kōrero mai tamariki ma, kōrero, kōrero, kōrero! My kaiako were learning themselves, building a revival of the language, and their goal above all others was for us tamariki to feel connected to the reo, and connected to te ao Māori. It was an amazing gift. I didn’t realise it then, it was part of the fabric of my childhood and I didn’t know how usual it was. I continued studying te reo at high school. I was the only Pākehā student in the class and I compared myself to the kids who spoke te reo at home and were fluent, and felt inadequate, and a bit of a poser because of my Pākehā whakapapa.

When I think of my childhood education in Te Whanau Whakarongo Rua, I am stunned at what they managed to achieve at that school. It must have been quite a whirlwind for the kaiako and the parents. They were building an amazing waka for us. Mixed aged classrooms, project-based learning, a restorative justice approach to discipline, planting out the school to create an urban ngahere, yearly trips to marae for a full week – it gave me an overly optimistic view of what the world was like, that’s for sure! At high school and intermediate it became a quirky side-note – oh yeah I can speak te reo Māori – but we didn’t rote learn our times tables so I take ages to fill in one of those stupid times tables grids that kids have to do these days. Now, looking back with more understanding of what a conventional primary school would have entailed, it seems like for all the chaos of riding a waka that was still being built, it was the most incredible kaupapa to have been part of.

Years passed, much of my reo faded away, I studied other things at uni. Then I got my first job at a law firm, working in the resource management team. We had iwi clients, and suddenly this subject that everyone thought was a strange choice turned into a bit of a career asset. Later, working in the public sector, consulting on a marae while heavily hapu with my first child, I felt blessed to understand the koro who said warmly to me: “Tēnā kōrua.” There are beautiful things about a culture you can only understand through the language. Learning a new language connects you with another world and another way of seeing things. This man saw me as two people. In the proud flush of first pregnancy, in the third trimester and feeling the pēpi move a lot (kick kick kick while I did my mihi whakatau), it felt like the loveliest greeting I’d ever received.

We want to pass down to our children three languages: English, one of my reo tūpuna, the language we are both most fluent in, the one spoken all around us; Hebrew, their father’s first language, and one that connects them to their religion and culture and their family history stretching back millennia; and te reo Māori, connecting them to the place we live, their place of belonging in this world, their tūrangawaewae.

There are so many languages that their ancestors spoke, but that have slipped away – I don’t speak Gaelic, my husband doesn’t speak German or Yiddish or Russian or Czech. It makes it feel more important to me that we nurture the language of the place we live, and the language that my husband brought with him when he arrived here as a child. At the kids’ creche, several of the staff have first languages other than English, and D has developed a keen interest in asking them to translate things into their languages. He tells me in the car “Lanu samusamu is yellow in Samoan, I know because my teacher told me. Atama is head in Japanese. I can teach you how to sing ‘Head, Shoulders, Knees and Toes’ in three different languages!” He likes ‘Te Haere ki te Rapu Pea’ better than ‘Going on a Bear Hunt’, he says it sounds more like a story song. We’ve not taught him as much reo or Hebrew yet as we’d hoped, but he’s absorbed the idea that multilingualism is the norm, so that’s a good start!

Even among people sympathetic to the cause of language revival, learning te reo is often seen as a worthy but boring task, like attending a training session on some new office software. I don’t see it like that. Despite over two centuries of colonisation, I see the tangata whenua continuing to extend a generous invitation to all people living here to learn the language of this place, and take up our position as ngā tangata ō te Tiriti.