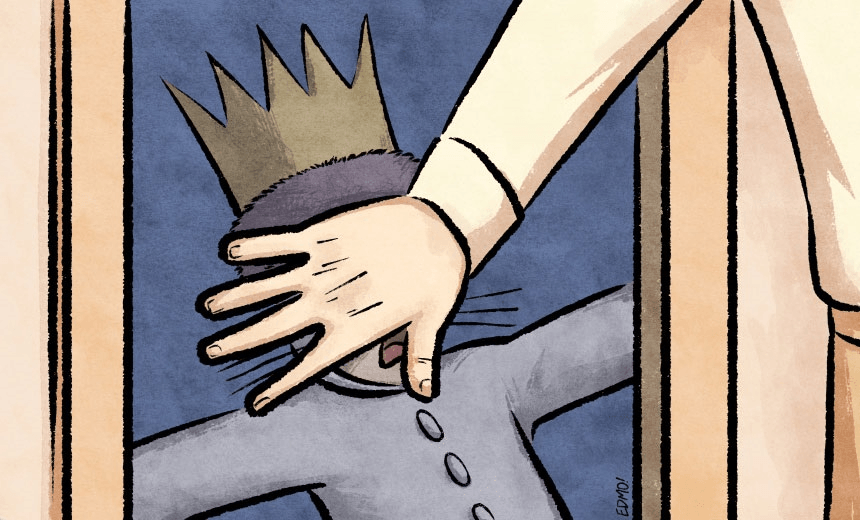 Where the Wild Things Aren’t: on the exclusion of children from public places

Every parent has probably felt the disapproving eyes of others at some point when out with their offspring. Linda Jane Keegan challenges that feeling that kids just aren’t welcome anywhere.

The event was put on by a charitable organisation and was meant to include discussion on how to engage younger members. It was over a weekend, but my partner had to work so I brought our two-year-old with me. Armed with toys and crayons and colouring books and picture books and even a trike, I felt prepared.

So I set about putting all my mental energy into following the dialogue, keeping an eye on my kid, going in and out of the room with him, trying to scan Powerpoints while whispering the words to Where the Wild Things Are in the hallway.

Come the lunchbreak I was fossicking in my bag for my kid’s lunch when someone approaches me. “Are you the mother?” they ask. Yes, I said proudly, he’s mine. But this person wasn’t here to praise him, or me. They said having him there made it too difficult to hear. I tried to apologise, saying I did my best to take him out of the room if I thought he was too disruptive (you know, by just saying random words, like two-year-olds are wont to do). “I know you’re sorry,” they said unkindly, “but I wouldn’t have brought him.”

The words stung. I felt like a small child being scolded. Tears welled up behind my eyes. I was too taken aback to say, but I thought we were here to talk about engagement from my age group? How are we meant to do that when we have children to look after? Instead I went to the bathroom and cried. But only for about 30 seconds, lest my noisy disruptive child bother people trying to eat their lunch, with his carefree childish ways. How dare he be seen and heard?

And how dare I try to be heard? I can appreciate that having a toddler in the room might be distracting. But the fact that a major part of the discussion was around engagement of people in my age bracket and the issue of childcare evidently wasn’t considered – it suggests that how best to get people like me to attend wasn’t considered either. And surely a microphone would have been a simple solution to any difficulty with volume.

Did I mention that I was the youngest adult in the room? By at least a decade.

But I’m not here to criticise this particular organisation, or the aging population of its members. There are plenty of other groups facing the same issue, and the fact that young people nowadays face a much different financial and social climate than previous generations may play a large part in that. But that’s something to talk about another day.

Right now I want to talk about why children are not more welcome in these kinds of spaces. I left the workshop early. And I didn’t go back the next day. Because if I wanted to go without my kid, our family would miss out on a day’s worth of income while my partner looked after him instead. I think that is the reality for many parents of dependent children. I can accept that this one person’s comment wasn’t a reflection of the whole group, but the fact remains that the event was never a welcoming space for children, nor did it take into account that at least some of the people they would have wanted input from would likely be parents of young kids. If we are to be supported being in a space, then our children need to be supported too.

I’m not trying to suggest that we should be able to take our kids everywhere. But the societal default seems to be that no spaces are for kids unless designated as such. It’s not just organisations and meetings I’m talking about. I’m talking about a prevailing attitude that children should be seen and not heard. Or worse, not even seen. Where children – and therefore parents – are not welcome in public spaces that aren’t specifically set aside for children or families. Children are part of our world and lives (even if you don’t have any of your own) and yet we insist on segregating them.

God forbid we dare take them on public transport. Remember that time a breastfeeding woman was asked to get off the bus?

And planes! Sorry, Disgruntled Flyer, I appreciate that it might be a disturbance for you when a child is loud and/or upset on a flight, but you paid for a seat on a plane, not some kind of child-free bubble that exempts you from hearing or being in the vicinity of a small human. We also paid for our seats. We have a right to be here, too.

But it seems all too often that others don’t believe we have that right. I asked a group of mothers about their experiences of having their children in public places. Dirty looks from other patrons in cafes and airline lounges were common – even when the children present were not making much or any noise at all. One mother was in a doctor’s waiting room with a tantruming one-year-old and was asked by the receptionist to wait outside – next to a busy carpark. Another took their child to a rally supporting retail workers and was told by someone that they shouldn’t have their child there.

Again, I want to reiterate that I’m not advocating for children to be in every space. But I want to seriously challenge the underlying idea among us – whether conscious or not – that children are a nuisance and unwelcome in the public arena. I’ve been told stories of a parent not being allowed to read to their child in a bookstore while the other parent browsed, grumpy tutting when a toddler made a small noise during a lunchtime church concert, and all kinds of huffing and puffing about a kid playing quietly on the floor during a writers’ festival session. Not to mention the rudeness towards home-schooled children who dare to be out and about during “school hours”.

But I’ve also been told stories of children and parents not even being welcome in places that have been put aside for them. Kids not being able to freely explore an art museum’s children’s gallery, of a mother being banished from a parents’ room for taking too long to use the space for precisely what it was designed for, stares and glares at a mother taking her child to see a theatre production of Alice in Wonderland or a Pixar movie at the cinema.

Even in spaces with children in mind, our kids are not made to feel welcome there.

Where should our kids be welcome?

One mother put it perfectly: “Kids should be welcome and understood in almost all spaces. I don’t want families to be relegated to only family spaces; I want public spaces to be family spaces. The only places I won’t take my kids are places where there is likely to be sex, violence or danger. I want to take them to the places I like to go to, and for it to be fine. I want to take them to bookshops and restaurants and gigs and parties and markets and festivals and for it to be okay. I don’t want to be shown to the family tent or the kids’ corner.”

And as adults, we can do better than showing them the door can’t we?

Linda Jane Keegan is currently preoccupied with parenting, ecology, and exploring the outdoors. She has been known to subsist on chocolate biscuits, hike long distances, and correct punctuation on billboards. And sometimes, she writes.