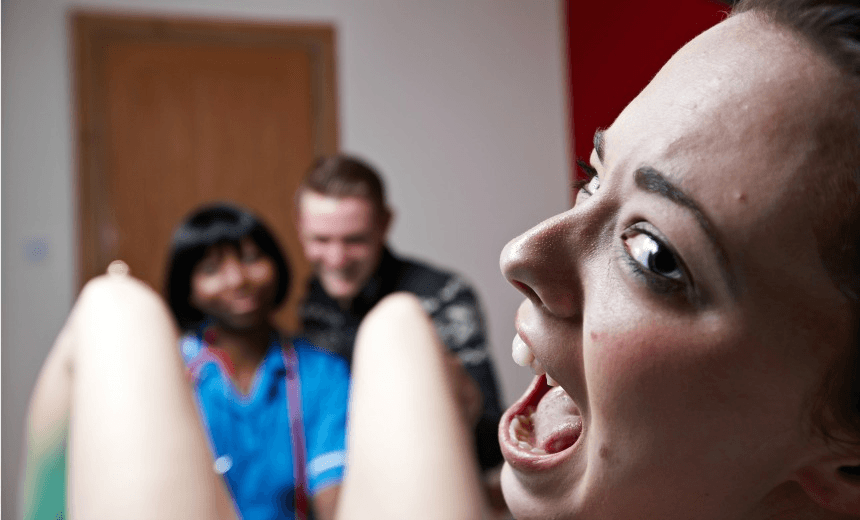 Emily Writes: What I wish my children knew

Spinoff Parents editor Emily Writes considers the things that are important to know when you’re a little human being trying to make your way in the world.

My four-year-old has an almost insatiable desire to know everything there is to know about the human body. He has seen every cartoon guide to the body on YouTube. It was only a matter of time before we hit the hard stuff. While I was trying to stop the baby from hassling the dog and trying to fix the clothes rack which had fallen down again because the dog had run from the baby and knocked it over, I suddenly heard a scream…

Unexpected. Even for our house.

I came in to see a 47 inch vulva with a baby’s head protruding from it on the TV. YouTube in its infinite wisdom had followed up a clip which sings “the elbow’s connected to the arm bone” with a full on and I mean full fucking on birth video. I rushed to turn it off and my son grabbed my hand. “I want to watch” he whispered, “But I’m scared!”

“It’s totally normal” I said. “This is how most babies are born. Some babies come out this way, others come out of a cut in your tummy made by a surgeon.”

He stared at me in horror so I decided to double down.

He whispered in terror: “I came out of your bum?!?”

I sighed as the dog tore across the room being chased by my shrieking two-year-old.

This of course started: “But why? Why out of your fachina?!” “Well, because you were too big to come out of my nose” (I know, that’s not a very respectful parent way of answering him, but I wanted to end the conversation and save the dog).

There are lots of things I wish my children knew. And none of those things involve vaginal birth.

I wish they knew that:

But in the meantime they know what they know. And what they know seems to be the important stuff. They know that when you’re sad you can let someone know and sometimes a hug or talking about it can fix it.

They know that when you see someone who is upset you can try to make them feel better by being kind. They know friends are important and we need to look out for each other, especially people who are smaller than us or need some extra help. They know that mean words hurt – and that we can stand up for ourselves when people say silly stuff like “boys can’t wear pink”.

They know that they’re loved. Always. That they don’t need to do anything to earn that love and there’s nothing they can do that would make us not love them.

They know that being a kind kid is more important than being the smartest kid or the fastest kid. They know little things make a big difference so picking up rubbish on our beach helps penguins and fish and maybe even an octopus and giving some of your hard-earned present money to someone who can use it to help lots of people is a good way to say thank you for all you’ve got.

They know we’re lucky to have what we have so when we are at the supermarket we fill a basket with things for families in need. They know to walk gently on this earth even as they jump and run and fill the air with noise and fun. They know service is important – that helping each other is what we’re all here for.

And maybe that’s enough for now.

Because soon my little four year old will be five. He’ll go to school and learn even more. And I hope he’ll carry the lessons he’s taught us with him. I think about what he knows when I feel overwhelmed or hopeless at the news on TV. The big difference all of us can make – no matter our age or size or what we have or where we live – is something I hope we can all hold tight to forever. No matter how old we all get.

“Did you knowd it was gone hurt like that mama?” he said, staring at the enormous straining vulva on the screen as I crossed my legs tightly…

Yes, most people know it will hurt a lot having a baby, I explained to him.

“Because I knew it will be worth it.”

Some things you just know.