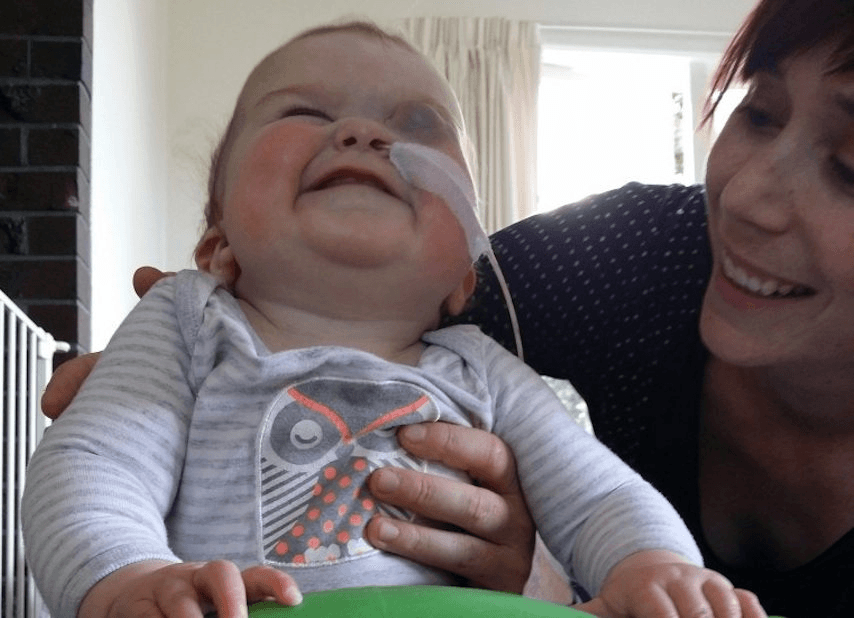 Tessa and her daughter Eva

Tessa and her daughter Eva

Without the lived experience of having a child with health complications you can never truly know what it’s like. One who knows is Tessa Prebble, who shares how it feels to hear the words ‘as long as it’s healthy’ now.

At baby showers all over the world you’ll hear the same five words: “As long as it’s healthy.” It’s said in response to people’s questions about the sex of the baby and whether the mother wants a boy or a girl. The expectant mother will look at her stomach, touch it gently, smile and say “I don’t mind, as long as it’s healthy”. Now of course, she may actually be thinking she would quite like a girl or a boy; she may even quietly grieve the sex of the baby she hoped for, because she knows she has the other. But she’ll say “as long as it’s healthy” like it was a part she was always meant to play on stage.

For most parents they’ll make that statement and never think about that it again – they’ll never have to. But for some, it will come back to them at 4am when the bleeps of the hospital monitors wake them up and they look past their sleeping baby to make sure her oxygen saturation levels are okay. They’ll remember that statement and wonder what they meant when they said that.

No one wishes ill health on their child. No one would choose for their baby to have medical complications and conditions that cause them distress and pain and hospital stays. So it’s understandable and forgivable and reasonable to say “I don’t mind the sex, as long as it’s healthy”. But just like the sex of our baby, and the gender they define themselves as later in life, just like whether our baby turns out to like sports or like pink or enjoy reading, we can’t control who our children are and who they become. We can’t control their health. We can’t control their physiology.

For some parents the thought of anguishing over anything other than keeping their baby healthy feels frivolous and privileged. Because for these parents, when their children are diagnosed they realise that’s all that matters. They are the ones who have to walk down that path they never thought they’d have to. They realise with a jolt and a shudder that when they said “as long as it’s healthy” they were willfully ignoring the possibility that their baby might not be, and that while this might not be a happy thing, they would have to live that path anyway. They have found out what happens when that “as long as it’s healthy” is put to the test, and discovered what was on the other side. It’s not something they can pretend doesn’t exist anymore.

When you find yourself on the other side of “as long as it’s healthy” it’s hard to keep perspective. When I was in the NICU with my daughter Eva and I had been told she had brain and heart abnormalities, that she was blind and deaf and may never walk and talk, I stood in the pumping room and listened to other mothers talk about their babies. I heard a mother complaining of her baby’s colic and I felt a tendril of envy and anger wrap around my chest. It tightened, vice-like, until it was all I could do not to yell the words that were thundering in my brain: that some of us would kill for our babies just to have colic.

I was so new to this NICU world, this medical world, that I didn’t know that for this mother the fact that her baby had colic might be a hard but momentous milestone, because it indicated they had made it out of an incubator, they had made it through the precarious premature stage that so many of the NICU babies are going through. They had colic!

I longed for my daughter to “just be premature” without knowing all the dangers and complications that go along with that too.

Months later when my daughter was out of hospital and I talked with other mothers, I held my tongue when they complained about what I considered then to be normal parenting complaints. Breast feeding. Wind. Patchy sleeping. I looked down at Eva with her NG tube and tape across her face, and I thought, you don’t get to complain. I felt bitter and angry and longed to have the problems that other parents had.

I heard mothers say those words, “as long as it’s healthy” – or worse, I heard them say they wanted a girl or boy and didn’t know how they’d cope if they had the opposite – and I clamped my jaw shut and marvelled at the arrogance of assuming your baby will be this or that. I thought of Eva and wondered what they thought of my life. If having a baby like Eva was something we can’t even consider, if we say “as long as it’s healthy” and refuse to acknowledge or even examine what that means, was I a constant reminder of that possibility – that there was an alternative to that statement?

Then my daughter died and I realised the other part to this equation. Not only was our life together different, but it ended in a way that thankfully many never have to consider. I’m connected to many special needs and medically complicated communities and it’s not infrequent that an announcement is made in an online group that we have lost a member, a child. We live on a precipice where the health of our children can change in the blink of an eye. We live knowing how precarious and precious life is. We live on a knife’s edge.

If I had to choose between having Eva with all her health issues – even knowing that they would take her from me too early – and not having Eva at all, it’s a no-brainer, I’d take that 10 months with her over anything. I’d shush that woman I was who said “as long as it’s healthy” and tell her “She’s going to have some health concerns, but you’re going to love the heck out of her, you just wait.”

These parents have lived the other side of “as long as it’s healthy” and what they know is that while healthy will always be a preferred state of being, “unhealthy” is still a place of love and joy and life. It’s a place of resilience and strength you didn’t know you had, and community that will envelope you and hold you up. It’s a place that teaches you and humbles you in the same breath as it strips you bare and builds you up. And when all is said and done, it’s a place where your child is, and there’s no other place you want to be.

What you learn when you end up in that place is that it’s a place that is part of the human condition and is normal and natural, even when it feels unnatural to see a baby unwell.

I’m not asking for people to wish for children with medical complications. I don’t wish the worry and grief on anyone. But don’t look away either. Don’t say “as long as it’s healthy” as if the alternative is so horrendous and unspeakable that you cannot even acknowledge it. Look it in the face, because for some of us it’s our life, and it’s not unspeakable, it’s real.

And when you do decide to look, don’t reach for pity. We don’t want your pity; we don’t need it. We are strong and our children are stronger. We need your support. Your acknowledgement. Your recognition. Your acceptance. We need for these health issues, or special needs, or disability to be just what they are, a part of life, and for the world to accommodate and make room.

Tessa Prebble is the writer/producer/creator behind The One in a Million Baby. Her podcast began in September 2015 and features interviews with different families living with special and medically fragile kids. It aims to tell the stories of those families so that those who are going through something similar can feel less alone, and those not in their shoes can learn about their lives. Follow the podcast through iTunes, Stitcher Radio or her blog. You can find Tessa on Facebook and Twitter.