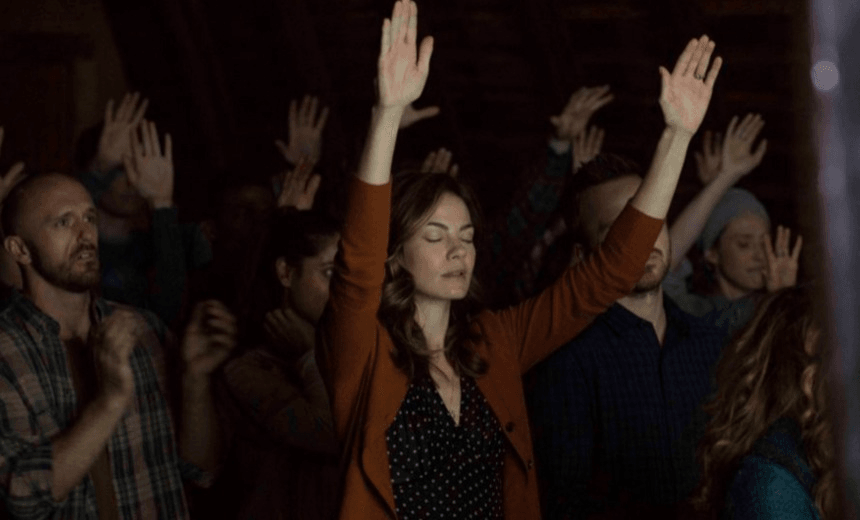 Dom Corry talks to Michelle Monaghan, star of new drama The Path, about soul-searching, green juicing and delving into the world of devout religion.

The new Lightbox drama The Path dares to venture into the world of religion, a dangerous route which most of popular culture avoids. For all the edginess in the New Golden Age of Television, spirituality is still treated like a taboo mainstream subject.

The Path tells the story of a small-but-growing religious movement known as Meyerism. Although innocuous in many ways – they’re basically a bunch of vegetarians who help the downtrodden – it’s not without its darker aspects. Most people wouldn’t hesitate to call it a cult.

The dramatic juiciness of this setting is heartily exploited by the series and there are many aspects of Meyerism that will draw comparisons to certain Thetan-centric movements – but The Path also finds time for a nuanced exploration of what faith can mean in a contemporary context.

I recently got a chance to chat to Monaghan about The Path in Los Angeles.

What can you tell us about Sarah?

She’s very complicated. She’s a Mom and a wife but, above all of those things, she’s a really devout follower of The Path. Almost to the point, which you’ll see as the series progresses, that those convictions supersede her dedication to her family.

I love the idea of playing a woman who seemingly has it all together. Her belief system gives her an incredibly strong sense of control but, when the rug gets pulled out from underneath her, I wanted to watch this woman unravel. I wanted to see it dawn on her that her life was potentially based on lies. What she would do in the name of her faith – for good or for bad.

When we first meet her, Sarah comes across as incredibly serene. Do you have to go to a serene place to portray serenity?

Yes. When you think of people who have a really strong sense of faith – they’re very calm, cool and collected people. Their faith grounds them. I didn’t want to make her a reactive person, so therefore when she lost control or got emotional, it was unnerving to watch. Hopefully, for the audience, it makes it more compelling.

Religion and spirituality is all around us, but rarely explored in mainstream entertainment. Does it feel like The Path is telling a story most shows wouldn’t?

You’re right, it’s in areas that are so universal to so many people’s lives, and yet it’s not something that we explore in the mainstream or pop culture. We were fortunate because we have a fictional religion, so we took a lot of different aspects from various ideas.

Beyond religion, the story is also very relatable with the backdrop of family. We examine what it’s like for a couple to go through infidelity, or what it’s like to raise a teenage son that you’re not communicating with. I think that’s why people will find it interesting – while it’s something taboo, it’s still very universal.

Did you know much about cults or these kinds of movements before you worked on this show?

Not so much. I feel like the research is all around us, especially here [in Los Angeles]. Religion, faith movements, it’s such a universal thing. It’s more extreme for some people. Certainly more fundamental in a lot of ways. In the course of life, you witness people going on their own spiritual journey, myself included.

At some point in one’s life you’re going to feel like a bit of a lost soul. You might be more susceptible to a cult, or simply in search of someone that’s gonna give you the support and the answers that you’re looking for. What enticed me was that these characters find that they are just as lost as the people they’re trying to save.

It’s interesting how often this series highlights the positive aspects of Meyerism.

Which is what I think is great about The Path – it’s just a fringe movement. They really just wanna do good in the world, they have a strong sense of humanity and what’s right and what’s wrong. Then, as something grows, it gets muddled a bit.

I feel like people embark in these movements needing that sort of guidance, or wanting some sort of salvation. Then you start drinking the Kool Aid and, before you even know it, you’re wrapped up  in something that you didn’t mean to get wrapped up into.

It’s interesting how Kool Aid is now the world’s most recognised reference point for cults. Is there a hyper-sensitivity in this show to portraying anyone drinking anything remotely red?

Yes! There is! There’s something in Meyerism called green juice – it’s a green juice. And so, when you get put in “the hole”, then you must drink a lot of green juice.

New episodes of The Path are available weekly on Lightbox, click below to drink the Kool Aid