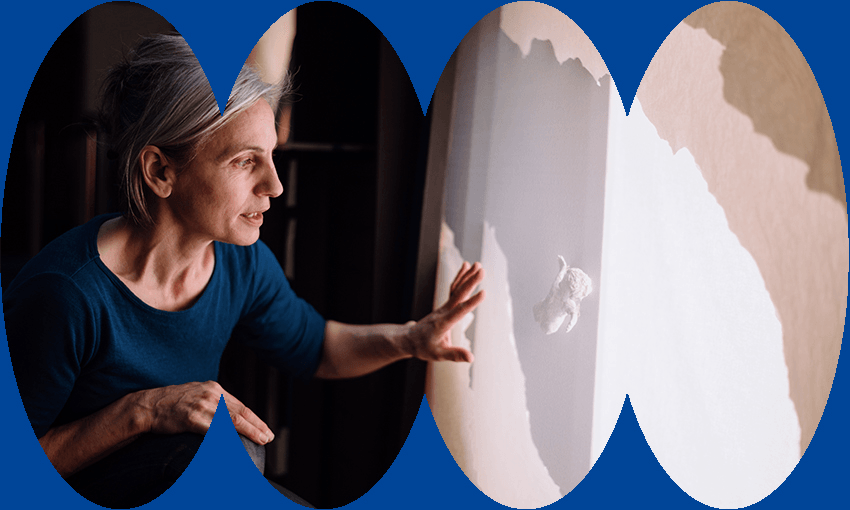 Artist Kate Parker looks at one of the light box installations at I Am Island and Sea (Image: Supplied)

I Am Island and Sea: The art show examining the state of the Hauraki Gulf

Artist Kate Parker looks at one of the light box installations at I Am Island and Sea (Image: Supplied)

An art exhibition at the New Zealand Maritime Museum featuring work by Tāmaki Makaurau children and young adults hopes to shine a light on the state of the Hauraki Gulf.

This content was created in paid partnership with the New Zealand Maritime Museum.

Walking into I Am Island and Sea, an expansive new exhibition at the New Zealand Maritime Museum, is sort of like viewing the world from the third person. In the centre, a giant papier-mache globe hangs from the ceiling, just low enough to be touched. Surrounding it, oversized scenes depict life above and below the sea. A giant kina barren gives a stark warning about what humans are doing to our ocean. A diver plunges down into the depths.

But more than just being “art”, this exhibition – led by Auckland artist Kate Parker – allows attendees to step outside their own reality and view the planet from the outside, both the good and the bad. Utilising sculptural lightboxes, clay paper figures and dioramas, I am Island and Sea showcases the impact humans have on the natural environment but, more optimistically, the way the next generation could change that narrative.

Parker has tackled environmental art before; her illustrated book and lightbox exhibition Kowhai and the Giants focused on the decimation of Aotearoa’s forests by human habitation. “After making Kowhai, I thought I should do something about the ocean,” Parker says.

I am Island and Sea ultimately goes beyond just the sea, loosely following a child’s journey through nature. Visitors first enter a “lighted world” that depicts a child running and laughing through the forest and sea. Next, they travel through a young person’s depiction of the human disrespect of the planet – setpieces created by different school groups from around Tāmaki Makaurau visualise how the environment has been affected by our actions. Each of the six school cohorts – which included an art club and a distance learning group – created their work as “a response” to human impact on the planet, explains Parker.

Alongside the visual art pieces, the sounds of sea birds can be heard, coupled with poignant narration from New Lynn primary school students. “The kids’ voices are the most powerful thing, I think,” Parker says. “They are so aware of things.”

Through their voices, the children make very clear their thoughts on the planet and its present challenges but also provide a view of the future they want to live in. Inspired to record the children after working on a separate project at the school, Parker discovered quickly just how engaged the next generation were with conservation.

“I was going to focus on the Hauraki Gulf but they were not that interested in seabirds and fish, but more about what’s going to happen to the planet. They were so outspoken I asked to record them.” It made her wonder, she jokes, whether she could have been speaking to the next prime minister.

A major catalyst for this exhibition was a “damning” 2020 report into the state of Auckland’s Hauraki Gulf. Two decades after the creation of the marine park, the gulf has been overfished and many once-prevalent species are now hard to find. Among numerous findings, the report concluded that crayfish were “functionally extinct” and populations of fish like snapper had plummeted by almost 90%.

Dr Daniel Hikuroa, a senior lecturer in Māori studies from Auckland University, says the report was hard to read, but ultimately left him with a “resolve and a sense of responsibility” to do something about it.

“What is frustrating is that the reports just add detail to what many of us already know – overall the mauri of the gulf is low,” he says. “The reports only confirm that the gulf is dying a ‘death from a thousand cuts’.”

To help raise further awareness of the gulf’s plight, Hikuroa helped Parker work on I am Island and Sea as an advisor. “The gulf is in peril, as evidenced by the successive State of the Gulf reports, yet this is not widely known,” he says.

“Communicating this is critical and the audience for this exhibition is much wider than that which would read those reports.” The principle of kaitiakitanga is of “significant importance”.

That’s not the same as the English concept of conservation, although there is overlap. “An important conceptual difference is that conservation manages the environment, whereas kaitiakitanga manages human interactions with the environment.”.

While those involved in I Am Island and Sea certainly don’t hold back on their thoughts about the state of New Zealand’s environment, the exhibition ends on a subtly optimistic note. Parker hopes people will listen to – and learn from – what the next generation has to say. “We’re a part of everything so if we don’t respect things this is why we get these problems.”

Aotearoa is shifting into safer hands, so maybe there is hope just yet.

This content was created in paid partnership with the New Zealand Maritime Museum. For more information about the museum and its programmes, click here.