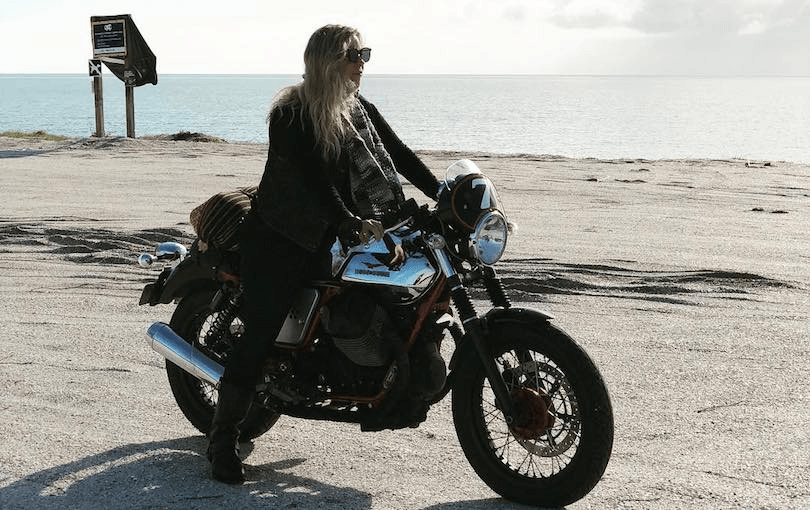 The community of ‘kick-ass babes’ bonding over their motorbikes

Alex Casey spoke to Alley Miller about finding the courage to get on a motorbike for the first time, and how this led her to her tribe.

Alley Miller can recall the most magical moment of her entire life without a moment’s pause. It happened one afternoon when she was heading home on her motorbike. “It was sunset and the sun was streaming through and pointing my long shadow against the road” she says, misty eyed over a salmon and cream cheese bagel. “I saw this amazing shadow of myself on the bike, then I looked behind and there were two rosellas flying on either side of me.” She arrived home certain of one thing. “It finally felt like I had found where I’m meant to be.”

That place is on the open road, on her Moto Guzzi V7 Racer nicknamed ‘The Narcissist’ for its highly reflective chrome finish (“great for touching up the lippy”), flanked by a group of women bikers – sometimes up to 200 of them – called The Litas. Miller describes them as “a community of kick-ass babes that are obsessed with bikes and supporting each other,” the New Zealand chapter encompasses members from age 16 to 66. Just don’t call them a biker gang. “We prefer bike-hers,” she gently corrects me, “we ride bikes to parties with our hair straighteners in the back.”

She’s only been riding for three years, but Miller always knew that owning and riding a motorbike was inevitable. “I’ve always loved motion. Any sort of movement where you’re going somewhere by yourself, I just love that. I think part of my journey was ultimately to get a motorbike. But to get the guts to do it, to actually make that step, was a journey in itself.” It began when she signed up for a corporate boxing fight through her gym. “I thought that if I can get in the ring and win the fight, then I can go and get a motorbike afterwards. That was the deal.”

Miller started training – up to nine times a week – and lost 26 kgs before finally jumping in the ring and winning the fight. “It was the best feeling ever. You feel quite primal in the ring, but still in control. I don’t think women get that primal feeling too much – except maybe childbirth.” She lets out a bellowing laugh – she has three kids under 12. That primal feeling would return, but only when she took the next step and jumped on a motorbike. “I’d go to sleep every night looking at bikes. Every single person took great pleasure in telling me how dangerous they were.”

“Before I’d even started, people were asking things like ‘how are you going to look after your kids if you have an accident?’ I just ignored it, and that need to ride kept nagging away.” She bought herself a Suzuki GN250, and immediately began customising it. “It had big massive indicators, big mirrors. There was nothing cool about it, nothing to make you get out and ride it into the sunset. So I made it look cool as.” The next step was to learn how to ride it, enrolling in basic handling courses through the Ministry of Transport, then onto the road. “You get so many frights, and you’re way out of your comfort zone. You start learning about yourself, how you react.”

Miller was going for little rides to the end of her street, but it was only when she stumbled upon The Litas on Instagram that her confidence kicked up a notch. “They looked really cool. They looked like the sort of people I wanted to ride with – no Willie Nelson lookalikes, or hardcore Harley riders… they look like a hard case.” She signed up online, and met up with a small group of Litas for a beer on Ponsonby Road. “We had the bike connection already, but each women was 110% completely different to one another other, everyone had different stories.”

It was meeting some of the Litas that inspired Miller’s first group ride, a fitting debut for International Female Ride Day. What she didn’t know was that she would be joining 200 other women on the open road. “We got onto the motorway and one of the girls put her hands up in the air. I watched her from my bike and realised I was going 100 km/h. We rode all the way to Mangawhai that day… That was the best day.” It was the most thrilling ride of her life.

Since that day, Miller has committed to heading out on her bike with The Litas at least once a month, and with her smaller, satellite group ‘The Usual Suspects’ most weeks. She’s done rides to raise awareness for The Breast Cancer Foundation, Paw Justice, the school run and even her daughter’s netball on a Saturday (“better parking”). It’s clear that Miller has found her tribe in The Litas. “We’ve all got an experience like my rosella story. When you’ve got that, that’s the biker’s spirit. The biker’s spirit is the rain or shine attitude. It’s water dripping down your back. It’s mascara running down your face.”

Founded in 2015, The Litas creates a unique, supportive space for women in a world traditionally dominated by men, and welcomes anyone who considers themselves a woman. Miller has seen the benefits of this space firsthand. “I think if you invest any time in women, the world’s a better place. I get home from a ride totally and utterly refreshed, I’m happy, I’ve just done something of my own choice, I feel empowered, and I’ve got three kids to show that I know what my freedom is.” Riding is a release from the trappings of everyday life – which is particularly important, says Miller, for mothers.

“Sometimes when you have kids you lose your identity a little bit. But when you’re out on the bike you’re not thinking ‘oh shit, should have got the mince out this morning’, because you’ll die if you think that.”

The Litas connection is one that has also extended beyond the roads, to late night messages about bikes to a deeper presence in each other’s lives. “Our founder runs her own business, so we went to her launch to support her,” explained Miller. “Another Lita just hooked up with a new guy from Tinder, so we all turned up to check him out on our bikes.” The global network of Litas has also never been more accessible, with Miller having Litas penpals in Quebec who frequently send her postcards from the road.

“It’s really empowering to have that sense of belonging, to be involved in something bigger than yourself,” says Miller. “It’s just tenfold when you’re on the bike and on the road. You don’t become like a tough bitch or anything, but you’re just really content. Nothing else comes in, you’re in control of every move that you do and everything that you’ve done to get there is absolutely your choice and nobody else’s.”

Her final piece of advice for any women sitting on the fence about riding is to reach out. “Find someone who inspires you on Instagram, send them a message and tell them how cool you think you are. You have to make contact, because then it will take you on the journey.” The Narcissist is glinting nearby in the carpark, and it’s time for Miller to leave. “I’ve got to go and get my clothes on for the after school run,” she says, sliding on her leather jacket and tightening up her silk scarf.

This article was brought to you by Monteith’s. Monteith’s Phoenix IPA will be sold as 330ml 12 packs (5.0% ABV), RRP $24.99 and is available at supermarkets and liquor retailers around the country.