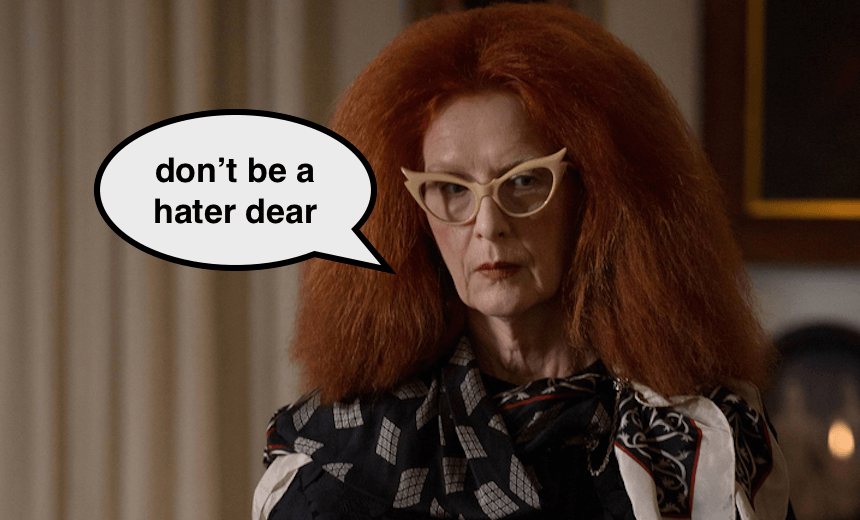 American Horror Story: Introducing Some of the Kickass Witches in the AHS Coven

Alex Casey introduces the key witches in American Horror Story: Coven, and breaks down each of their unique powers in the spellbinding horror series.

The third season in the skin-crawling anthology series American Horror Story follows modern day witches living together in New Orleans, Louisiana, all residing under one roof at Miss Robichaux’s Academy. There’s a more concentrated dosage of witch power here than anything Roald Dahl ever could dream up – and way more terrifying scenes than the bit where Angelica Houston takes off her wig in The Witches.

The show is set in the present, with characteristically AHS flashbacks to 1830s, 1910s, and 1970s. It’s a grisly ride through the bonds of sisterhood, and what it means to live outside of society – knowing full well you have the power to destroy it. “You girls need to fight,” the Supreme Witch warns, “because when witches don’t fight – they burn.” It’s a bubbling cauldron of terror, wicked humour and enchanting performances, and definitely not for the faint of heart. Let’s meet the team, shall we?

Cordelia is the cordial headmistress of Miss Robichaux’s Academy, and the daughter of Supreme Witch Fiona Goode. She had a harsh upbringing under the vicious reign of Fiona, and still harbours a lot of resentment towards her mother. Cordelia’s weakness is that she is infertile, an unchangeable and deeply human tragedy that not even her special witch powers can fix. As a result, she’s incredibly protective of her students. Look out for episode four when you really get an eyeful of her commitment to the role.

Cordelia is a master at potion work, but to be honest what’s the difference between making a potion and lovely drop of pumpkin soup? Her real trump card is The Sight, the ability to see visions of the past and the future. Warning: how she first manifests it might make your stomach churn.

Played by AHS stalwart Jessica Lange, Fiona Goode is the all-powerful Supreme Witch. Responsible for constantly sprinkling drama into the cauldron, Fiona moves back into the Academy after the death of Misty Day. She’s becomes a sensai of sorts to the girls, an older authoritative voice with extremely traditional methods and a zero tolerance policy. Will her ruthless approach to witchcraft pay off? Well that remains to be seen…

To be honest with you, Fiona is a real Renaissance witch. Being the Supreme, she possesses any magical power you can think of, some of which sound made up (kidding, I know they are all made up – or are they?). Here’s a list of just a few things she’s got cooking; telekinesis (controls with the mind), pyrokinesis (controls fire), vitalum vitalis (balance the scales of life), clairvoyance (gains information via magic), concilium (manipulates the mind of others), descensum (project mind to a different plane) and transmutation (ability to teleport around the place).

Basically, she is far from a basic witch. Not to mention her incredible style, and mystical ability to pull off a floppy hat in any situation. I’d kill for that.

The newest recruit into the Academy, Zoe Benson accidentally kills her own boyfriend with her uncontrollable powers and is thrown behind the wrought iron gates to sort her life out. It’s her turn to figure out how to control her unique gift, and she’s got a lot to learn. Zoe is prone to blabbing the Coven’s secrets when under pressure, and recklessly using her powers in risky situations. She’ll get it together though, even if it takes a zombie apocalypse to whip her into shape.

Zoe’s special gift has got to be the most interesting of them all. She is blessed (or cursed, actually) with the ability to cause her sexual partner to haemorrhage to death during intercourse. The concept is a bit It Follows, a bit Teeth, and all terrifying.

Myrtle Snow is the kookiest of all the witches. We know this because she has frizzy Drop Dead Fred red hair and interesting glasses. She is a graduate of the Academy, and was once the head of the witches’ council. She’s a big wig, in both senses of the word, and is at odds with our Supreme floppy hat-wearer Fiona. It doesn’t help that she has a very close bond with Fiona’s daughter Cordelia, but that’s what happens when your own mother threatens to murder you every five minutes.

Madison is a young movie star, played by young movie star Emma Roberts. She also happens to be a witch, seeking refuge from the public eye (and her erratic powers) in the Academy. Self-centred, egotistical and responsible for (literally) squashing boys like bugs, Madison is the vain queen bee of the group. That’s not to say she isn’t liked, though – you’ll see from the first episode that the Coven bonds run deeper than shared bobby pins.

She is a dab hand at telekinesis, first realised when she forced a stage light to hurtle down and kill a critical director as a child star. An Oscar-winning move.

Queenie is a member of the Academy, sharing half voodoo and half Salem witch blood. I may have spoken to soon earlier, because here is one with that definitely doesn’t like screen queen Madison. Queenie grew up in foster care, but is now the star student of the Academy. Full of confidence, despite Madison’s incessant bullying, Queenie demonstrates her sass on the regular as a cashier at a local fast food restaurant. Do NOT try and weasel free food out of her, if you want to keep your arm.

Queenie is basically a human voodoo doll. She is able to transfer and inflict pain on others through doing it to herself – so I’d start running if you see her plucking her eyebrows and waxing her legs. Her pain is your pain.

Nan is the quiet member of the Academy, an enigma who is underappreciated by her fellow students, and thought of as simple by the life-threateningly ignorant outside world. She’s prone to going walkabout, frequently ending up atop ancient burial grounds and unmarked graves. Nan, much like her namesake, is the reliable calm one in the group, always down for a bit of group mediation.

Nan will get inside your head before you’ve even asked her if her name is short for banana. She’s a clairvoyant, and her powers can only grow.

Get to know these badass witches even better by clicking here to watch American Horror Story: Coven (why not just binge all three AHS seasons while you’re at it)