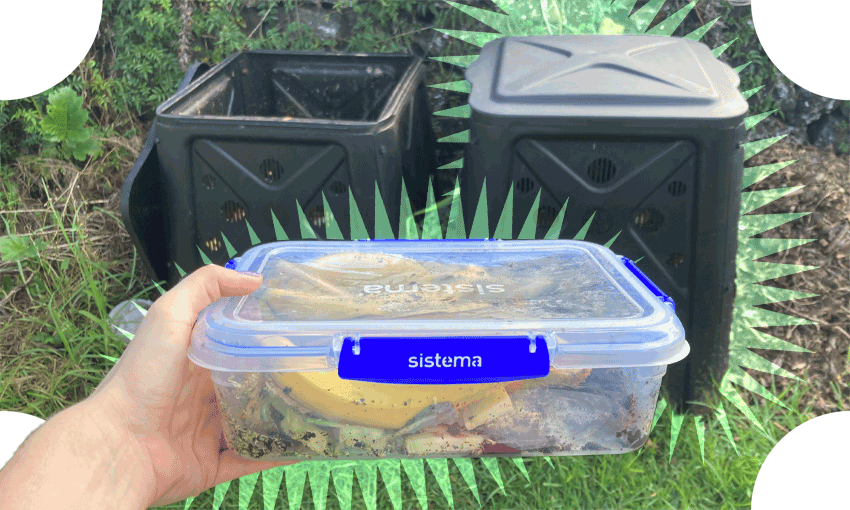 Don’t have a compost bin but still want to do your part for the planet? Alex Casey tries ShareWaste, the app that connects composters with those looking to get rid of food waste.

There’s a lot to love about apartment life. It’s safe, it’s warm, it lends itself well to staring out over the city dramatically like Robert Pattinson’s The Batman. But there are also some downsides, and the rubbish room is easily the biggest one. First of all, it absolutely reeks. Second of all, you have to lug all your drippy, oozy rubbish bags down the hall in front of everyone like a sad trash Santa. Once, I was taking out the cat litter and the bag exploded in the lift. The doors opened and my neighbours stood in silence, aghast at the cat poop nuggets surrounding me like a sad lolly scramble.

But the very worst thing about our rubbish room is that it doesn’t have a dedicated food scraps bin, meaning that our household is guilty of contributing to the ​​100,000 tonnes of domestic food scraps that are currently sent to landfill in Auckland every year. I try to be a good friend to the environment as much as I can – I walk to work, eat very little meat, I use reusable menstrual products, but there’s no getting round the fact that New Zealand’s food scraps contribute a hefty 400,000 tonnes to our CO2 emissions every year.

Eliska Bramborova found herself in the same situation when the idea for ShareWaste was born. She was living in an apartment in Sydney with her partner and had done a quick audit that found about half her rubbish was food waste. “It was basically all fruit and vege scraps and eggshells, there was this huge amount of organic material that we didn’t know what to do with.” She thought there might be a local gardener who would welcome food scraps for their compost, so she took to Facebook and got an immediate response from a woman 20 minutes away.

That arrangement worked well for a while, but Bramborova began to think there might be many more people facing the same waste problems. “We knew the concept was working and that other people would be stuck in the same position – they would like to donate but they don’t know how,” she explains. “At the same time we knew there were local gardeners trying to create more compost for their gardens.” And so the idea for ShareWaste was born: an app that connects apartment-dwelling food scrap racoon-types with local composting legends.

Bramborova’s husband, a software engineer, built the app over a few months and it began to get a “lovely response” from people in their immediate community. That local network grew across Sydney, then across Australia, New Zealand, and then the UK and USA. In New Zealand, the group is sponsored by Auckland Council. ShareWaste is now used in over 100 countries around the world, many of which are not English-speaking. Compost is a universal language, it would seem.

The first step to start composting, she tells me, is to download the app and start chatting to people in your area about what they require for their compost situation. “We really encourage neighbourly connections, we want the compost owners to show you the compost, have a conversation, learn how it’s done and ask anything you might be wondering about.” So I downloaded the app, and began sending messages as my tupperware on the counter began to fill with banana skins, broccoli ends and coffee grounds.

As someone who has largely tried to remove social media from my life, the idea of adding another thing to my phone felt initially daunting. But all doubts quickly fizzled away as my phone began to ping with lovely, encouraging, helpful messages from ShareWaste hosts. One of them told me about the intricacies of Bokashi juice, and another waxed lyrical about their chickens and their favourite snacks.

I found my dream ShareWaste host in Livia, who lived just a 15 minute walk away from my office. She had a cold composting bin, and was accepting all fruit and vege scraps. We arranged a time that suited the both of us, and I headed out on foot with a trusty Sistema full of sweaty banana skins in my tote. On the way I picked up a bunch of food scraps I found chucked on various berms to add to my rapidly-growing compost kitty. You’re welcome, all of planet Earth.

Livia welcomed me with a big smize (she was wearing a mask) and excitedly ushered me to the enormous garden behind her flat. A University of Auckland student and member of the Sustainable Futures Club, she got onto ShareWaste after hearing about it at a Compost Collective workshop. Prior to that, her flatmates had been throwing their food scraps under a tree outside, which created “a bit of a rat problem”. These days, her cold composting bins create nutrient-rich goodness for her vege garden, which is thriving with kale, spinach and pumpkin.

Although her main aim was diverting food scraps from landfill, Livia says the compost process added another layer of motivation. “Turning food waste into compost means you don’t have to buy commercial compost, and that obviously for me as a student is attractive, because then I don’t have to spend money on it,” she explains. Moving to Auckland a year ago, she was shocked to learn that roughly half of Auckland’s landfill is food waste. “The fact that can be turned into really nutrient dense compost has got me extra passionate about it.”

Livia’s learned a lot about composting along the way, including the fact that her teabags of choice are only 80% biodegradable, leaving behind a ghostly teabag-shaped skeleton. Other hurdles she’s faced include her self-consciousness about collecting her carbon supply, aka leaves from the local park down the road. “I had to overcome a certain shyness in myself to just go to the park and take my rake and my bucket and gather up leaves,” she laughs.

After tipping the contents of my container into her compost bin, Livia poured me a delicious tipple of her homemade guava kombucha, the main ingredients of which were grown right in her own backyard, with the help of her nutrient-dense compost. I rinsed the container out (using the dirty water to hydrate her herb garden) and then she brought me to the back of the property to pick some delicious guavas to take home. It felt like a suburban utopia of chatting and sharing, which is exactly what co-founder Bramborova wanted to blossom from the app.

“The community-building is about half of what we do, we really try to create local networks of people who are on the same wavelength, who care about the same things in life,” she explains. “They usually care in some way either for the environment or they are mindful of their own impact, and that’s a good reason to bring people together.”

As I plucked delicious guavas and chatted with Livia about work and uni and life, I realised that ShareWaste had done more than just get rid of my compost, it expanded my world just that little bit more.

Before I left, Livia gave me another hot tip about keeping banana skins in water for three days and then using that to water your plants. She lamented that her lemons weren’t ready so she couldn’t offer me any, but my Sistema was already bulging with guavas so that was quite alright. As I walked down the driveway, we talked about the latest grim IPCC report, and she mentioned that apps like ShareWaste keep her holding on to hope.

“The coolest for me is meeting people who have that interest to save food waste from landfill,” she says. “It really creates a shared reality: let’s try to do something here together for the greater good.”