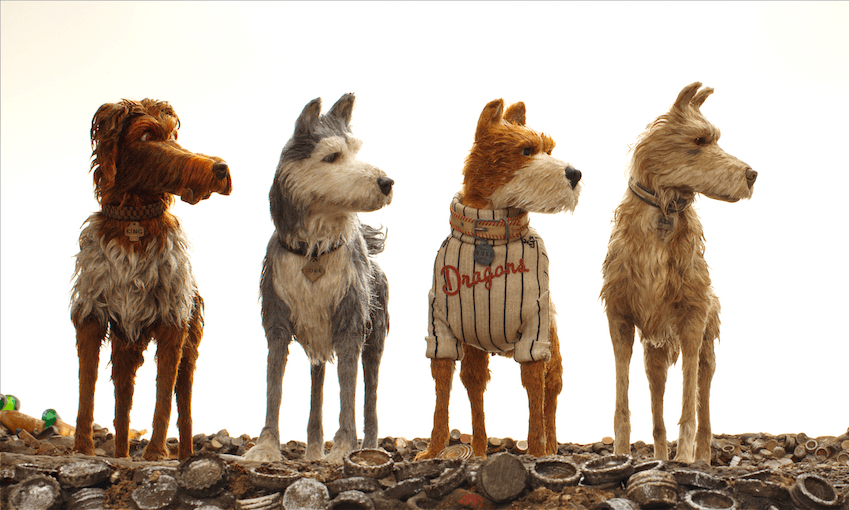 From Bottle Rocket to Isle of Dogs, Wes Anderson just keeps getting better

In the new film Isle of Dogs, David Farrier says director Wes Anderson has produced his most artistic, political and detailed film yet.

My introduction to Wes Anderson came back in 2001, when I rented The Royal Tenenbaums from Video Ezy in Tauranga. I was blown away by this utterly bizarre, beautiful thing I was watching. I devoured it. I bought a copy on DVD so I could keep watching it, and at some point I purchased a full red Adidas tracksuit. Years later, I got the Criterion Edition – a series of re-releases for film nerds – which came complete with a restored digital transfer, still photographs by set photographer James Hamilton, and an essay by film critic Kent Jones.

“Simply stated, Wes Anderson is the most original presence in American film comedy since Preston Sturges,” Jones wrote. “He has a similarly keen ear for gaudy dialogue; a gift for surprise and for topping one joke with a bigger one; a knack for rooting out archetypes hitherto untouched in movies; and a penchant for making films that feel like pageants, composed of a democratically diverse cross section of humanity.”

That critic’s use of the word “pageant” has stuck with me ever since, because that’s what all Anderson’s films are, really – a beauty contest. You could pause any moment in any of his films and have a beautiful bit of art to hang on your wall, or at the very least a nice desktop wallpaper featuring Jeff Goldblum.

The essay also touched on another aspect to Anderson’s films – the fact that they “are fixated on failure, hesitation, depression”. They’re deeply dark comedies, where characters try to commit suicide, suffer depression, and unpaid interns are threatened at gunpoint. And the audience is completely charmed and intoxicated the entire time.

And his newest film, Isle of Dogs, is perhaps peak Wes Anderson. Its detail – created frame by frame in animated stop motion – is exquisite, creating beauty even in the ugly setting of an island built entirely from trash, and a city run by a tyrannical mayor. Anderson’s understated humour cuts through a nuanced story that is both dark and deeply political. Its heroes are brave, unlikely and unusual, and Anderson empowers those without any power. The voice cast is clever, and packed with Anderson’s usual starry suspects. In a long career that has seen his aesthetic and influence develop with each film, Isle of Dogs finds Anderson at his most artistic, his presence visibly weaved through every story beat.

Anderson’s first film saw the light of day in 1996: Bottle Rocket, grown from a short film he made with Luke and Owen Wilson. It was a hint of his ability to build long term collaborative relationships, as Anderson went on to write his next two films, Rushmore and The Royal Tenenbaums, with Owen Wilson (he and his brother are also familiar on-screen faces in many of Anderson’s films).

Hollywood royalty, from Tilda Swinton to Edward Norton, Anjelica Huston to William Dafoe, have likewise become regular collaborators with Anderson; they seem drawn to the unique demands Anderson’s characters place on actors. When a new Anderson production comes out, the cast list is often mind-boggling, a who’s who of the top players in Hollywood. On a long A-list of stars, Isle of Dogs features the voices of Bryan Cranston, Harvey Keitel, Scarlett Johansson, Jeff Goldblum and Yoko Ono.

Speaking of which: Bill Murray.

Wes Anderson took an already incredible actor and made him more incredible. Bill Murray joined the family for Rushmore, coming on board because he was such a big fan of Bottle Rocket. He worked for peanuts and the two began a collaborative relationship that would cement Murray as the modern day hero we all know today. The Guardian called it Bill Murray’s “second career”.

For something so creatively powerful, the friendship started quietly enough. “The first day, Anderson delivered his directions to the star in a whisper, so he wouldn’t get embarrassed if Murray shot him down. But the actor made a public show of deferring to his director,” Newsweek’s Jeff Giles wrote at the time.

Murray has appeared in every Wes Anderson movie since, including Isle of Dogs where he plays Boss, a gruff mutt who was former mascot of the Megasaki Dragons little league baseball team.

Another actor catapulted into indie fandom by Anderson was Jeff Goldblum. Like Murray, Goldblum already had a string of hit films under his belt, from The Fly to Jurassic Park, but Anderson’s films let Jeff Goldblum truly be Jeff Goldblum in all his utterly bizarre glory. It’s my firm belief that without films like The Life Aquatic and The Grand Budapest Hotel, we wouldn’t have the utterly unhinged and pure-Goldblum moments we saw in Taika Waititi’s Thor: Ragnarok.

When The Life Aquatic came out in 2004, Goldblum said how hard he works at his craft, and how Anderson let him do that. “I’m a craft geek. I’m always trying to figure out, ‘how do you use your time best, so that it comes out better?’ I look at some things that I have done and I go, ‘Geez, I am lucky to have gotten a chance to keep doing it after this, I don’t like the way that came out!”

Right now, in 2018, Goldblum’s feeling pretty good about his craft, and his new dog character, Duke. “I love his name – Duke. It reminds me of – would you know how I am talking about if I said *breaks into song*  Would you know who I was talking about? Of course, Duke Ellington!”

Isle of Dogs feels like the most composed film of Anderson’s career so far. Every shot is a thing of beauty, to the point where you sometimes wonder if Wes Anderson has gotten to the point of parodying Wes Anderson. It’s Anderson’s second foray into stop motion animation, arriving almost a decade after Fantastic Mr Fox. For a director obsessed with very specific color palettes, symmetrical framing, bold editing, and very clinical camera moves, animation seems almost the perfect playpen for the 48-year-old. From The Darjeeling Limited to Moonrise Kingdom to The Grand Budapest Hotel his films just seem to get more deadpan, more detailed, and more Wes.

Isle of Dogs is set in a futuristic Japan, where all dogs (riddled with dog flu) have been banned to Trash Island. On the mainland, corrupt politicians and cats flourish, while dogs are left to starve and forage for scraps. The arrival of a small Japanese boy on the island, searching for his lost pet, changes everything.

For such a charming film, it’s the first of Anderson’s that attracted controversy, with some critics accusing it of cultural appropriation and employing white-saviour tropes. Much of this comes from Anderson’s decision to leave Japanese speaking characters without English subtitles. Their dialogue is either a mystery to an English-speaking audience, or picked up through an on-screen translator. It’s been debated in think pieces and podcasts since it premiered in Berlin, but Moeko Fujii recently wrote in the New Yorker that Anderson’s decisions enhance the film.

“His commitment to showing the daily rhythms of a living, breathing, Japanese people reveals itself not only in his cast of twenty-three Japanese actors but in his depictions of how exactly a Japanese TV-news anchor transitions to a new topic (“This is the next news”), what milk cartons for elementary schools look like (labelled “extra-thick”), or how a couple of scientists might celebrate—with a clink, “Yo—oh!,” and a clap” writes Fujii.

“The film invites a kinship with a viewer who will find these banalities familiar, and lets these moments flow by, unnoticed, for those who do not.”

And while Isle of Dogs is set in Japan, it’s hard not to think of America when you’re watching this story play out. It’s the tale of a group of literal underdogs rising up against a power-hungry, unhinged ruler – one who is religiously anti-science, whose followers pelt a scientist with rotten food just for reporting the facts.

In all of this, Isle of Dogs cements Anderson’s place as a cinematic auteur. He has such a singular vision you only have to watch mere seconds of a trailer to know a film is his. The colours, the cutting, the costumes and design – his is such a unique vision, carried and developed throughout his career, that you have to call him an auteur. There’s a reason those actors keep coming back: they know they’re in good hands.

Isle of Dogs is perhaps the strongest testament to that yet.

Isle of Dogs – a new film from Wes Anderson, Director of Fantastic Mr. Fox and The Grand Budapest Hotel. See it in cinemas from May 3.