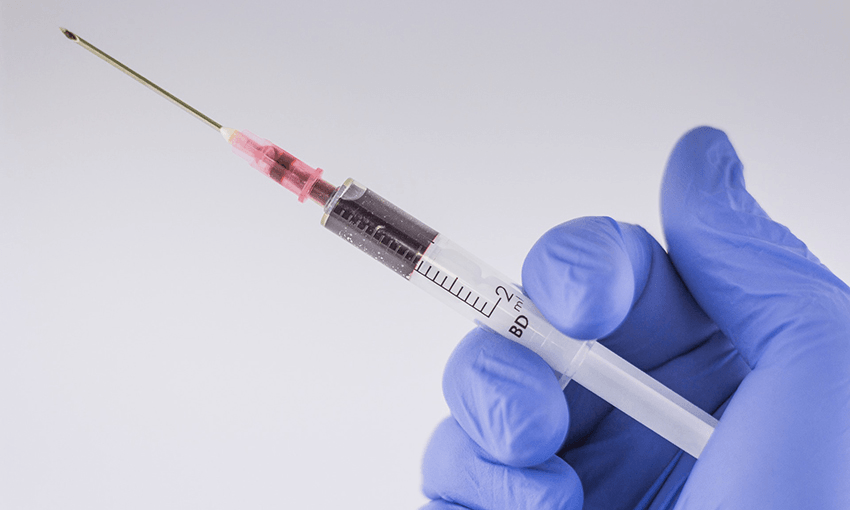 All the stupid myths about the flu shot, busted

Needles may be scary. But do you know what’s worse? The flu. Alex Braae got over his fear and got the flu shot, for the greater good.

I haven’t had a flu vaccination in a couple of years. In that time I’ve also had the flu a couple of times. When I let this slip in the office a few weeks ago, the looks of horror shamed me into sorting it out this year, in fear that I would infect everyone in the room. The good ship Spinoff won’t be sunk on my account.

But I still had a couple of questions. The thing is, I’m not really a massive fan of needles. They’re jabby and uncomfortable. I’ve also heard some really bad things about the flu shot, and besides, was there even any point in getting it? Surely the whole thing was completely overblown.

So before I wandered off to the local pharmacy to get the jab, I wanted some answers. Fortunately, Kerikeri GP Chris Reid was happy to correct all the misinformation flying around about the flu shot.

Okay, my first question, why do I even need the flu shot? Surely nobody has died of it since the great Spanish flu pandemic of 1918?

So it can still be dangerous, but doesn’t it only affect people with weak immune systems? I’m strong and healthy as a bull that doesn’t have mycoplasma bovis.

No, it’s not necessarily just people who are frail and young, though some people are more likely to have complications. But anyone can get the flu. That’s the crux of the matter, it’s a serious disease. And while most of the population doesn’t get the flu in a standard year, it’s one of the biggest health issues for the Ministry of Health because about 20% of the population will get it in any given season.

I’ve had the flu before – doesn’t that mean I’m now immune to it?

The problem with the flu virus is that it mutates all the time. The World Health Organisation is forever trying to use a crystal ball, to work out what’s happened in the northern hemisphere, to predict what we think will happen in the southern hemisphere, and we don’t always get it right.

Well I was vaccinated last year, so that must mean I’m still protected right?

Well, this year there’s four completely different and new strains that have mutated. And the flu jab isn’t the live virus – think of it as smashed up parts of the virus – so it causes your body to produce antibodies and will give you immunity for six months or so. But next year there’ll be a new strain, and you’ll need to create new antibodies, and the only way to do that is by either catching the flu, or getting the new jab.

Look, I should be fine anyway, because everyone else in my office has been vaccinated. That’s how it works right?

Well there is a financial aspect there – the flu costs workplaces and businesses just over a billion dollars in sick leave and lost productivity every year. So bigger businesses will often offer free flu shots, they could say they’re being nice to their people, but they’re also being quite pragmatic and business savvy.

Being honest, everyone else getting the flu jab doesn’t necessarily mean you won’t get it. And while your boss might be happy if you stayed in the office all the time, you’re probably going to go to the pub or the supermarket at some stage too, and you might pick it up there, someone with the flu might sneeze on the nice looking oranges you take home. You can catch the flu at a range of about six feet, it’s quite infectious.

The other way you can get it is from children, who are the most lovely little spreaders of the flu. And that’s an interesting debate, because we don’t offer free vaccinations for all children.

Now I’ve heard that getting a flu vaccination means you actually get the flu straight away – is that true?

No, so that’s an important myth to dispel. You categorically cannot catch the flu from the flu jab – it’s an impossibility. We’re not giving you the virus. Some people may like to say they’ve caught a sore arm, but that’s about it.

A high school friend posted on facebook that vaccines cause autism – what do you say to that?

Ah, the perils of social media. It’s a huge problem when a layperson, as it were, can have a bigger social reach than a professor of immunology. It’s a dangerous field to get your information about these things.

And look, there’s absolutely no evidence for it. The myth is linked to a damaging piece of research out of the UK on the MMR vaccine, and the research was proven to be false – it was a rare case in which the medical journal actually retracted the article. But it caused a lot of damage because the person who wrote it went around the world campaigning on it – almost like a personal vendetta. My colleague up here Dr Lance O’Sullivan did a very good thing when he got up on the stage at the screening of Vaxxed and told the people there that it was wrong.

But pregnant women should probably avoid getting vaccinated just in case right?

Quite the opposite. Flu vaccines are free for pregnant women, and that can be really important – they’re the people we really want to get the flu jab. If you’re pregnant and you get the flu, you come off a lot worse – you’re five times more likely to end up in hospital. Having the flu during pregnancy can also be linked to low birth weight, miscarriages and complications.

The other thing is, women who get the flu jab while pregnant can actually pass on the antibodies to their baby. And that can give the baby a degree of protection in their first few weeks of life, which is when they are most vulnerable.

Okay, now here’s the big one, especially for kids – is it true that when you go and get a vaccine, there will be some candy or at the very least a biscuit?

There used to be, didn’t there? Alas, in the politically correct world we live in now, you get a sticker. It seems a bit mean, but we don’t want to rot your teeth.

So I took myself up the road to the pharmacy, and got in line. The pharmacist there told me that I was actually already quite late in the season to get it – most people go in autumn rather than the dead of winter. But it definitely wasn’t too late, and she also confirmed that it was a particularly bad winter for the flu coming up.

The pharmacist described her technique as being a pusher, rather than a darter. She prefers to press slowly but firmly with the needle, rather than really stabbing it in. My apparently youthful arm skin was tighter, she said, which would mean she’d have to press harder to get through. How much was it going to hurt?

She moved in on the arm, seeming to wave the needle nearby, briefly grazing it with the tip. And then, she was taking her gloves off and dropping them in the wastebucket, along with the needle. What the hell just happened? I had barely felt it, let alone it being sore.

It turns out getting the flu shot is incredibly easy, and apart from a 20 minute wait afterwards to make sure you don’t have a reaction, convenient too. And it’s cheap – just $45 at standard rates, and free for certain groups. And it might literally save your life, or the life of people around you. So if you haven’t got it for this season yet, hurry up.

This content was brought to you by Green Cross Health. Some people think they’re immune from the flu if they exercise regularly or eat well. Unfortunately, the fact is everyone’s at risk no matter how fit or healthy they are. So to make sure you and the people are around you are protected, get your flu shot at any Unichem, life Pharmacy or The Doctors. And remember, if you’re pregnant or over the age of 65, you can get yours for free.