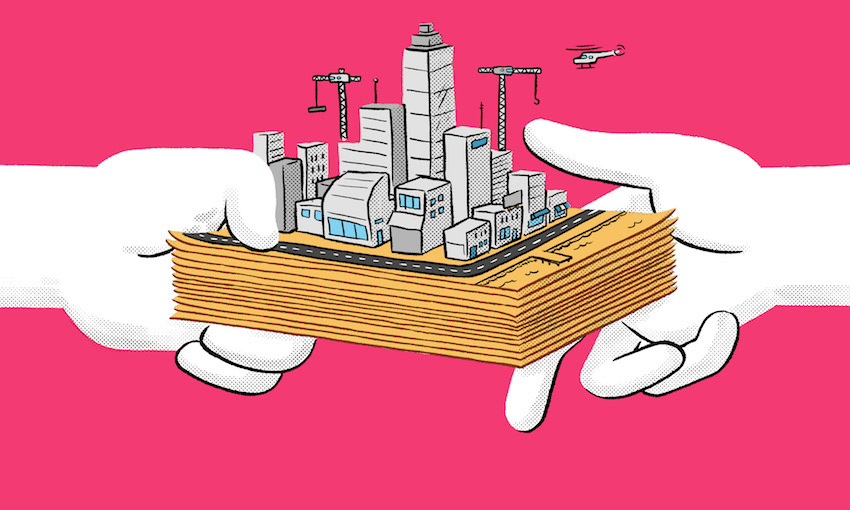 Whether New Zealand should introduce a capital gains tax is set to be almost as hot a topic in Labour’s first term as the prime minister’s pregnancy.

While debate rages around pinging housing market speculators on their profits, Kiwis overlook the fact a new tax would also capture the commercial property sector.

During their research supporting The Spinoff’s Tax Heroes project, Auckland University accounting professors Norman Wong and Jilnaught Wong made a surprising discovery. Because New Zealand does not have a capital gains tax, property and aged care companies pay tax at a much lower rate than other corporates.

A quarter of the publicly listed companies on the NZX 50 index are in the commercial property or retirement and aged care sector. This meant that when Wong and Wong examined the index to see if New Zealand corporates pay their fair share, the results were skewed – so the professors looked at what happened if they took this industry out.

Overall, between 2015 and 2017 the NZX 50 corporates paid an average cash tax rate of 22.7% – that is, the amount of money they pay to the tax man as a percentage of their pre-tax accounting income.

However, property and retirement/aged care operators paid just 6.4%. If this sector is excluded, the other companies paid an average 27.8%, close to the statutory tax rate of 28%.

Wong and Wong point out there’s no tax avoidance going on here, it’s just the way the rules work as the values of the properties the companies own rise over time, and those increases are recognised as pre-tax income. But because capital gains aren’t taxed this ‘income’ is exempt, in many cases even if the company sells the property and realises the gains. Thus their cash tax rate appears lower.

“It’s a legitimate thing, they haven’t done anything illegal,” Jilnaught Wong says. “If these changes were not recognised in (the companies’) pre-tax accounting income… their tax rates would be close to the corporate statutory tax rate.”

It raises the question whether this lack of a capital gains tax is distorting the market, and tax consultant Terry Baucher believes it is.

The Kiwi system is becoming “incredibly incoherent” around the question of taxing capital gains, he says. Some activities are taxed, others aren’t. The New Zealand Super Fund and investors in schemes such as KiwiSaver are taxed on their profits as they accrue, for example, but gains on property aren’t. “The issue then arises, is there an indirect bias towards investing in items which aren’t taxable… and is that great for the New Zealand economy?” Baucher says.

Dave Fraser, chief financial officer of NZX 50 commercial property company Argosy, says it is incorrect to suggest it’s not paying its dues. Argosy owns a large portfolio of industrial, office and retail sites, including the Citigroup Centre on Customs St in Auckland and New Zealand Post House on Waterloo Quay in Wellington. Wong and Wong’s research shows it paid a cash tax rate of 10.3% last year, 14.2% in 2016 and 17.6% in 2015.

But that doesn’t tell the full story, Fraser says. In any property company’s profit and loss (P&L) statement there are massive swings in the value of its assets, but they don’t translate to actual cash because it still owns them, he says. “Nowhere in the world do you pay capital gains tax on the unrealised valuation of property,” he says.

In addition property firms take out interest rate swaps, financial instruments that allow them to fix their interest rates. These also vary enormously in value, but again the firm does not pay tax on the gains or claim deductions for the losses. “We end up paying 18 to 22% on our taxable income,” Fraser says.

And property companies do pay tax on their gains in many instances, he says. If they subdivide a site, as Argosy recently did in Palmerston North, the profits are taxable. Also, if it sells a property for a greater price than it depreciated it (under the old rules which allowed owners to claim for that) it has to pay it back.

Generally speaking the commercial property sector is not about buying and selling to make a quick buck, Fraser says. “We’re in the business of holding assets and retaining the rent for distribution to our shareholders.” Even so he estimates Argosy has paid tax on around 15 property sales in the last five years, as it divested sites that were no longer core to its business, he says.

But Jilnaught Wong says to claim property companies are not interested in capital gains does not paint quite the full picture either. The performance of a property company CEO will be measured on both the business’ rental income and its capital gains, “because if you don’t take into account the capital gain it’s an irrational investment to be in”, he says.

Having said that, Wong questions why property firms should be singled out for capital gains tax. He gives the example of another type of business which buys a piece of plant for $1m. It depreciates the value of that equipment to $700,000 and takes the tax deduction, but then it ends up selling the plant for $1.2m. It has to pay back the deduction on the $300,000 depreciation, but it does not pay tax on the $200,000 capital gain.