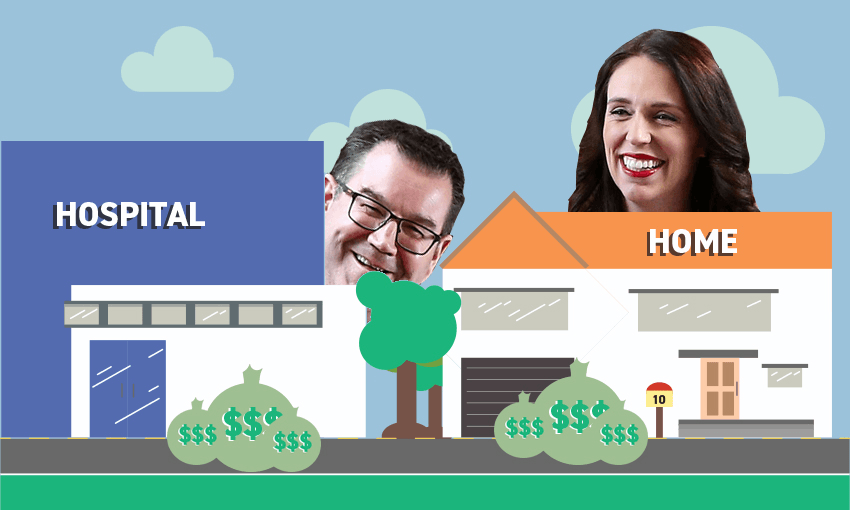 Grant Robertson and the blame-it-on-the-last-bunch budget

They’ve left wiggle room for some rainy day expenses, but the Labour-led government more than anything has sought to sell today’s funding announcements as an exercise in cleaning up National’s mess. Rebecca Stevenson reports from Wellington

Grant Robertson hammered a few key messages in his budget address today: this is a budget that will lay the “foundation for the future” by rebalancing government spending towards children and families, but it is also very much a “stuff you, National, we have to fix busted up public services” budget.

Overall the government is forecasting a surplus (that’s money in the bank rather money we will be in debt) of $3.7 billion in the 2018/19 financial year. Economic growth should average about 3% a year over the next five years and unemployment is expected to stay low (maybe even hitting a ten-year-low) at about 4.1%.

So what does this budget have for us, Joe/Joeli/Janelle Blogs? Robertson says he’s spent a bit more than he wanted to, in this, his first of three planned budgets. New operational expenditure (money to run stuff, like hospitals and benefits and the like) totals $3.2bn – but it’s also saving bits and pieces where it can, which is estimated add up to about $430m. New capital expenditure (for infrastructure) is estimated at $3.8bn.

Robertson didn’t literally say “stuff you National”, but he may as well have. “Our public services have been underfunded for too long and there has been a failure to appropriately plan for the future,” said the finance minister. “That changes today.”

Health got a serious chunk of change, with operating funding (that’s money to run stuff) of $3.2bn and $850m capital funding (for infrastructure like leaky hospital buildings) with $750m of that capital expenditure going towards, yes, hospital building issues.

For the young ‘uns school-based health services (nurses in decile 1-3 schools) will be extended to decile 4 schools, and is expected to cost about $4.2m across next four years. Free doctor visits are to be extended to under 14 year olds (about 56,000 teens are expected to benefit).

Low GP fees (up to $30 off GP visits for people with a Community Services Card) will also be extended to more than 540,000 Kiwis at a cost of about $365m over four years. Minister of Health David Clark: “Last year more than half a million New Zealanders didn’t go to their GP because of the cost. In a country like ours, that’s a disgrace.”

Housing: The elephant in the economy

KiwiBuild is old news now, but the government has pledged to boost public housing stock (state houses) by an estimated 6,400 homes over the next four years. It has allocated more than $634m for operating funds for housing, with new spending including $7m for “frontline housing resources” this year, with $30m allocated towards this over four years.

The Housing First programme (targeting the long-term homeless) will expand into new communities, with planned spending of $4m rising to $18m by the fourth year, for a total spend of $43m over four years. The programme itself is expected to cost $20m over four years to run.

There is an extra $15m increased funding for the Māori Housing Network, Papakāinga housing for Māori and there is $142m over four years for the Healthy Homes insulation and heating programme for eligible owner/occupiers.

We’ve all seen and heard our schools are under pressure. Will this budget help? There’s a school growth package of $395m over four years to build new schools and classrooms and a further $63m operating spending.

Overall education spending sits at $1.6bn for operational spend and $334m for capital expenditure, with money for 1500 new school teachers and a serious boost to early childhood education, $590m over four years.

There’s an impressive lift in funding for learning support; $284m over four years and Robertson was rightfully trumpeting this spending. This spending, Robertson expects, should take pressure off school budgets overall. Teacher aides feature in the budget; with cash for raising rates starting at $5.7m in the first year and rising to $23m by year four.

Not much to cheer about in the projections here. It’s expected that wages will stay pretty flat with a 3% growth estimated over the next three years and more than 200,000 new jobs created.

It’s often suspected that low-wage working immigrant workers are dragging down wages, and there’s additional funding in the budget for more labour inspectors, $8.8m over four years. We also have to take into account the already announced rise in the minimum wage and increased paid parental leave.

They put it like this: “Increasing our Aid to Tackle the Biggest Global And Regional Challenges of our Time” – that’s our offshore aid, is set to increase $122m then rise up to about $230m a year spend by 2021.

There was new some money for biosecurity; $2.3m a year, $3.7m for a sustainable farming fund and a biodiversity fund rising to $31m by the fourth year of the budget.

A clothing allowance (currently only kids in care) will be extended to kids out of care, costing $23m a year rising to almost $30m per year, or $105m over four years.

Sometimes when things are slashed you wonder how they got funding in the first place. But it does seem a bummer that there’s no more money in the kitty for the National Aeronautics and Space administration teacher ambassador programme – $300,000.

The government is stopping our contribution to the Kea network – $175,000.

KidsCan and KickStart charities will get no more money after this year.

And we also have to pay for the Canterbury earthquake mess; Canterbury Earthquakes Insurance Tribunal $6.5m, and an inquiry into EQC $2.4m.

Not everyone will thrill at the $100m for sailing and the America’s Cup, while the Commerce Commission gets a little lift in funding of $1m. They do have plenty on their plate.

What did Winnie’s crew get?

There was something for the Supergoldies, $1m to develop a free annual health check and it wouldn’t be a Peters budget without a dollop for racing; the industry is allowed to claim tax deductions for the cost of livestock acquired to breed (estimated cost $150k 2019/20 or $4.8m over four years).