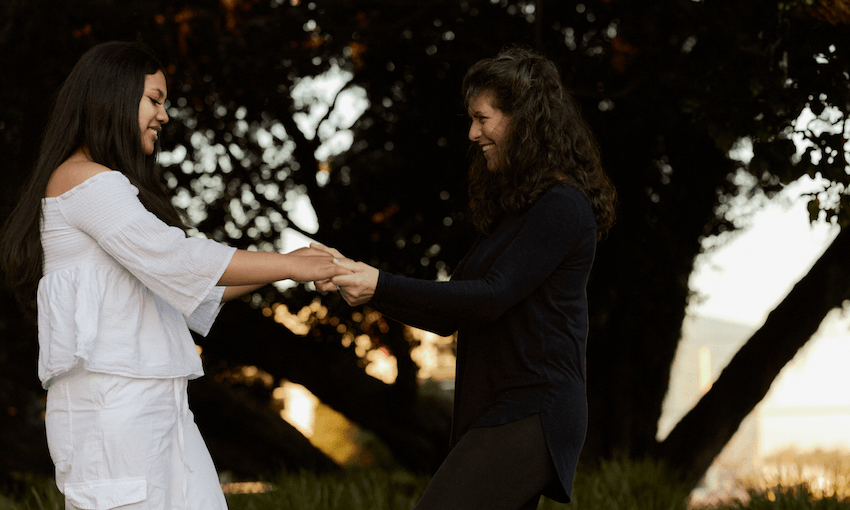 By Fiona Ralph
Guest Writer
Made possible by

Pillars, PARS and First Foundation all do crucial work in the fight against child poverty in New Zealand. Here, three people who have been touched by these charities discuss how their lives, and the lives of the rangatahi around them, have changed since.

When Pamela* found out her daughter had gone to prison last November, she didn’t know where to turn. Her daughter’s three children had been left without parents to look after them, and the whānau were struggling with the emotional load.

Pamela took in her three grandchildren, but on top of the heartbreak was struggling with the added pressure, and was concerned the kids were having a hard time with the changes. “My heart was breaking. Their hearts were breaking,” explains the 56-year-old. She wanted to be able to provide them with all the extras, sports games and a good Christmas, but her money and time was already stretched thin.

It wasn’t until she approached the charity Pillars, and was immediately offered support, that Pamela, as well as her daughter and grandchildren, started to feel less alone. “I said ‘I don’t know if you can help… How do you mend a broken heart?’ Because that’s really what I wanted,” Pamela says.

She didn’t realise at the time that the support she and her whānau would receive from Pillars would be so impactful. Knowing there was a support system there for her to lean on was crucial during that time.

With one of the children’s birthdays just a few days after Pamela’s daughter went to prison, and Christmas a month later, gifts and food parcels given by Pillars helped to brighten a difficult time. The charity also gave advice to the family on how to navigate the prison system so they could arrange visits.

“They gave guidance, they gave reassurance, they spoilt the children. And the children really appreciated it, because by Christmas time, both parents were in jail.”

While the children’s father is now out of jail, their mother was sentenced to just over three years – a long time to adjust to life without mum. While Pamela is able to attend to and provide for all the kids’ daily needs, she isn’t left with much time for just hanging out. That’s where Pillars’ mentoring service comes in. Each child is matched with a mentor who shares one-on-one time with them; cooking, rock climbing and playing sport.

“It gives me a little bit of time out, and something for them to look forward to,” says Pamela.

Pillars’ aim is to create positive futures for the children and whānau of prisoners, helping to break the cycle of intergenerational offending. The organisation is one of the charity partners of Share My Super, an innovative new charity offering easy ways for over-65s to donate some – or all – of their superannuation to causes to stop child poverty. By spreading financial support across a range of partners Share My Super is designed to help make a deeper systemic impact on poverty.

“When we talk of poverty, we don’t talk about money,” says Tui Ah Loo (Ngāti Porou, Tūhoe), CEO of PARS, another charity partner of Share My Super, and an advisor to Share My Super. “We talk about addressing poverty of the mind, of the spirit, of the body and the whānau. But when people think of poverty, they think about food, clothing, shelter. Poverty is more than that to us.”

PARS (People At Risk Solutions), supports people in the prison system and those entering or exiting prison, including youth and 501 deportees from Australia, and their whānau. They help people coming out of prison to open bank accounts, apply for benefits, find work and housing and reconnect with whānau.

“We provide services to what I would call the most vulnerable members of our society. We’re very much about illuminating the silent sentence that our people face. [We’re] trying to address the stigma, the judgements, the bias that our people face on reentering society,” says Ah Loo.

The funding PARS receives from Share My Super is applied to the Te Ohomai Rangatahi service, which is targeted at “awakening the potential” of youth and putting young people on a positive trajectory.

“It was set up to stop one more generation of youth entering the pipeline of disadvantage,” says Ah Loo. “It is really about preventing our rangatahi from entering the justice system, or when they are in it, to get out and stay out.”

In the 2020/21 financial year, 81% of the rangatahi referred to PARS were supported to get out of prison. That support is “priceless”, as it starts to push back against the systemic issues that create disadvantage, says Ah Loo.

“You can’t put a value on that because that’s about stopping one generation at a time. Through this service that we’ve developed for our rangatahi, we are looking at addressing root causes that have impacted on our young people ending up in the system.”

Share My Super specialises in effecting change at this systemic level. By offering donors the choice of contributing to a single charity or multiple charities – each focused on ending the cycle of child poverty – donors can make a measurable difference to the lives of young people. While the service is primarily aimed at over-65s, anyone can donate, and donations can be recurring or one-off, with 100% of donations going towards your chosen charity or charities.

Michael Moka (Te Rarawa, Ngāti Hine, Ngāpuhi and Mangaia of Cook Islands), is a bright example of the intergenerational change that can occur when young people are given a hand up. The 33-year-old founded Indigenous Growth – a company that helps organisations to create environments where Indigenous people can thrive – after receiving a university scholarship from First Foundation. The charity, which partners with Share My Super, helps talented youth from lower-income backgrounds attend university.

Moka left home at 15 along with girlfriend Toria – now his wife and colleague at Indigenous Growth. He came from a troubled background and his youth was surrounded by drugs and gangs.

“We would get evicted every six or seven months, and there was a bit of violence… so when I was about 15, I was over it,” he says.

The couple put themselves through their last few years of school while working multiple jobs, living out of their car and in friends’ garages. “We just did whatever we could, so we could put ourselves through school.” Not only did the couple finish school, but they both became prefects – Moka even became head boy.

Receiving a First Foundation scholarship enabled him to go to university, introduced him to a mentor and gave him a job with ASB, his scholarship’s partnering organisation.

Moka excelled at the University of Auckland, becoming involved in Ngā Tauira Māori, the Māori Students’ Association, and what is now known as the Commerce Association Pacific and Māori. He went on to work at the Department of Executive Development at the university’s Business School, where he noticed a gap in the numbers of Māori and Pacific people attending tertiary study.

At 25, he founded his own company to help Indigenous people excel as leaders. He is now proud to be the first First Foundation alumni to be giving back to the organisation, sponsoring a student’s university fees and providing a job as a partnering organisation alongside funding from Share My Super.

He says he wouldn’t have been able to launch his company without his First Foundation mentor. “He showed me what was possible… My dream was just to put food on the table, a roof over our head. And that’s the most limiting dream ever, if that’s your ceiling.”

Moka is happy he can bring his one-year-old son up without those limiting beliefs. He believes charities like First Foundation and Share My Super are key in helping to break the intergenerational cycle of poverty. “I think that’s the real goal. If you can help one person break the cycle of their family, you’ve helped generations after.”

Seeing people contribute to Share My Super who haven’t necessarily experienced child poverty means a lot to Moka. “There’s not a lot of people that have the finances to actually give… and that’s why I try to tell my story… because if other people haven’t experienced it, how are we supposed to get those people to come in and take a punt on someone like me?”

The support Pamela has received from Share My Super has also inspired her to give back to the charity when she reaches retirement. It’s through the kindness of strangers that she and her family have been able to survive and thrive through their struggles and she wants to return that favour.

“[The donors] have restored my faith in mankind and also inspired me, by their example, that’s what I will do too, when I’m able.”