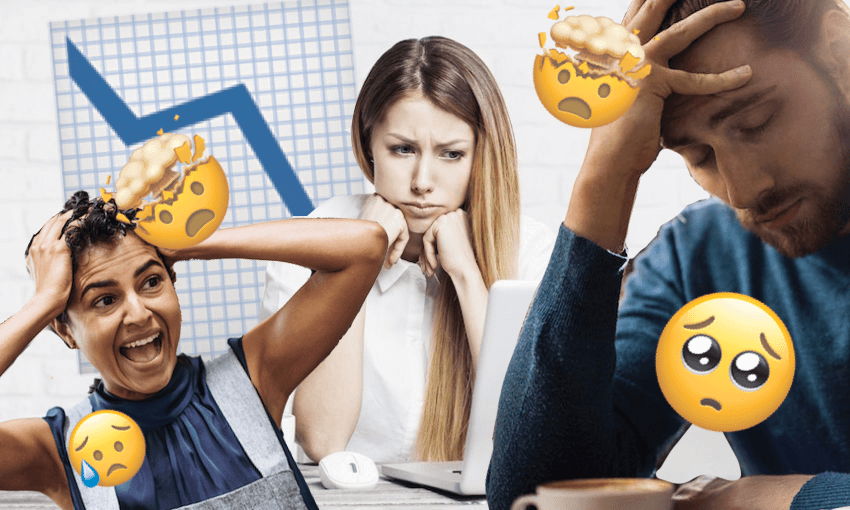 Pictured: a bunch of people who wish we wrote this helpful article two weeks ago.

Life, hacked: 15 ways to get your productivity on track for 2020

Pictured: a bunch of people who wish we wrote this helpful article two weeks ago.

Now that the new year is well and truly underway, how can you make the most of your time and feel good about it? Sam Brooks has you covered.

Nothing feels better than ticking off a list, and nothing motivates you to finish off a list quite like starting it – it’s that quick rush of feeling good that makes you want to feel even better. So while you’re putting things on your list like ‘go to work’ and ‘be a better person’, why not put something achievable on there that is also good for you? Like ‘have breakfast’. Or if you’re feeling especially ambitious ‘have a healthy breakfast’. Then do it, cross it off, and feel the good things. Then do the rest of them!

You’re at a desk. You have a charger. There’s no reason for your phone to be within cable’s reach of a charger and not be attached to it. It’s a scientific fact that we all feel better when our phone is at least 86% charged.

Everything can be one step down – especially in the same office

By which I mean: Every meeting can be an email, and every email can be a Slack message. Using Slack for your intra-office communications – and reducing as many of your internal meetings as possible to Slack convos – can help to clear up your calendar in no time. Rather than blocking out a half hour window to ask three questions, open up that person’s conversation window and type in three questions. Do other work until they reply. Drop a few custom emoji reactions. Everybody feels just a bit happier, right?

Purge the stuff you don’t need

We’re in a new decade now and it’s time for you to grow the hell up and Marie Kondo that life of yours. That might mean taking more dramatic steps like slowly ignoring a particularly irritating mate, through to more manageable measures like finally deleting Snapchat or taking yourself out of Slack channels that are no longer as helpful at work. Getting sick of your needy cat? Take yourself out of the #catlovers Slack channel.

Go to sleep an hour earlier

We all need more sleep. We all need that extra hour of sleep. Do you really need to watch that episode of 30 Rock again? No! Just go to sleep. You’ll respect yourself more in the morning. You might even respect other people more because you’ve slept!

Put some art up on your desk

Be a magpie! We feel better when we look at something nice. So put something pretty up on your desk (or even have a tab with a nice picture open) so if you’re feeling a bit bored or down, you can look at something. For example, here’s a picture of Merrit Weaver at the Golden Globes which is a total mood for me at the moment. I feel better just thinking about it!

If it takes less than two minutes to do, just do it.

This is related to the above. Whether it’s an email (but remember, every internal email can be a Slack!) or paying that bill, it’ll make you feel so much better if you just do that tiny little task you’ve been putting off for weeks. You know that thing that you forget until you’re just about to nod off to sleep and go “Oh shit!”? Do that. Do it now.

Look, sometimes we all need a nudge. Not everybody is blessed enough to be reading a list of productivity hacks. If you need something done, flick them an @, whether it’s an email, a Slack, or some other form of communication. Do not physically nudge your co-worker. Nobody wants to be nudged.

The formula to a productivity playlist is simple. When it’s one kind of music, you work. When it’s another kind of music, you relax! Mix up your Succession score with some Lizzo. Maybe some Philip Glass with some Nicki Minaj. Bach with ‘Baby Got Back’? The limits are just your musical taste, and the tolerance of your co-workers hearing that taste leaking from your headphones..

(I actually can’t claim credit for this one, it’s a modification of the Pomodoro technique, invented by Francesco Cirillo in the ’80s. Basically, you set a timer for 25 minutes and work like hell, then have a short break. Rinse and repeat until your task is done. I just put mine to music.)

How much time do you waste every day writing polite, mostly meaningless email responses? A lot! If you’re a Slack user, opt for emojis instead and save at least SECONDS every time. Just received a compliment? Drop a smiley, drop a love heart, drop an inside-joke hand signal! Coworker says something so funny that you (almost) had to have a real-life, facial reaction? Cry-laughing! Maybe even add a skull face! You’re dead from laughing! You can even create custom emojis, perfect for when the unicode library can’t quite convey that feeling when your desk-mate announces that they’re running exactly 23 minutes late for the 16th straight day.

Get off social media

Your hilarious tweet can wait until work has finished. Everybody knows the times when tweets really go viral is during commute times anyway (7:00-8:50 and 5:10-7:00, memorise it.)

Flight mode is your friend

Especially if, like me, you don’t remember to turn it off! Sorry, emergency calls, I’ve got emails to answer. If that feels a bit severe, maybe just try Do Not Disturb mode – if you’re using Slack, it’s an extremely easy way to not only avoid concentration-breaking pings, but to quietly communicate to your coworkers that you’re in the Work Zone and should not be interrupted.

Go for a walk

Seriously. Take ten minutes. Go for a walk – change your scenery, get some fresh air, think about something that’s not work. When you come back to your desk or wherever it is you choose to work, you’ll be a bit fresher and more inclined to take on whatever it is.

(If your job involves walking, do the reverse. Sit down for ten minutes, have some static scenery, get some non-fresh air, so on and so forth.)

If you’re too shy to do it in person, do it via Slack. Bonus: You can have Slack on your phone so if you’re down the well, you can @channel and notify all your co-workers that you’re stuck in a well. Now that’s productivity.

This piece was produced in paid partnership with Slack, a workplace collaboration platform that’s designed to make your life a little easier and a lot more productive. To learn more or to try it out, click here.