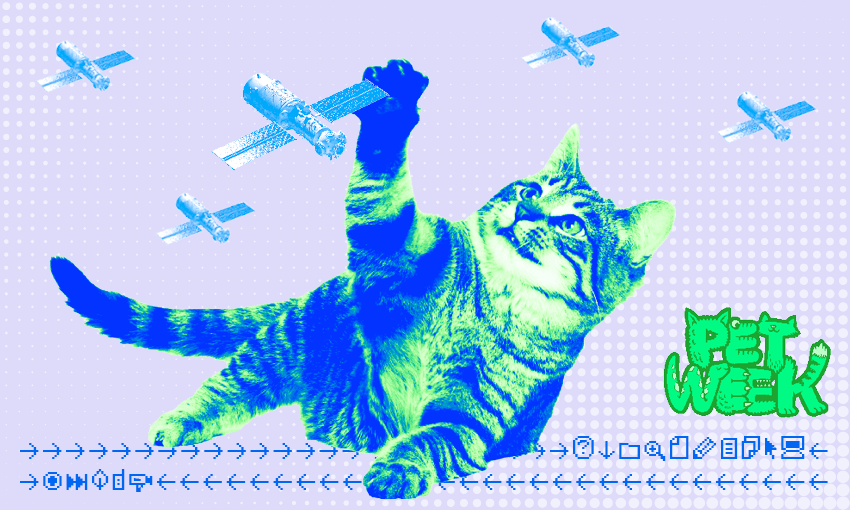 I tried to track my cat’s movements with GPS. It didn’t go well

Pet tech is on the rise, meaning you can use a GoPro or GPS tracker to keep an eye on your fluffy friend’s secret movements. In theory, anyway. For IRL, Dylan Reeve realises it’s harder than it looks.

Moriarty is seven now, but has displayed a fiercely independent streak since he was very young. He comes and goes as he pleases and refuses to abide by any rules.

He certainly isn’t a lap cat.

Every time I get up from the lounge to quiet his incessant meowing by opening the back door – despite there being a cat door he is entirely capable of using – I ask the same question: “Where the hell have you been?”

During daylight hours, Moriarty can almost always be found asleep somewhere in the house. His preferred spot changes, but 90% of the day he’s somewhere inside. At night, well, that’s a different story. As the household is winding down for the evening, he’s getting ready to head out.

I have never had the remotest idea where he goes. I can’t ever find him outside, and I’ve never seen him away from our house. It’s a mystery. So when The Spinoff called for Pet Week stories, I knew immediately what to pitch: let me track my cat!

I did not consult Moriarty about this.

When Eric from Petrek – a specialist sub-brand from New Zealand GPS-tracking company Lintek – dropped off the Petrek 3G tracking device, I knew immediately that it was going to be a challenge. The unit isn’t big, exactly, but it’s also not small. The tracking unit is about 5cm by 4cm, and about 2cm deep; a little bigger than a pack of TicTacs. And it weighs about 30 grams — not heavy, but also not light for a cat.

Moriarty was certainly going to have some thoughts.

The technology involved is pretty straightforward: the small device contains a GPS receiver and a small cellular transmitter. It periodically calculates current GPS coordinates, then uses the cellphone network to transmit the details to a server where you can see the most recent position data using a mobile app. It’s like Find Your Friends, but for your cat. (Or dog, or maybe rabbit?)

As I suspected, Moriarty was not on board with my plan to track him. My fault, I hadn’t briefed him. He also hadn’t worn a collar for a couple of years, and was apparently pretty fond of that sweet free-neck feeling.

After what we could call some “heated discussion”, I had scratched hands and Moriarty was wearing a collar. He then burrowed under a couch where he spent a while trying to remove this impediment to his liberties.

It wasn’t the Petrek 3G’s fault. Eric had warned me that it was best to slowly acclimatise the pet to having a larger item on their collar, but I thought my cat was different. I thought he was special. I thought he’d understand my need for his co-operation – for journalism.

My teenage children on the other hand, they understood what I needed. And they could be bribed. So I formed a new plan, and went to make peace with Moriarty by removing the cursed collar. He appreciated my assistance (read: scratched me more) and disappeared outside – I have no idea where, exactly because of, you know, the whole lack of tracking thing.

With a bar of chocolate on offer, the teenagers were willing to be my cat proxies for testing. I tucked the small tracking unit into a school bag the next day, and watched from the comfort of my desk as I received an update every few minutes of the child’s movements.

The device did exactly as it promised: told me where my cat (child) was. The technology is great; the problem was the pet. Or, if I’m being honest, the owner.

The tracking app, available for iOS and Android, is well-designed and intuitive. It will show your pet’s location on a familiar Google map, along with guidance about the accuracy of a given location reading. It also stores a daily history of all movements, ready to be reviewed at will, and provide the option of creating a “geofence” which will alert you if your pet travels outside the defined area.

But why would anyone need to track their pet anyway? Well, “need” is a strong word – if there’s one thing we should know about technology now, it’s often not about need. You don’t need to be able to turn lights off with your voice, but many of us can. That said, Eric related the story of a stolen dog recently located with the aid of his tracking collar. And obviously there’s us curious cat owners, who just want to know exactly what Fluffybum is up to around the neighbourhood – does he spend all day being doted on by the Joneses over the back fence?

There are some specific use cases, too. “A lot of customers want to track their pet when moving to a new house,” Eric explained. “They get the tracker a little while before moving house, and then use it at the new address in case their pet tries to head back to the old house, or just gets lost in a new area.”

As with all technology, there are compromises and limitations. The Petrek 3G is reliant on both GPS and cellular networks to provide location information, meaning it doesn’t work as well when it’s indoors or in otherwise heavily obstructed areas as it struggles to receive GPS signals. If your pet happens to wander into a cellular dead zone, it will not be able to communicate the location back to you.

As with every gadget we rely on, battery life can be a challenge at times. Depending on update frequency, and variables like signal strength, the battery might need charging as often as every day. Eric’s tip: once you’ve used the tracker for a while to get a good sense of your pet’s territory, you can reduce the update frequency in order to prolong battery life. If you urgently need to know the pet’s location, you can change the settings in the app to get more frequent updates.

With the technology in hand, I’m confident I can finally know where my cat goes when not lounging at home. I just need to take the time now to convince my cat to participate in my experiment; a process I’m told could take a couple of weeks.

As has happened so often before, my attempt to solve a problem by throwing technology at it was foiled by factors that have nothing to do with technology.

But I will persist, and eventually I will know where Moirarty lurks in the dark shadows.

Pet Week is proudly presented by our friends at Animates. For more Pet Week content keep an eye on The Spinoff and watch The Project, 7pm weeknights on Three.