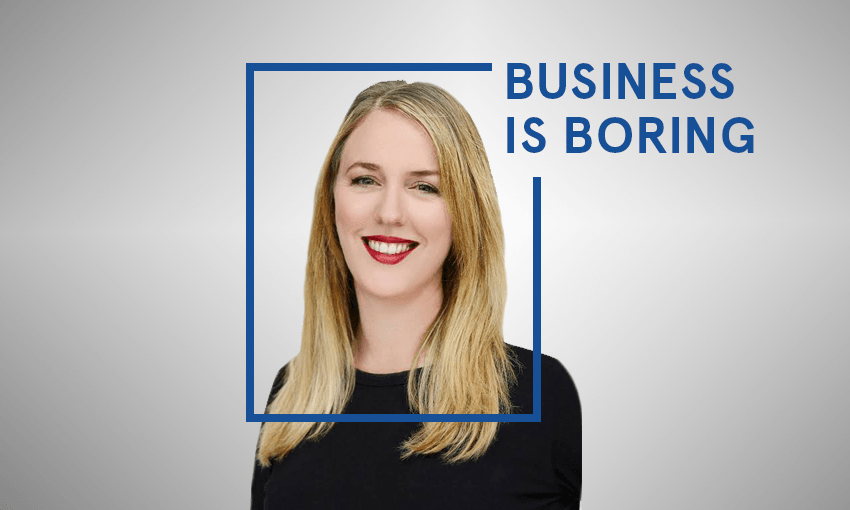 A lawyer, writer and mother on why mothers are as ambitious as anyone

Business is Boring is a weekly podcast series presented by The Spinoff in association with Vodafone Xone. Host Simon Pound speaks with innovators and commentators focused on the future of New Zealand, with the interview available as both audio and a transcribed excerpt. This week he talks to Genevieve O’Halloran, a lawyer and mother who knows a bit about balancing family and work.

One of the themes of this podcast has been how can we actually make space in business and leadership to change some absolutely bananas statistics. Stats like these: only one of our top listed NZX50 companies led by a woman, a gender pay gap at about 10%, and a dearth of non-male directors.

One of the reasons often given for these stats is the traditional role of women as the primary caregiver to children, and the one who steps out of the workforce for parental leave.

And so it was great to see a woman with a big job announce the other week that she was going to have a kid, and that her partner was going to be the primary caregiver and stay-at-home parent. Prime minister Jacinda Ardern and partner Clarke Gayford have elevated a conversation and the pressures that face so many women with fast moving careers and ambitions to contribute in work and public life.

In response to the news, one woman with experience of multi-tasking a career, public expectations and being a parent penned a great column you can find on Noted.co.nz. Genevieve O’Halloran, a lawyer who has worked with companies like Vodafone, Bauer Media and now Lion across all elements of law – privacy, public interest, commercial acquisitions, media law – and excelled and raced up some of our biggest corporate ladders, in this column laid out some of the difficulties and practical ways that room can be made for women to continue to contribute, in an age when, even if it shouldn’t be expected that the female will be primary caregiver it so often is.

Genevieve is external relations manager for Lion NZ, a company that is further along than most on the journey. Last year they were champion winner of the YWCA Equal Pay Awards, and of the DiversityWorks Work/Life Balance Award. To chat about that column, her career, and how you can have it all so long as that all includes flexible work and some effort to address deep paternalistic bias, Genevieve joins us now.

What pressures and considerations did you have to have when you decided ‘I want to have a family’ and maintain a job like this where you were involved and active and in things?

I always assumed I would continue working after I had children, that was always a given for me. I don’t think I at all anticipated how difficult it might be to balance the two, and I only have one child, so I’m speaking from a position of relative privilege here in terms of women who have more children than I do. I always thought I’d have kids at some point as well, but I wasn’t necessarily the kind of person to stay at home with them 24/7. So I just had to play it by ear, really. I didn’t realise how hard it would be, and how much you do need flexibility to continue to have a career that’s at all sort of challenging or fulfilling for me.

You actually did try to change up your working environment to take up a part time role because you thought that would make it easier, but that wasn’t the experience?

No, it wasn’t. And the company I then joined was a great company, great people. I have no complaint about the organisation, it just wasn’t the right role for me. It was a 24 hour week job. They were very flexible as well but I did feel that the subject matter and the experience level was a bit of a step back, and I had known that going in, but I realised about six months in that it wasn’t for me and I needed a more challenging job, but I also needed it to be flexible, not necessarily part-time. Somehow I had to stitch all that together and find the perfect role.

What does a flexible workplace actually look like? It’s one of those terms that’s bandied around and sometimes it means ‘we have a coffee machine and a ping-pong table’ but what does it mean when it’s actually working?

Well one thing I realised in this day and age is that every workplace is flexible or expects flexibility but it often only cuts one way, as in the employer expects you to be picking up calls whenever, when you’re on leave and answering emails on the weekend, that’s kind of a given when you’ve got an iPhone that’s surgically attached to your hand, as mine is. However it doesn’t often cut the other way, or it doesn’t as often, in terms of the employer allowing the employee to do the work based on outcomes and it doesn’t necessarily matter if you’re in the office, when you’re in the office, how you structure that.

The company I work for, Lion, officially introduced its flexibility policy shortly after I started in early 2016 and it tried to address this through a number of different things, and the key tenet I think is the phrase ‘start with yes’, which is that flexibility can always be accommodated and you figure it out with your manager from there, as opposed to ’this is how we work, 8:30 till 5:30, and [feel free to] ask for flexibility but we’re not sure we can do it. So flipping that on its head suddenly made it a) a lot easier to ask, and b) a lot harder for managers who weren’t in that head space to say no, because the expectation from the top of the tree was ‘we can make flexibility work’.