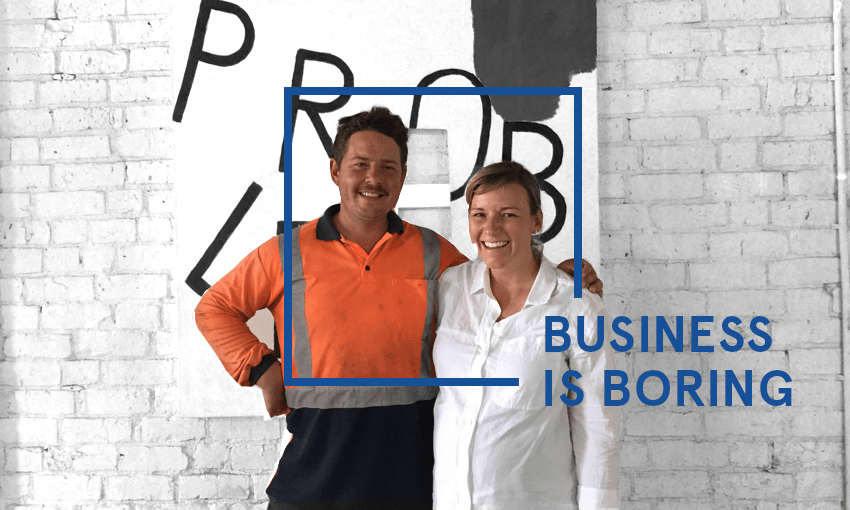 We Compost is keeping tons of waste out of landfills

Business is Boring is a weekly podcast series presented by The Spinoff in association with Vodafone Xone. Host Simon Pound speaks with innovators and commentators focused on the future of New Zealand, with the interview available as both audio and a transcribed excerpt. This week he talks to Steve Rickerby and Gemma Spring, owners of a composting service that’s helping businesses become greener.

New Zealand likes to think it’s clean, green and 100% pure, but if you look under the lid, quite a few things you would expect from such a place are not really all there.

Like recycling. Even today there is a long way to go, but we are light years on from where we were nine years ago when Steve Rickerby spotted a massive hole in the market for a company that could pick up food waste from businesses.

Back in 2009, Steve was working at an insurance company that had moved into Auckland’s first 5 star green rated building. As part of the rating system, staff were separating waste into rubbish, recycling and compost, but none of the large waste companies offered a service to collect the food waste. So the carefully separated waste was just going to landfill.

Steve saw a big problem to solve and launched We Compost collections with one bin on the back of his ute.

They now collect over 30,000 kilograms of organic waste each week, servicing corporate offices, food courts, schools, tertiary institutions, hotels, cafes, caterers, and coffee roasters such as Kōkako Organic coffee roasters who recently switched from plastic coffee dump bags to compostable ones, helping to lead the way and drive change in the coffee industry..

To chat about where they are, where we all are, and what’s next, Steve and Gemma joined the podcast.

About the gap in the market: Were there no other ways to get compostable stuff collected at a large scale business? What are all these office buildings doing?

Steve: That’s the interesting thing and back then there was always the opportunity to compost it yourself, even back then there were large-scale worm farms, these things called tat-g’s, these huge one and a half cubic metre worm farms and onsite composting bins and all sorts of options to be able to do it yourself, but there was nothing else outside of that, no collection infrastructure, so the larger waste companies had just put it in the too-hard basket and so there was no incentive to collect it because they were making money off sending it to landfills, they own the landfills, and they’re collecting the rubbish, so for them there just wasn’t a market or they didn’t see that people would want to do it.

And how did you go about starting to get customers? Was it a matter of calling everyone who was claiming to be ‘eco’ and saying we ‘walk the talk’?

S: That’s the thing: you can’t really do that. And I remember some of the initial conversations people would just say ‘well, I don’t have any organic waste’ and you’re like well, I know you do, it’s just you’re not sorting it so you can’t see it and you don’t know that it exists. That was kind of the problem in the early days – people didn’t identify it as an independent waste stream, they just saw it as being rubbish. I had this wonderful idea and this vision of what it could be but I really didn’t know what the next step was, and so I started advertising on my brother’s landscaping website – he was running a landscaping business – for compost collection.

Eventually, after a few months, I got a phone call out of the blue from this guy Glen at eightthirty coffee on K Road just saying ‘hey, I’m roasting coffee and I’ve got these coffee grounds, just wondering if you guys collect it?’ and I said yup, that’s exactly what we do. I didn’t tell him we didn’t have any customers, just said ‘when do you want a bin?’ Then I set about trying to find a supplier of bins and bought him a bin and delivered it down there and that’s how I started so I had one customer for probably the first few months. I’d pick his bin up once a week and take it down to Kelmarna community gardens in Herne Bay and pop it in the compost or use it as mulch around the fruit trees.

What do you have to learn along the way to do something like that? I imagine going from a bin on the back of your ute you’d have to up your infrastructure at some point?

S: Absolutely. And that’s the thing along the way. There are periods where things plateau and you think, oh, this is pretty easy. I remember when I got to the point it was just me picking up bins twice a week with just a ute and a trailer, and I thought this is pretty good, it was quite comfortable, I had this sort of routine going and I thought this is good, this is fine.

G: That’s when we met actually. You were living a cruisy life.

S: Exactly, and I suppose that’s a good point: Gemma and I met and then it wasn’t planned as such, but within the first month we found out that Gemma was pregnant so… we were faced with some really tough decisions. At the time I think we had 700 dollars per month revenue, Gemma was studying at uni full time and working part time as a cleaner and in a cafe and we were kind of like, well, what are we going to do? You know? We had to make some calls and we just decided we were going to plough ahead with everything. I could see We Compost has potential so we just had to do it. We made the call that we were going to grow the business.

G: And on my student allowance and part-time wage I was going to fund our living.