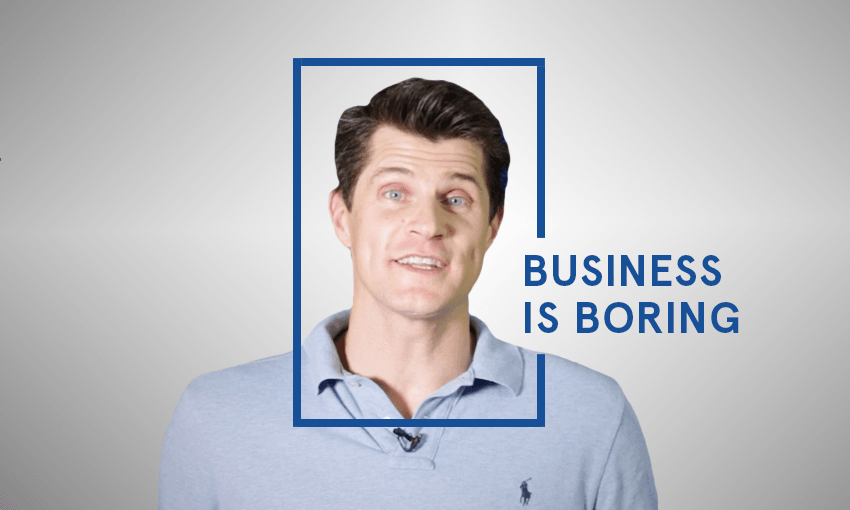 Business is Boring is a weekly podcast series presented by The Spinoff in association with Vodafone Xone. Host Simon Pound speaks with innovators and commentators focused on the future of New Zealand, with the interview available as both audio and a transcribed excerpt. This week Simon talks to Dr. Sam Hazeldine about how one drunken injury inspired a change.

We’re very excited to introduce today’s guest, someone extra inspiring, even by the pretty amazing standards of the people we talk to week in week out on this show. Someone, I kid you not, that Tony Robbins looks to for motivation and inspiration.

He’s an author, entrepreneur, doctor, extreme skiing champ, former drunken backflipper and current dedicated father and inspirational business leader. He even got the modern version of the Hippocratic oath changed (!).

Let’s rewind to the end of uni study, when a drunken stunt of a back flip led to Dr Sam Hazeldine, then in his last year of medical school with a promising extreme skiing career on the cards, waking up from a coma with a poor outlook for future success at both. What could have been the worst day of his life he made one of his best, resolving to focus on what matters, then going on to out-perform the best hopes for his head injury: within a year he was a grad doctor and skiing national champion.

Sam is the founder and managing director of three companies that shook up medical orthodoxy by keeping the welfare of doctors at their heart: MedRecruit, MedWorld and MedCapital. They have been wildly successful.

He’s been on the Fast 50 list multiple times. He was the Ernst & Young Young Entrepreneur of the Year 2012 and the 2014 recipient of the Sir Peter Blake Leadership Award.

And recently he lobbied the World Medical Association to include the health and wellbeing of the doctor in the Declaration of Geneva, the modern-day Hippocratic Oath.

He wants to help everyone live exceptional lives, from you listening right through to the scores of orphans his foundation has helped rescue from life as child soldiers in South Sudan. Dr Sam Hazeldine joined us on a hot and muggy Friday afternoon recently for this chat.

Tell me little bit about the guiding insight to MedRecruit, your first big successful move as an entrepreneur.

I truly believe you have to spend your life doing what you love. You’ve got to be passionate about what you’re doing, and I wasn’t passionate about medicine. I didn’t mind it, I didn’t hate it and I was okay at it but I wasn’t juiced about it or passionate about it and what I saw was that after starting work as a doctor, 25% of my classmates were leaving the profession within three years of graduation.

I hypothesised this was because medicine hadn’t evolved to cater to a younger generation of doctors and what they wanted. Essentially there was an old guard saying this is how it is, this is how we did it, this is how it should be and this is what you’re going to do and there was a group of the younger doctors going well screw you, I’ll do my own thing.

I started MedRecruit then purely at the time to help doctors create a lifestyle in medicine. I guess what drove me to that is when you’re a doctor you’re always a doctor, you keep the patient as the end goal, so I hypothesised that if you could help a doctor find what they loved in medicine, if they could travel a bit, live at the beach, try some different professions, take them out of the pressure cooker that is the ladder in the medical profession, that they’d find what they were passionate about and they’d be better doctors.

That was the premise I started MedRecruit on. It hit the nail on the head because we grew really quickly by the third year and we’re the fastest growing service business in the country. It was purely because I had a purpose for the company that was well beyond me. I had my own ambitions as well, I wanted to create a global group of companies and have financial success and that sort of thing as well, absolutely. But my main driver was that we needed to change our profession.

Now the thing is that driver is what has led me to evolve. A few years ago I looked at it and said I can’t have the impact I want to have in medicine just through MedRecruit. We’re having an impact with the people we work with, but it’s not changing things on a wide enough scale.