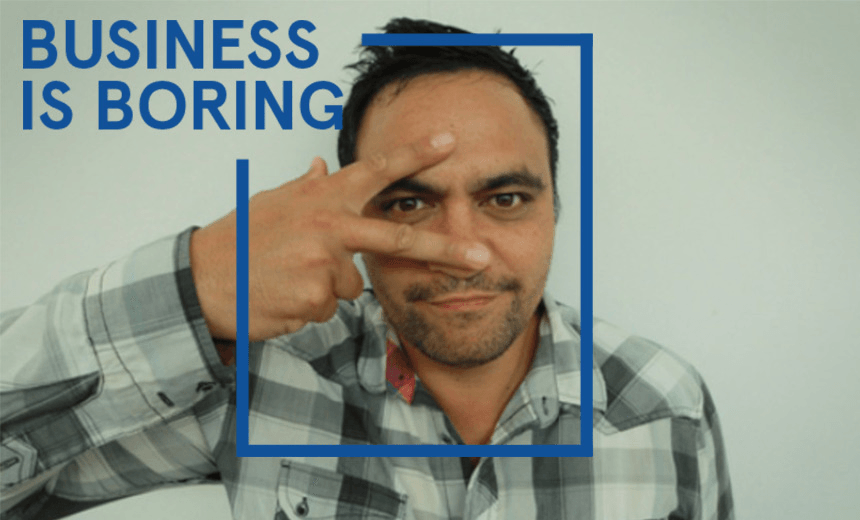 Business Is Boring repeat: TV Producer Bailey Mackey on being in the middle of a global bidding war

Last July veteran TV producer Bailey Mackey (Code, The GC) came to the Spinoff Towers to talk about the business of making television. Earlier in the year news had hit that the production company he runs, Pango, had sold a television format to Freemantle Media, the world’s biggest TV outfit. This was a massive coup, made all the bigger by the fact it was an under-the-radar show called Sidewalk Karaoke, hailing from Māori TV.

Bailey talked Simon through the bidding war that surrounded the format and about how a good idea with the right brain and guts behind it can make it all the way to the top, even if its origins are comparatively small.

Now you’ve sold a format. So the big news is Freemantle [Media] coming on and picking up Sidewalk Karaoke. Tell us about that format and how you got that off the ground.

I was with Black Inc, which was a show backed by Eyeworks, which was Julie [Christie]’s company. Then nearly three years ago now I set up my own company, Pango, and one of the first ideas I had under it was a show called Karaoke Cab. I could see what Homai Te Pakipaki had done for Māori TV and thought that I could re-duplicate that magic in a cab.

Anyway, we tried to shoot something with it and it just didn’t quite work. Like, low energy and it was only the cab driver and the contestant. A mate of mine out in L.A said “why don’t you pull it all out of the taxi?” and I was like “wow, great idea!”

So we pulled it out of the taxi, had the exact same set up, changed it from Karaoke Cab to Sidewalk Karaoke. We shot some sizzle, like a little pilot thing and then sent it out to all the networks who had quite a bit of interest. Māori TV came back and we did a deal and then I attended MIPCOM and MIP TV which are in April and October every year in Cannes which is the big TV market.

Firstly I took it last October and we got quite a bit of interest, like a lot more than we thought we would. And then this April, because it had gone to air, we got a lot more interest. I don’t mind saying this but there was a bidding war between three global companies and it was an incredibly exciting period, you know, to go through a four to five week period where you’re being feted by some of the biggest media companies in the world.

Because they are. I mean, Freemantle are huge!

Yeah, it was an incredibly difficult position to be in because you kind of think “oh, these guys are really nice guys” or “these people…”

“…we’re at a restaurant in the Riviera…”

Mate, that’s right! [laughs] Restaurant in the Riviera, restaurant in L.A, in Hollywood, things like that. So, you know, we went through a considerable process before partnering up with Freemantle and it’s been awesome. [Now] I understand what it must be like going from the minor leagues to the major leagues in baseball or making the NBA because these guys are on another level in terms of just how they roll things out. We’ll have a conference call and there’s twelve countries on the line. In terms of the different parts of the world and different departments and things like that. So I’m enjoying that ride, it’s an incredible place to be in.

What does that mean for you? Does that mean you keep working with them on this format, or are they going to have a look at your back catalogue, or are you going to develop new stuff with them? Is it a great new door that’s opened?

I think probably a little bit of all of those. Because, as you understand, one of the things is that you don’t want to be a one-hit wonder so we’re trying to follow that up with something else but what it does mean is that we become a lot more attractive to potential overseas [buyers], you know, for an acquisition.

It also means that new doors are open, that we have a lot more credibility when we talk to people, when we pitch overseas. Because for me, I think New Zealand is a country which has an economy that’s largely been built on the primary sector, but I think our most underutilised areas are our IP, you know, and our ideas and our people.

There’s that old saying; “He aha te mea nui o the ao – what is the most important thing in the world? He tangata, he tangata, he tangata – that it’s people.” I think that it’s our human resource that gives us the edge, even though I think we’ve got fantastic activity in the agriculture section and things like that. I definitely think that the new knowledge economy and technology plays a huge, massive role and will become important in the next few years.

I think essentially one of the coolest things is that you could take an idea on a small station in this country and sell it to the world’s biggest media company. It’s such a cool thing and it just shows that a good idea with the right execution can make it anywhere in the world.

That’s right. It’s been a while though since something has, I guess, risen out of here but the interesting part is you’re right, that’s the thing that I’m most proud of. It’s a show that’s on our indigenous broadcaster. Mate, I was in the meeting in LA at the Freemont Hotel in Santa Monica at Real Screen U.S.A which is a big conference, probably about four or five hundred of the most powerful people are at this conference. And I sat across the table from Sally-Ann Selsano who makes Jersey Shore, and she was in raptures over Sidewalk Karaoke.

She was telling me how much she loved it and things like that and maybe I’d partner up with her on it [in the] U.S. It was an incredibly proud moment to sit there and think “wow”. I obviously knew who Sally was from her success and just to sit here and think “wow, here we are talking about this little Māori TV show.”