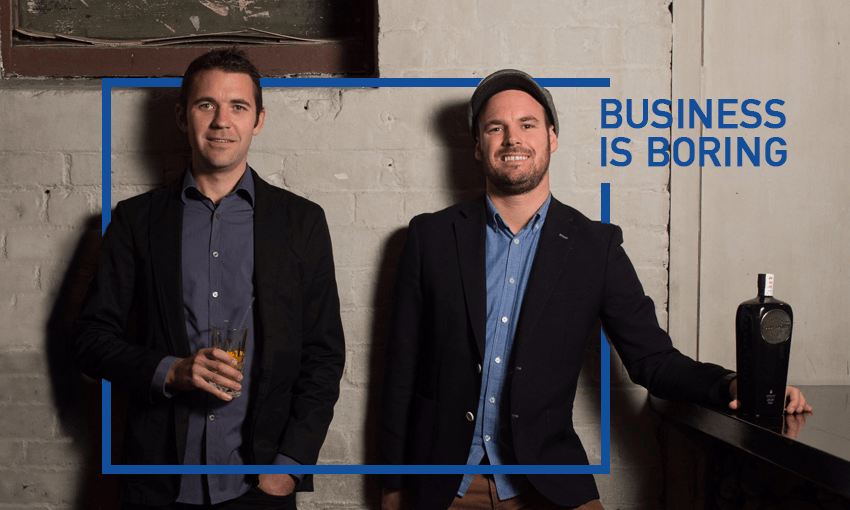 Business is Boring is a weekly podcast series presented by The Spinoff in association with Callaghan Innovation. Host Simon Pound speaks with innovators and commentators focused on the future of New Zealand, with the interview available as both audio and a transcribed excerpt. This week he talks to Dan Mclaughlin and Mark Neal, co-founders of Scapegrace Gin.

It was a great win to get after a big run and a lot of change. The gin had recently changed its name from Rogue Society to Scapegrace, a huge undertaking and big risk in the name of the bigger game of making it overseas. And making it they are, beating more than 600 other gins to take out that supreme award. That 600 number represents a 50% increase in entrants from the year before, part of the huge wave of growth in gin that the Scapegrace guys timed very well, having started in 2014.

How do you go from a standing start in four years to the top? How do you become the top selling super premium gin in New Zealand in even shorter time? And how do you add around 40 countries and heaps of states in the US while changing your name? To talk the journey, co-founders Daniel Mclaughlin and Mark Neal joined the pod.

So how did you come to start a gin company?

Daniel: We started seven years ago. Mark is actually my brother-in-law so [and] we used to get together a lot and drink gin from all around the world. We came to the realisation that you could walk into a local liquor store and there’d be a lot of gins from the likes of the UK, Europe and the US, but there wasn’t anything that represented New Zealand. We thought with New Zealand being this clean and pure environment, there was an opportunity to explore a premium New Zealand gin.

We knew the gin category was quite stuffy, English and very traditional and being in our early 30s there wasn’t really anything that spoke to who we were as gin drinkers. So we started on our gin journey: who makes the best gin? What’s on the market at the moment? Talking to distillers and bartenders and really just diving into the whole process and then doing a lot of work on brand positioning and market. We spent about 2-3 years working on the product that we launched in February 2014 and we’ve been running ever since.

What was the thing that pushed you to finally launch the gin?

Well, I guess it was realising we actually had something good for a liquid perspective. We basically had to test that in front of a lot of bartenders, experts in the industry and distributors, from that we realised the spirit was actually really good. We moved on to the brand positioning more where we really wanted the brand to be positioned and we found a really nice sweet spot, as well as a combination of working on the brand, packaging design and all that kind of stuff as well.

So yeah, we were really happy with the product that we had and people were saying the same thing. Not just friends and family that had to say ‘this is great’ but actually putting it in front of an audience full of experts who were saying it’s good too – then you know you’ve got to give it a crack.

How long did it take before you were the top-selling premium gin in New Zealand?

It was a number of years before we really cracked that. We started off from day one and it was myself and Mark slinging cases out of a small office in Grey Lynn; it was just the two of us. Mark would maybe look after sales and I would look after the commercial side of things and we were basically shoving cases out the office door. We built around 100 odd bars as customers and maybe 30 to40 retailers, and after about six months we got our first distributor online which was Hancocks Wine Beer and Spirits Merchants. They basically took us from a small distribution base to a really large distribution base throughout the country. We ranged in a lot of the best bars and restaurants and hotels and pretty much most liquor stores, and that allowed us to take a step back and work on the brand.