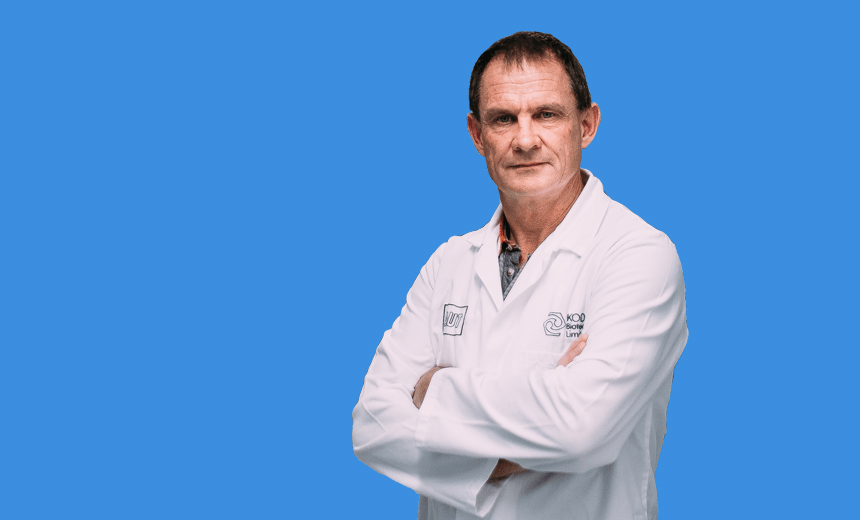 The cure for cancer may be closer than we think, all thanks to a Kiwi invention

Every company these days has a lofty goal. App makers with silly camera filters say they exist to bring humans together. Businesses say they are out to change the world and make it a better place, but often that’s nonsense. Not so for today’s guest. Professor Steve Henry, the inventor of KODE Technology, has worked to make commercialisation and mass application of research in partnership between his company and AUT. His work developed a compound which is now being developed into a potential cure for solid cancers. It’s also in development for products that could be used to prevent people with surgical implants getting infections. And he’s only just getting started with the applications of his technology.

He’s CEO of KODE Biotech, a biotechnology company he’s been building since 1996, taking his research into synthetic molecules and how applying them to cells and surfaces can change the way they interact with their environment. For example, coating a cancer cell with a synthetic shape can make the body see it in a way that means it can fight it. Something Steve will explain better shortly.

This idea – commercialisation, patenting and market development – has seen Steve Henry selected as a finalist for the 2008 New Zealand Ernst and Young Entrepreneur of the Year and the 2011 recipient of the Royal Society of New Zealand’s prestigious R.J. Scott medal, in 2015 KODE Biotech won the Supreme NZ Innovator Award and this year Steve has become the first Australasian to secure a spot in the world-leading Johnson and Johnson Innovation centre, JLABS, in Houston.

Oftentimes, I think, people think of innovation as being the invention. So in this case, that would be coming up with the technology behind KODE Biotech. But actually the innovation in your thinking, if I’ve read it right in the past, is all the people then doing the work to commercialise that invention – that is the innovation. Is that the way you look at it?

The most simple way to explain it is: invention is taking cash and converting it into an idea; innovation is converting the idea into cash. That’s a crude way of looking at it, but it’s about taking the invention and making it viable, making it something useful that people can use. That’s really the hard bit about it. We happen to be doing both ends. We are generating the ideas for it, and our innovation is actually enabling others to create products, so we’re partnering the innovation side of things, and even partnering the research side of things because the platform has grown so big. To put that in context, we have over 27 patent families with more than 150 patents. So that’s what we do – we control the intellectual property and enable others to do the invention. And in fact KODE Biotech even contracts out all its research these days, so for example the AUT Centre for Kode Technology Innovation is not part of KODE Biotech the company, it is a contractor based at AUT, where there are over ten PhD students and professors, and their job is to be developing the next generation of code technology.

The number one learning is that it’s so damn hard it will just about kill you. You have to have perseverance. You’re going to get knocked and kicked the whole way, and you have got to say ‘OK, I can still do it’. It is the hardest journey you could ever take. That’s the number one learning I think. The other thing is you have to learn how to survive, you have to put in mechanisms to be able to survive. Because it’s tough raising capital in New Zealand to fund ventures that are going to make losses for 10 to 15 years plus. Even though we’re generating revenue – and reasonable volumes of revenue – we keep on investing until the big pay day comes through.

And maybe the big pay day is still a few years away – everything takes time here. So you have to have money to be able to deliver on research. It’s a risk profile. It’s very hard to raise capital in New Zealand for innovation, so you have to design your company for global, you’ve got to design your company for ability to scale. And you’ve got to think how can I do all those things with virtually no money based here in New Zealand. You can do it, but you’ve got to adopt a mechanism that can allow it. And of course, by basing our company on a university campus, it’s given us ability over the years, when we’ve had big teams, that when times get tough we can strip down to a survival team and we’ve stripped down to survival teams a couple of times during our journey.

When you mentioned there you have to think global, you have to have a structure that can handle the growth, was that something that you studied in tandem with science and engineering and the like as you went? Or was that stuff you had to learn along the way?

You learn it along the way. I think one of the biggest risks is that you adopt somebody else’s model. And there’s also what I call the success factor. So, if you put 100 people in the room and gave them all the same idea, one of them might become successful and that person will then write the book on how to be successful, even though everyone applied exactly the same model. So that doesn’t mean the models you see are going to be the model you should adopt. It’s sometimes being in the right place at the right time, and of course you need to survive, you have to be adaptable within your model. But if we look at our business model, it’s unchanged from the model that we presented to shareholders in 2001-2003. The business is still running on the same model.

But you adapt and adopt and you focus on it. And you need to be incredibly focused, particularly when you’ve got a problem like we have – our applications are totally diverse, we’re completely unfocused in our applications, but we’re 100 per cent focused on ‘if it’s not KODE technology, we will have nothing to do with it’. So you need to learn how to be focused, you need to learn how to put in systems, and you need to work to a plan. For me, it was learning along the way, but the most valuable learning I’ve seen is from observation and from war stories. Listening to other people – what they’ve done, what’s worked and what’s failed. But you’ve got to chart your own course. Don’t try and mimic something somebody else has done, because that time has already passed.

If you want more we recommend watching Steve’s Tedx talk.