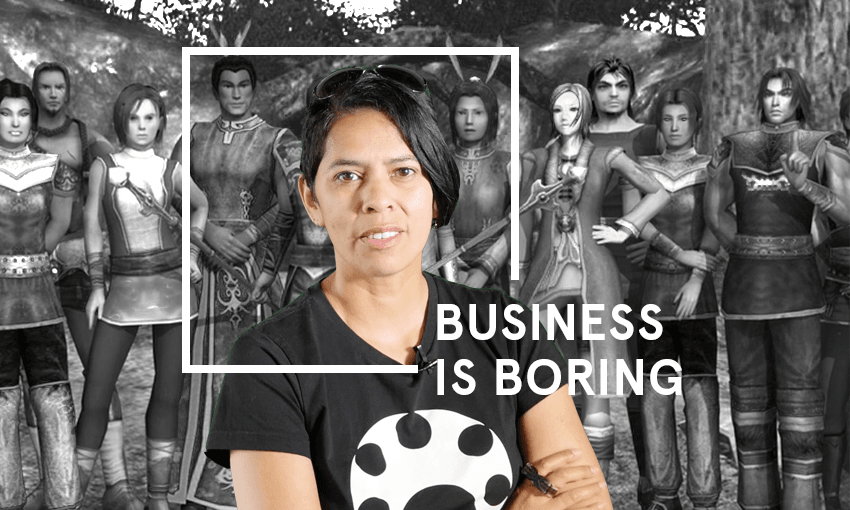 Why being from Aotearoa makes selling your video game overseas easier

Business is Boring is a weekly podcast series presented by The Spinoff in association with Vodafone Xone. Host Simon Pound speaks with innovators and commentators focused on the future of New Zealand, with the interview available as both audio and a transcribed excerpt. This week he talks to Maru Nihoniho, founder of game studio Metia Interactive.

In 2003, there wasn’t much of a computer game development industry in Aotearoa. But an entrepreneur that loved games, graphics and design set out to change that and make a PlayStation game, not worrying that they didn’t even have access to the Sony development kit. They managed to assemble a team, make a prototype and sell the idea internationally – all on their first try.

This pioneering approach has continued for Maru Nihoniho, whose Metia Interactive has gone on to make games that carry great messages along with the fun of playing. There was SPARX, developed with the University of Auckland, which gamified the treatment of depression with great success, winning awards and getting written up in the British Medical Journal. There was The Guardian, with its a wahine toa  – a strong Māori women lead – doing the rescuing. And Māori Pa Wars, a take on the traditional tower defence game available in te reo and quietly telling stories from history.

Maru has been recognised for services to gaming and mental health with a Member of the Order of Merit and has been appointed by the Crown to the board of Māori Television. She braved the many stairs to Spinoff Towers to talk to Simon about her journey.

You’re right there. I mean, that was really tough because once I’d decided and I’d set up Metia and I thought ‘right, I’m heading over to LA, going to the E3 conference, I’m going to do this, I’m gonna find out all about the industry and meet people and it’s gonna be fun, just like gaming’… I remember my first conference. I got to LA, got to the convention centre and it was just jam-packed full of people. Like, thousands of people. There were games on display, there were talks on the other side of the centre, and I remember feeling lost standing there. Lost and amazed, actually. But lost as in I didn’t know anybody and I didn’t know where to start. It was like ‘okay, where are these people at’? So I spent the first day there just wandering around, having a look at the games that were out there on display…what’s the new platform? That’s when I noticed the new PlayStation Portable and I was like ‘ooh, a mobile gaming device? That’s cool!’ You know, it was very difficult. Not to mention out of all of those thousands of people that were there, very few of us were female. It was like ‘where are all the ladies at?’

What kind of ‘very few’? Was it hundreds? Tens? Thousands?

Tens. It was tens. And it was funny because we all sort of eventually found each other and gravitated towards each other and hung out, which was really cool because now some of those ladies are way up there in the industry and we were all in the same boat back then. It was kind of just, you know, what do I do and how do I get in front of these people? Because I could see my male peers, other game developers, approaching game developers easily. ‘Hi, I’m from wherever and I’ve got this really cool game idea. Let’s head on down to the bar for a drink and discuss it.’ Then off they’d go and I’d be like ‘okay, I really can’t do that. It’s not going to work out very well’. I remember standing there thinking to myself, ‘how am I going to stand out?’ Never mind that there’s thousands of people here, but obviously, I’m one of the very few females here, so who’s gonna take notice of anything I’ve got to say?

It was quite a dilemma actually. Thoughts were flashing through my head and all that and I stood back and I thought ‘well, I can’t be anybody but just myself, so I’ll just be myself’. I’ll just be brave and go up to a publisher and say ‘hi my name’s Maru. I’m a games designer,’ because at that time I hadn’t developed any games, and I think ‘I’ve got this idea that you might be really interested in.’ And they’d sort of stand back and look at me and think ‘where are you from?’ The accent. I’d be like New Zealand and they’d be like ‘oh! Right! Lord of the Rings and Whale Rider!’ or something like that. It’d be something they know about New Zealand and so that would be the conversation starter. So I’d have to talk about New Zealand for a good half hour or whatever and then eventually come back to my idea. So it was like ‘alright, don’t fuss about. How I’m gonna get in front of these people [is] just do it, and I’d just go up. What’s the worst thing that’s gonna happen?’ They’re just gonna say ‘oh, sorry, we’re not interested’ and then I’ll go and try someone else. It was quite challenging.

Watch the video below for Maru’s advice to help you break into the gaming industry.