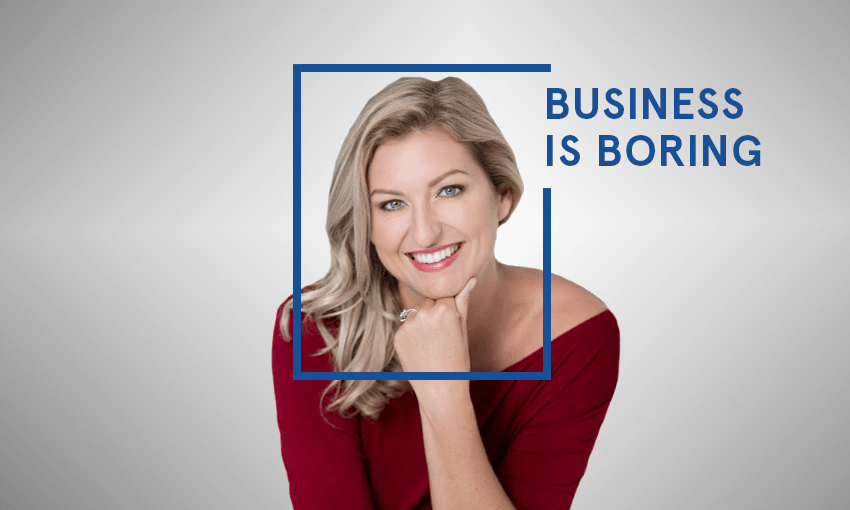 Business is Boring is a weekly podcast series presented by The Spinoff in association with Vodafone Xone. Host Simon Pound speaks with innovators and commentators focused on the future of New Zealand, with the interview available as both audio and a transcribed excerpt. This week Simon talks to Jenene Crossan about her kick-ass career in tech.

As business thinker Cindy Gallop says, there is a lot of money to be made by taking women seriously. But the reason there’s that opportunity is that traditionally, particularly in tech and business, women and women’s interests have not been. One person who’s been fighting this battle over the last 20 years is local entrepreneur Jenene Crossan.

In 2018 it’s easy to take for granted the social web, paid independent female voices, and that Teen Vogue is political. But in 1999 it wasn’t like that. This was the year Jenene founded her website, NZ Girl; it was also just shortly after Google was founded. At the time Jenene was already four years into building websites and living online, and she saw where things were going with media.

NZ Girl went on to be the biggest online magazine in the country and in 2015 it was named best blog. It was also a business at the time before there was a clear business model for online media. This led Jenene to found companies to solve advertising online, to found Bloggers Club – one of the first NZ companies to monetise influencers – and more recently, Flossie.

Flossie solves two problems at once. It helps women find curated and recommended salon services and book them efficiently and effortlessly, and it helps salons drive repeat and new custom, especially in quiet times. The beauty industry was ripe for such a service, one has grown into Australia and the UK, with big things on the horizon.

To talk about ups and downs of life as an entrepreneur, Jenene joined the podcast.

[There’s such] momentum around Flossie at the moment: the expansion into Melbourne and the UK. They’re exciting markets! Melbourne with four million people, the size of New Zealand in such a contained market, a sophisticated market. And the UK with fifty plus million people in such a small area.

Yeah, it’s really interesting – Melbourne for us is kind of an additional test. As I’m sure you’ve found in the past what inevitably happens in investment, is people go ‘well that’s really nice what you’ve done in New Zealand’ and sort of pat you on the head but until you’ve taken it to Australia they’re not really going to take it all that seriously. You’ve got to be able to prove that you can transfer it from one to another.

So it’s an extension of the proving of the business case, and for us it’s specifically around testing this concept of coupling products and services together, which is the next iteration of Flossie.

Regarding the London market, in spite of the hideous jet lag and time zones that go with working across the world, what I get so excited about is it’s really similar to New Zealand in a whole lot of ways on the consumer level.

The salon industry is really similar and what we have is a first-generation player up there with Treatwell, who have been doing over $100 million a year in revenues, and has exited for just under half a billion dollars with a whole heap of early stage investors who’ve done well out of it. But it’s effectively Groupon with a booking button.

So the market is absolutely ripe for a premium artificial intelligence, deep personalisation-led offering like Flossie.

It’s a really wonderful time, they are keenly pursuing female founders, so it being welcomed with open arms. We’re getting passed from one person to the next for ‘you need to meet’ or ‘this person’s going to get behind you, here’s how you can make it happen’.

One of my biggest regrets is that I didn’t take myself out of this market when I was 22 and had all these wonderful ideas before anybody had even thought about what the internet was. I didn’t get out of New Zealand, so as I say to myself now, what’s your excuse?

For entrepreneurs starting out, what do you tell them when they ask you for advice?

That’s a good question. It’s that whole idea of letting go of the 20 year old inside me who’s been driving the bus for a while and calling the shots, and embracing the 40 year old inside who’s a heck of a lot more wise, probably a lot calmer, and actually that was quite a revolutionary moment in my head.

The reason why I go with that is passion drives you the most when you’re 20. Passion and enthusiasm, which are great things to have on your side because I know that a lot of people lack that. It’s usually what gets you out of bed in the morning and to go on this relentless pursuit.

The art of making it up as you go along has to be the most important piece that you’re comfortable with. Your team are divided into those who are completely comfortable with doing that and those who are not, and that enables you to move forward or not. If you don’t have people who can do that, they’re probably not going to work well in an entrepreneurial environment.