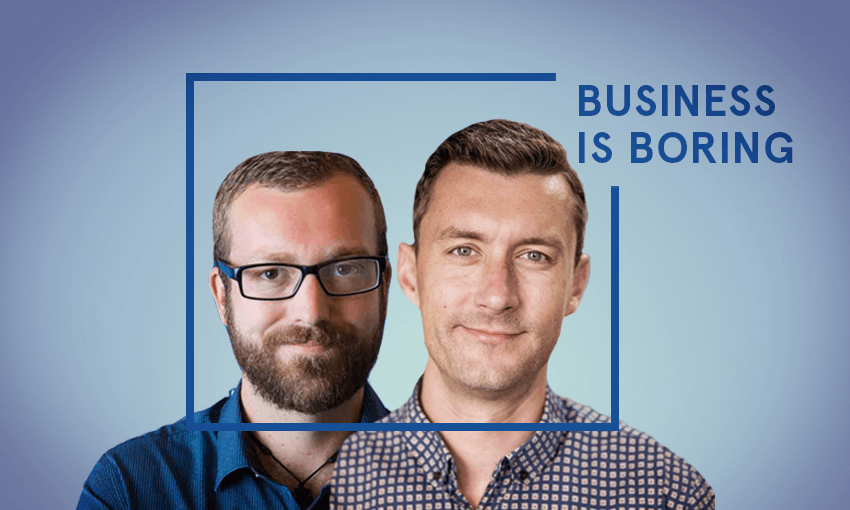 Business is Boring is a weekly podcast series presented by The Spinoff in association with Vodafone Xone. Host Simon Pound speaks with innovators and commentators focused on the future of New Zealand, with the interview available as both audio and a transcribed excerpt. This week Simon talks to Alex Clark of Press Patron and Duncan Greive of this here website about how crowdfunding can help create journalism that matters.

We’ve got a bit of a double header this week – we’re talking about a future model for sustaining quality journalism, first with an entrepreneur behind an app making it possible, and then with Duncan Greive about how The Spinoff are using it to make stories that matter that otherwise wouldn’t be possible.

And it is a real issue all around the world at the moment. Media is in a bit of a bind.

Fake news. Fox News. Clickbait. Mike Hosking. There are a lot of terrible things happening in the media but it is not all gloom and gloom.

In the wake of the holy what the hell disruptive force of President Trump, outlets like the Washington Post and New York Times have turned around years of subscriber decline as readers vote with their wallets about the importance of news and what is fake and what isn’t.

And it’s not just overseas – locally outlets like Scoop, Newsroom, Public Address and here at The Spinoff have all had funding from their readers to do more of the kind of work they value.

Press Patron is the provider, the people behind the the little ‘Become a supporter’ buttons you may have seen popping up around the place. The founder and CEO of that company, Alex Clark, saw this trend from years out, turning his masters thesis into a real world product now in NZ, Australia and the US. Press Patron helps 25 plus outlets harness their following and supplement ads, paywalls or whatever else is needed to keep the lights on and the stories good.

To chat about the future of news, the product and the journey, Alex joined the podcast. And to chat about the other side of the equation, I’ve grabbed Duncan Greive, managing editor here at The Spinoff, to chat about how they use Press Patron and what it allows (Greive’s interview is audio only).

Either download (right click to save), have a listen below or via Spotify, subscribe through iTunes (RSS feed) or read on for a transcribed excerpt with Alex Clark.

Do you see things like Trump coming along and helping to re-energise some of the liberal and centrist media in the States? Do you see the Trump effect in some of the people that you’re working with?

Alex Clark: I think we’ve got a different dynamic. With Trump, that’s created a conversation around the fake news versus quality news issue. In New Zealand though, when we see the highest level of support for each of our publishers and the journalists who are a part of those teams, it often happens around those hard-hitting stories. So when there’s a big investigation that happens, has some impact on wider society, readers really rally behind that and really appreciate that. That’s where we really see that support, it’s that high-quality journalism, the stuff that’s the opposite of the entertainment or the cliche click-bait, for want of a better word.

What kind of things help people to see past the message and click? I say that because I must’ve clicked ‘no’ to the Guardian 100 times.

Alex: I think it’s different for everybody. I do think it is when they read something that’s really impactful and they can see the quality of that journalism, how it resonates in terms of the flow-on effects. I think some campaigns such as the Wikipedia and the Guardian approach risk being a little bit too forceful, so the message is very needy, it’s highlighted yellow, it takes up a lot of the screen. This is anecdotal, but I’ve had feedback that people find that a little bit pushy. We’ve taken a more passive approach where the campaign is there for when you’re ready to become a supporter. So when you’re ready and you’ve found a piece of journalism that’s really powerful, you can turn that passion into meaningful impact by becoming a supporter, and you can choose whatever level of support makes sense for you.

How’s the company going for you as a team? Did it play out like what you’d researched and what you thought the opportunity was?

Alex: Yeah, surprisingly. When I first did the market research and was trying to get the prototype off the ground there were quite a few cynics who said ‘people will never give money to journalism, they’re just being nice in your survey’. I firmly believed that those people were being genuine and I looked at the pattern of relative preference between those two options and it was a really strong model. The average in the survey was $11, and for a couple of months the average in real life was exactly $11 so it was freakish how close that actually was.

The people that said ‘definitely’ in the survey was 1.4 percent, and with the sites that launched with us in February and March last year, they’ve reported 1.2 percent [of readers who contribute to a site’s Press Patron] and they’re still growing, so it looks like we’re going to reach that, even pass into the two or three percent mark for our most successful sites. Some of them have far exceeded, one of our sites has achieved five per cent.