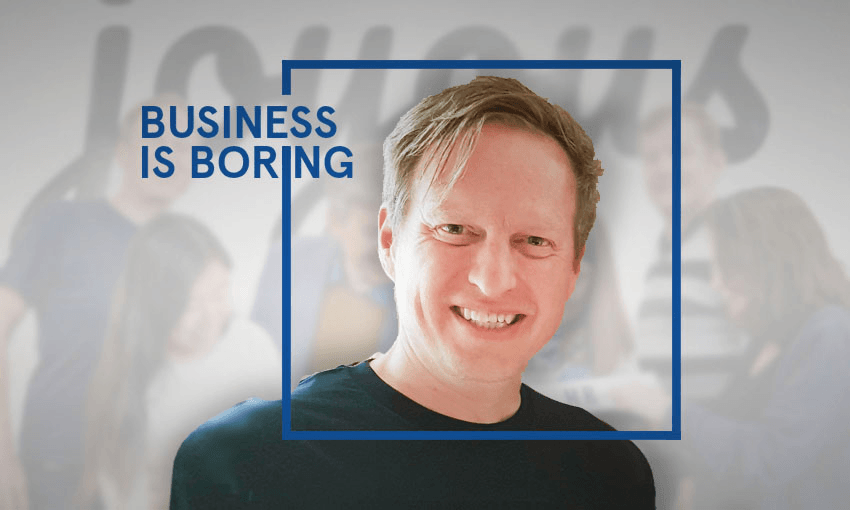 Business is Boring is a weekly podcast series presented by The Spinoff in association with Callaghan Innovation. Host Simon Pound speaks with innovators and commentators focused on the future of New Zealand.

One of the coolest things about the tech ecosystem is when founders cash out, instead of heading off to party and relax, they invest both their real and social capital to help other ventures.

One of the big names in the local SaaS (software as a service) sales and marketing world who has done just this is Mike Carden. He co-founded Sonar6 in 2006, a SaaS tool for human resources. It won all the awards you could want, blew up around the world, and in 2012, was bought by a big listed US company. Sonar6 was one of the big early successes in local SaaS.

He then went on to be an advisor or board member for high-growth tech companies like Flossie, ProMapp, and Ask Nicely, and has shared what he’s learnt from holding the different roles through his great blog posts and many speaking engagements. More recently, he’s gone back to being in start-up land, co-founding Joyous, a conversation based app to help break HR tasks into small, constant places for improvement. It’s a cool app at the front of making work and tech better, and it’s a great pleasure to have Mike join us today to chat about the journey, getting back on the horse, paying it forward, changing the face of tech past an overabundance of mediocre white men, and maybe the story of how he crashed a plane into the sea.

I imagine when you’re dealing with HR software and enterprise clients, you’re dealing against some very well-funded competitors, who have probably spent more on a conference booth than your entire yearly marketing budget. What kind of things did you have to do to stand out?

It’s interesting – there’s an expression that constraints are the midwife of design. I think having constraints does force you to make more inventive decisions. We used to go to this trade show called the HR Tech conference which was one day and it’s a huge conference, 500-600 vendors are at this conference. It was in Chicago in those days, a huge expo floor and there’s giant stands that people like SAP and Oracle put up and they’re two stories high and have Cirque de Soleil acrobats on them. I’m not making this up. You walk in there wide-eyed from New Zealand like ‘we’re not in Grey Lynn anymore.’

The thing is it’s basically impossible to compete by running the same rules that they run. They’ll spend $200,000 easily. They’ll fly in their top execs, they’ll do all this construction, and we had 5 or 6 thousand the first time we went there. We hired the space for a booth but instead of building a booth, we just put a cardboard box in there.

It was big enough to fit inside. It had a low entrance and if you crouched down and went inside we had a video you could watch about the product. Big enough to fit about three people in if they were all bending down. The idea we had was that a trade show is not the best place to learn about software that’s on the internet, the best place is on the internet, so we made that commentary.

That’s one of the sorts of things that the people who run the show don’t really see. I think to quote, we were ‘making a mockery’ of their show. which is true, but at the same time it was hugely popular. Someone came up with the idea of letting someone write on the side of our box in markers. Someone wrote ‘Go Bears’ in marker and I thought oh, what a moronic thing to say, but then some kind of sports debate started taking place on our box. Passionate sports fans who also seemed to like HR Tech were descending upon the box to be a part of the argument.

At some point the people who ran the show realised they didn’t want us there. One of my fondest memories of the whole Sonar6 journey was watching my co-founder John Holt being escorted off the floor of HR tech because he is quite a cantankerous guy. We’d just done everything to annoy HR Tech. Looking back on it I don’t know what we were thinking.

That’s so cool for anyone who’s ever walked the floor at one of those conferences, they are so dull and so corporate and so shiny and it is amazing that with some thinking and acting a bit differently there is room to really stand out there.

And not just at a philosophical level either. We won people’s choice for best booth. And also when you looked at the column inches we’d generated, we completely outstripped SAP who’d spent $200,000.