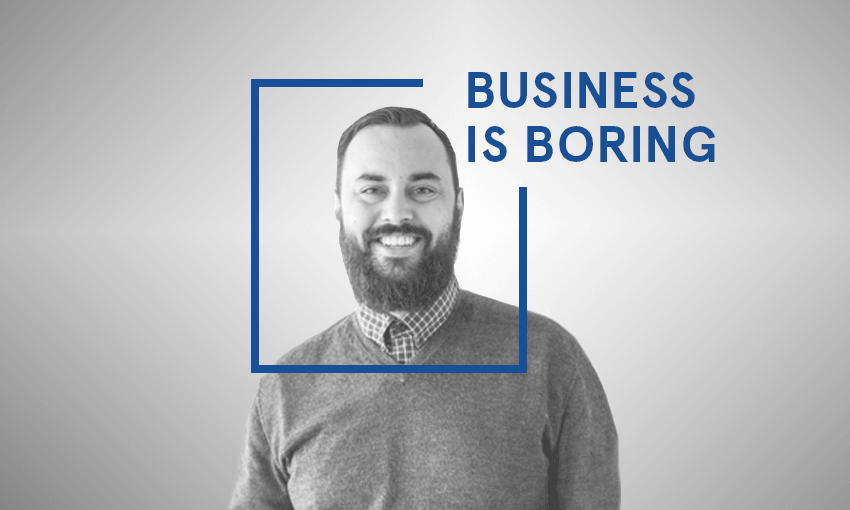 Business is Boring is a weekly podcast series presented by The Spinoff in association with Vodafone Xone. Host Simon Pound speaks with innovators and commentators focused on the future of New Zealand, with the interview available as both audio and a transcribed excerpt. This week he talks to Nick Shewring, co-founder of BizDojo, a company leasing co-working space to companies and creatives.

Great entrepreneurial ideas come from people, but also from environments that foster creativity, provide support and that lift people to help them to go further. This is part of why co-working spaces- places where creatives and companies can rent space by the desk or the week – have exploded around the world as hubs for people to go to, to make their dreams happen, and to keep the motivation and the energy up.

And here, the name BizDojo has been synonymous with co-working since they started on Karangahape Rd in 2009. Founded by Jonah Merchant and Nick Shewring, they grew from a few people at 12 desks to now having thousands of residents, and a string of coworking and collaborative spaces across New Zealand, with some big plans for 2018.

They were also a big part of bringing GridAKL into being – spinning up the original GridAKL prototype space and later running co-working, networking, business support, events and activations in a new permanent building. With BizDojo spaces and events across New Zealand, they’ve played a role in thousands of creative enterprises and have been keen to give back when they can, having taken leadership positions in the industry.

Like last year, when they ran a survey around mental health issues facing entrepreneurs under their initiative designed to support and help founders in New Zealand – Founders Central. They found some concerning stats. Most respondents had faced problems, and most of them had not sought help due to stigma, time or resource concerns.

This is a problem that is perhaps built into the culture of the founder that goes further than the normal to win, but it is one that needs to be talked about. Very recently the local scene lost a wonderful man that many of us worked closely with and rode the rollercoaster of this life with, and that really hits home how hard this can be, and how when what we do is not ordinary we need to have extraordinary support in place.

As part of highlighting this issue last year, BizDojo co-founder and chief entrepreneur Nick Shewring talked about his own experience in the context of his success and life, and how asking for help and being honest about the ups and downs is important.

If anything we talk about in the podcast today leaves you wanting to talk about your experience please do reach out to Lifeline on 0800LIFELINE.

What was it about the multi-disciplinary melting pot with so many creatives thrashing about together? Was that something that led you to co-working or was co-working something in which you saw the possibility of that outcome?

We were working with IDEO and Designworks were the lead consultancy and design practises that were leading that project. Their strategy and methodology was around taking as many completely multi-disciplinary people, putting them in a room, and going ‘right, solve this problem in a way that’s never been thought of before,’ using outcomes-based innovation techniques, and for us, we were thinking this feels like the most natural way to work. So we had a game developer, a designer, an artist, a musician, an engineer, a few mavericks like myself in there as almost unemployable lunatics. The chemistry that came from that diverse mix of experiences, ethnicities, and skills was amazing and at the end of that project we thought well, we can’t actually ever go back to just doing normal projects, we have to work this way.

Why I love co-working and why I love this industry is at its heart it’s a social business. People come in and work there not because they’re looking for a desk or a chair, but because they’re looking for a sense of belonging and they’re looking for a community they can be a part of. When you clear away all the noise and all the bravado of us as human beings, we’re actually pretty shy. Often we feel pretty lonely, and if we can choose we’d want to surround ourselves with people who support us and help us when we’re having those low moments. I think that’s the universal thing with co-working. That it’s been such a helpful movement around the world.

From the beginning you and the team had a slightly different approach on it than ‘let’s find a cool space and just get some fast internet and some desks,’ because you always had a curated approach where you wanted to make sure you had a mix of skills and capabilities. How did you go about seizing on that and making it something that happened?

From the early days, from the bootstrapping days with no pay and being evicted from houses and all of those fun things that you do when you start a business, especially one that’s can be as intensive as co-working, we knew that we wanted our community to thrive and scale and grow. That wasn’t necessarily that they take more space, but just on a personal level. Scale and develop and grow and reach their potential, and that was always the kind of ethos. Be bold, be original, always do the right thing and all these things that were kind of inherently ingrained in our DNA for the company around how we support each other, was really from the start. We realised that the more energy we put into helping the community be more resilient and happy and deal with the shit that comes from life, the byproduct of that was they were more successful.

Having been so up close to so much success and the growth of people and companies inside your spaces, you’ve also seen, I imagine, a lot of the hard times that entrepreneurs go through, and a lot of the consistent difficult experiences that people have to ride. Was that part of what led your team to put together the mental health survey?

Absolutely. It’s the age-old analogy that it takes a village to raise a child. It definitely takes a village to raise a successful startup and successful company. As entrepreneurs and founders, we’re almost a little bit crazy. We run towards problems. Where everyone else sees a problem and goes ‘I don’t want to deal with that, that looks too noisy and messy,’ we on the other hand go ‘oh my god that’s an awesome problem, how can I run towards that and fix it.’ And that’s exciting, but what we saw time and time and time again as we sat down and talked to our residents and community… for us everything is about how they’re doing, how they’re really actually doing, and it’s heartbreaking when you see marriages fall apart because they haven’t been able to build enough financial stability in the family, or their business partnerships fall apart, or their ideas fall over, or they just give up because it’s so brutal and they just can’t handle the pressure.

We saw this over and over again and thought, is this just an isolated thing to us? There were lots of conversations in the media around suicide and many of our residents and community members have lost people close to them. I have, and I struggle with that, so we thought we’d go out and ask the broader ecosystem how everyone feels and what was needed to drive life forward as a founder in New Zealand.

It was terrible to see some of the feedback come back but on the other hand we expected that. It was actually as bad as we thought. New Zealand unfortunately leads the way in a lot of the issues around mental health. We’re global leaders in the wrong thing, unfortunately.