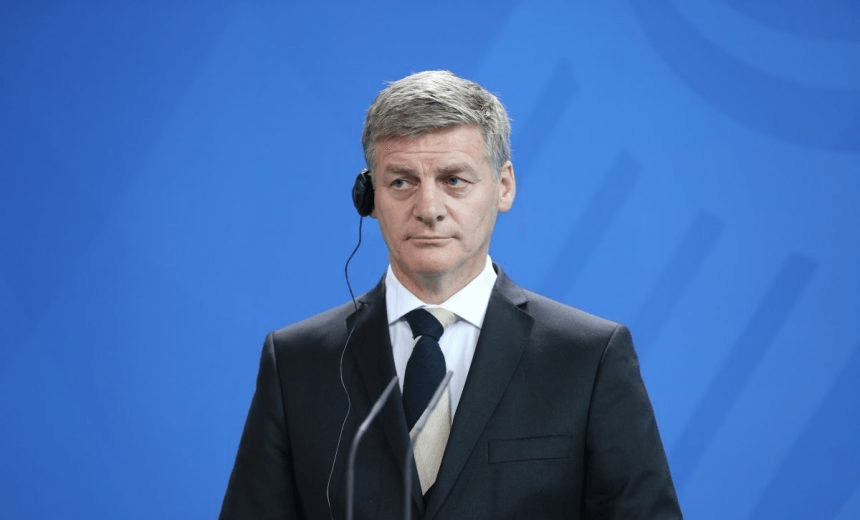 The 2017 NZ general election is on September 23. Here are 8 things it may hinge on

As Bill English sounds the horn for a September polling day, Toby Manhire take a deep breath and speculates on what to expect in the months to come. Plus: the key dates in the leadup to the election

And they’re off. Bill English has announced that the election will fall on September 23, a date picked according to the two fundamental elements of life in New Zealand: weather and rugby schedules.

Patrick Gower will be feeling very relieved. This from November:

So the politicians of New Zealand will be marking the spot indelibly on their wall-planners, stiffening the sinews and giddily texting. Gower will probably say on the news tonight, “there are only 234 days to go!”

What are the big issues that could prove decisive? Here’s seven for starters …

1. English as a second language

The sight of Bill English announcing the date of the election would two short months ago have been hard to believe. But I have double-checked and he definitely is the prime minister.

How’s he doing so far? Not bad at all – the trip to Europe went pretty well, though it got barely any coverage because NZ news broadcasting pretty much stops in January. The last few days, however, have not been great, with a number of mainstream commentators suggesting the response to the Trump visa ban was sluggish and insufficient.

Would John Key have handled it differently and better? Probably, if only slightly – he would very likely have found a quicker and more effective set of words that might even have reoriented the argument. But crucially, his response wouldn’t have been as scrutinised as English’s – and wouldn’t have been regarded as definitive of his prime ministerial style.

There is no doubt English is a steady hand on the tiller. He’s smart, experienced, moderate. But it’s the spectre of events, dear boy, per Harold Macmillan, that will be the test. How will he respond to the next one that hurtles around the corner?

Bear in mind, too, that John Key enjoyed – or earned, if you like – a staggeringly consistent poll buffer. If the National Party slips even three or four points, if his personal rating sits in the doldrums, what will be the response from MPs in marginal seats or the bracket of uncertainty on the list? Almost none of them has had cause from a poll under eight years of Key to fret about their leader, which in turn meant that there was something close to complete caucus loyalty throughout.

Key was helped, too, by a lot of crapness among the main opposition party. Can Andrew Little’s lot achieve non-crapness?

Labour and the Greens have a memorandum of understanding, and while some might say MMP means they should be free to disagree, the media and their rivals will, reasonably enough, push hard at any fissures they detect.

English, meanwhile, has followed his predecessor’s example in laying out which parties National can work with (tldr: Māori Party, ACT, United Future yeah; NZ First if we have to; Labour/Greens nah).

What about the Māori Party deal with Mana? If both parties’ supporters vote tactically, could they pull something off? And if it works at the polls does it translate to parliament, because somehow Hone Harawira might have mellowed but he still seems, you know, an unlikely National backer.

There will be a lot of attention paid to bottom lines, to electorate deals, to who can work with whom and who will rule out whomever. A lot.

The Auckland market is cooling, clearly, for now at least. But the wider story around housing – ranging from the homelessness crisis to the affordability crisis – seems unlikely to fade. Labour and the Greens will push hard on the issue, and though it is arguably not a basis on which property-owning New Zealand is likely to vote, it is hard to find anyone these days who doesn’t at very least have a friend or family members personally affected by the state of housing.

Everyone says “we need to have a grown-up debate about immigration” but that’s a hell of a difficult thing to actually do. New Zealand has, in comparison with many countries, Britain included, a high per capita immigration rate. It is an economic boon, but it can bring cultural and social – and economic, too – challenges. It will be an issue in 2017. Which brings us to …

As the immortal force of New Zealand politics, Winston Peters, will happily tell you, NZ First tend to do better in elections than they do in opinion polls. And they’re polling pretty well – especially given that it was not that long ago that they failed to make it to parliament at all.

The critical question is whether the party, with Shane Jones likely to sprinkle a bit of extra charisma into the election as a tipped NZ First candidate for Northland, can channel some of the Trump/Brexit populist, anti-globalisation, anti-immigrant energies in New Zealand, and do that without tipping over into a crankiness that turns off some of their target voters. Europe and America are different to New Zealand and the comparisons can be overdrawn. But if, say, the National Front’s Marine Le Pen manages to win the presidency in France – and she just might – then maybe we are seeing something really big, and who’s to say we’re magically immune?

For the most part, John Key enjoyed eight years in charge without having to deal with any serious foreign policy crisis – the challenges from abroad came mostly in terms of the then PM’s specialist subjects: economic winds and trade deals.

In contrast, PM English has had to deal with not just the fallout from Brexit, but with the face-melting astonishments wrought in less than a fortnight by another new premier, Donald J Trump. English so far has strained to walk a line between expressing concern at what’s playing out and commitment to maintaining strong bilateral relations in the national interest.

Will the pyrotechnic whirlwind of the last few days abate? Will Donald Trump piss off to Mar-a-Lago for a long sleep while things get held up in Congress and the Courts? Will Breitbart alumnus and chaos-agent Steve Bannon (“President Bannon”, as he’s been dubbed by many) assert himself as the navigator of the free world? Will the US provoke and China retaliate? Will the US-led effort in Iraq collapse and where would that leave NZ training forces? How stable is the Five Eyes intelligence club? What will happen with Ukraine? How about Putin and the so-called kompromat? It’s hard to dream up scenarios more implausible than much of what has come to pass in recent months, but it’s safe to say that Donald Trump, one way or another, will be a constant presence in the New Zealand election of 2017.

Predictions are a fool’s game after 2016, sure. But there are a few potential powderkegs that could yet get triggered in the NZ election. Can Kim Dotcom re-enter the arena somehow? Are the rumours about a new Nicky Hager book to be taken seriously? Will there be an almighty domestic scandal in, say, health, that surges from nowhere? Will the ACT Party, facing oblivion, do something spectacularly daft?

Gareth Morgan this morning announced that Geoff Simmons, his chief of staff in the Opportunities Party, will be standing in February’s Mt Albert byelection, which if nothing else adds some spice to what would otherwise probably prove a pedestrian contest. Can the “TOP” party make an impact? Will this byelection throw up a surprise? What about Colin Craig? Helen Clark? Anjalee the Elephant? Am I just naming things randomly and putting question marks at the end now? Yes?

The Lions tour New Zealand in June and July. If the All Blacks lose, and call me a heretic but they could, and if things go badly in the Rugby Championship, which will be nearing its conclusion on election day, that can’t be good for the incumbent party. It is probably OTT to suggest that it could be a deciding factor, but don’t forget how much the last guy made out of his role as All Black captain.

Key dates in the leadup to the September 23 election

Friday 22 September Midnight: Regulated period ends. All election advertising must end and election signs must be taken down