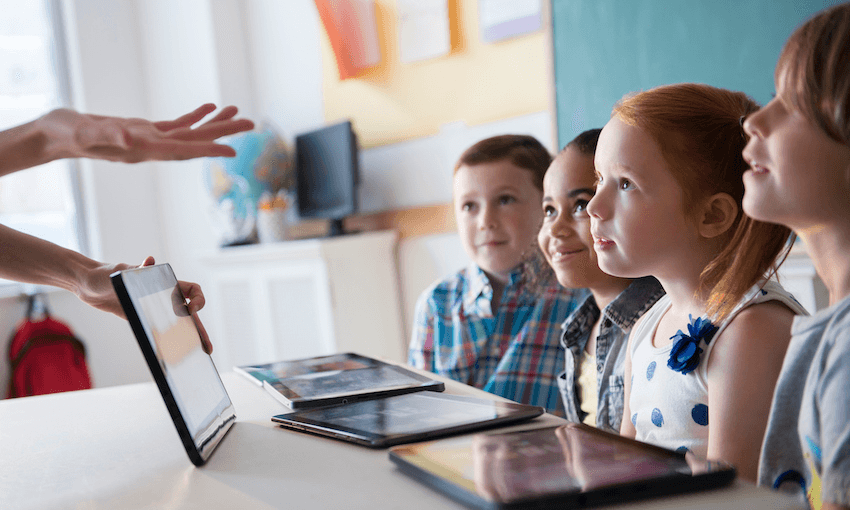 David Seymour: In defence of performance pay for teachers

The state should massively increase its investment in teachers, but take off the blinkers and recognise the best teachers should earn more – it works in the rest of the economy, argues the ACT leader

A recent Spinoff article starts by quoting me as wanting to set $1 million aside as a fund to better remunerate teachers. Now, I don’t want to be pernickety, but: the difference between a million dollars and a billion dollars, as ACT actually campaigned on in the 2017 election, is a lot.

There are about 50,000 teachers in New Zealand on a full-time-equivalent basis. If you divide $1 million by 50,000, the answer is $20. The author might have thought, “I know David Seymour’s an idiot, but he’s also a former under-secretary to the minister of education. Surely his big idea can’t be to reform education on $20 per teacher?”

You probably think I’m being a bit priggish, but it really is worth showing what we’re dealing with when it comes to the standard of debate on this topic.

A billion dollars divided by 50,000 teachers is actually about $20,000 each. That amount would make a big difference to a teacher’s pay. It would mean that the average teacher salary would go from the low $60,000s to the low $80,000s. This would restore teacher pay to the same level, vis-à-vis the average salary in the rest of the economy, as it was 35 years ago.

Then, a teacher at the top of the scale earned about 180% of the average wage. Now, the same figure is 140%. If people had known this would happen, I suspect many would never have entered the profession. There are certainly enough leaving now. The extra $20,000 would roughly restore the ratio of teacher pay to the average salary to what it was 35 years ago.

It’s worth asking how we got here. Over the period in question, unionisation has plummeted across the economy. Teachers remain one of the most, if not the most, unionised profession. Could it be that their insistence on paying every teacher the same, and making it almost impossible to remove bad teachers, has been part of the problem?

Unless you’re unbelievably noble or don’t really like money, you’re not going to stick around being massively underpaid while time-servers breeze in and out around you. Kudos to all the noble teachers, but, house prices being what they are, it’s getting harder for the current generation of young teachers to ignore the money. As my own favourite teacher said to me years after I left his class and entered politics: “I don’t know why some of them show up except to get their pay cheque.” This system damages the profession and depresses its pay.

The author goes on to argue that introducing performance pay would add another layer of bureaucracy. Clearly the author does not know what the union collective agreements are like. Many of the frustrations I hear from teachers in the staffroom arise from the inflexible nature of contracts negotiated one-size-fits-all between the Crown and the unions in Wellington. I know of one small school with a single unionised teacher. They are not allowed to talk to the teacher about contractual terms, having to do so through the union representative who is outside the school.

We have a system that logically cannot satisfy all because of the terms and conditions set down in union contracts. Some want more money, some want planning days, some want smaller class sizes. These variations are only natural because teachers are (a) human and (b) at different stages of their lives and careers. The author of the piece somehow managed to argue that individual employment agreements for teachers would actually lead to more “one-size-fits-all”.

That seems to come from the idea the principals will abuse individual employment agreements, using their power to bully teachers into a monoculture. This is very worrying. If principals really are tyrants who can’t be given any more power lest they abuse it to stifle their staff’s creativity, then we have even bigger problems than I realised.

That leads on to the old chestnut: If teachers are paid differently, they won’t collaborate. Clearly the author is not aware of the rest of the economy. Accountants and architects, for instance, have individual employment agreements. They still manage to collaborate and produce results.

Another way to put it is in reverse. Imagine going down to law or engineering school and telling the students: “Righto – 96% of you are going to work for the Crown on one-size-fits-all contracts where you can’t get paid more for how well you perform, only for serving time. This will make you more collaborative.” Would that increase or decrease the calibre of school leavers who want to be lawyers and engineers?

Then another chestnut. Well, you can’t measure teacher performance! The assumption is that, for some reason, teachers will just be paid based on test scores. Why would any business do that? The suggestion is that a principal would know all about a teacher’s collegiality, difficult or easy to teach kids in their class, commitment to extra-curricular activities, potential other job offers… but of course they’d just ignore all that and pay them based on test scores.

On what planet would that be the case? In what other profession is pay done that way? There is simply none. Of course, individual employment agreements would take into account the many factors that make up an individual’s value to an organisation, that’s how it works in the rest of the economy.

Here’s the kicker. Whatever the state sector thinks of individual employment agreements, the independent schools are doing it. They use algorithms to analyse whether a kid’s test scores are better in a particular teacher’s class compared with the same kid’s performance in all their other classes. Then they use that as a guide when taking into account a whole lot of other factors and, bugger me, they employ teachers just like real professionals.

Amazingly, the author quotes teacher union boss Lynda Stuart as saying there is no research that supports the idea performance related pay improves outcomes for students. Of course she’d say that. But she’s wrong. In 2007 the Journal of Public Economics published a study which found “test scores are higher in schools that offer individual financial incentives for good performance”. Similarly, 2011 research in the Economics of Education Review looked at cross-country evidence on performance-related pay and found it was “significantly associated with math, science, and reading achievement across countries”.

The question is whether or not we want to continue with low-morale, underpaid teachers on one-size-fits-all union contracts that the rest of the economy dumped in the 80s and 90s. ACT’s policy at the last election was, and still is, that the government should set aside a billion dollars and give principals an extra $20,000 for each teacher they employ. If teachers want to leave the union collective, they can access this top up to their base salary.

We would see teachers who are leaders of the profession, who inspire their kids and upskill their colleagues on $100,000 or more. We’d see others sent a pretty clear message about their future in the profession. We’d see more top students wanting to enter the profession and more top teachers wanting to stay. We’d achieve what everyone says they want: teaching respected as a profession like accountants, architects, engineers and lawyers.

Crucially, we’d see a lot more political support for paying teachers more because people would know their taxes were going to the best. It is significant that even ACT supports this. It is one of the very few times we’ve supported increasing government expenditure in our 25-year history.

Unsurprisingly, union organisers want to keep negotiating collective agreements, a bit like how butchers want to keep selling meat. For the rest of us, and especially the current generation of students who might like the idea of becoming teachers, turning teaching into a profession with individual employment agreements like every other profession can’t come soon enough.