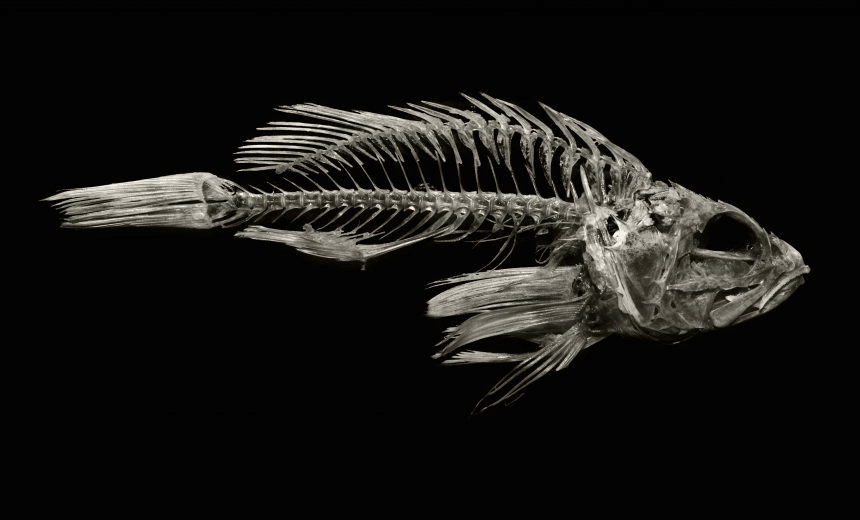 By Katie Parker and River Lin
Guest writer
Made possible by

The Spinoff’s magical interns Katie Parker and River Lin spent an evening gobbling fish and listening to people talk about death. Here they converse via email about what they learned about David Seymour, assisted suicide and their own mortality.

So last night you and I were fortunate enough to attend a pretty exciting event, that being TABLE TALK WITH THE SPINOFF.CO.NZ & HOST JEREMY ELWOOD – ASSISTED SUICIDE at Laila Harre’s Eden Terrace fish restaurant Ika.

First of all I did not know Laila Harre had started a fish restaurant. Very interesting. Second of all, call it “current affairs cabaret” or whatever you want but watching a room full of elderly white people discussing assisted suicide over plates of whole fish is certainly not how I usually spend my Tuesday nights. Also interesting.

It was all a bit surreal but interesting nevertheless. ACT leader David Seymour was significantly more charismatic that I would ever have dreamed, Dr Stephen Child was interesting and pretty brave to be there and Associate Professor Jan Crosthwaite seemed cool even if a lot of the time she had trouble getting a word in edgeways. I don’t know what you make of assisted dying – or even exactly what I make of it – but it was more interesting to think about than I expected, even if it wasn’t super fun. I thought they all made some good points and some pretty flimsy points.

How was your fish death dinner experience?

River: I definitely didn’t expect a career trajectory from politician to restaurateur, but hey, there’s a first for everything. The fish was almost gone by the time the talk started, so it feels like it was a little less weird than it could’ve been. Who tucks into plates of fish over a merry conversation on assisted suicide on a Tuesday night? I feel like there’s a metaphor in there somewhere.

Very surreal. I always thought, judging by David’s name and profession alone, that he would be a lot older and more serious than he was. That was jarring. I thought Stephen was great and had an interesting perspective. His experience in the medical profession really helped to humanise the statistics and the assumption that the practitioners involved are detached from what it is that people are asking for when they consider assisted suicide. Jan seemed okay, though again, didn’t really have the chance to voice her opinion. Jeremy Elwood as host was great, though! Love him on 7 Days.

They did make some good points, didn’t they? There was a lot of deferring from the audience members’ questions, though. It would’ve made for a polarising, more interesting debate rather than the echo chamber that it was.

Katie: It definitely was a bit of an echo chamber, I didn’t get the impression anyone in the audience was anti-assisted dying. But it also seems like the kind of issue where most people aren’t exactly adamantly anti it per se, so much as there doesn’t really seem like there’s any super easy overall answer. But these people were super pro-assisted dying.

Which is why I thought Stephen Child was pretty brave to be there all things considered. He wasn’t really even taking an anti-assisted dying stance either, so much as a wait-just-a-darn-minute stance. It was definitely the most pragmatic take. His main position seemed to be that rather than a moral issue, this is a legal issue. If you want to legislate assisted dying and not fuck it up, you’ve got to write a perfect law and how exactly can we write a perfect law?

River: Yeah, it’s definitely a complex issue that can’t be resolved in an hour and a half-long panel discussion after dinner. I also feel like the older demographic of the audience had an impact on the overall mood.

Stephen really laid out the different options, but he also brought up an interesting point about informed consent, freedom of choice, and where those legal limitations lie. There’s definitely a lot of room for error in calling for a reform, and one that can’t be answered easily.

Do we adopt frameworks similar to that of the Netherlands or Belgium, where people congregate towards particular medical practitioners willing to engage in assisted suicide or do we, as you said, return to a state of nature?

Katie: It’s so niggly. To be totally honest, and though I totally respect him for doing it, I don’t really get why David Seymour is doing this? Obviously he’s said why in this very web publication, and he kind of outlined those reasons last night (to quote him, “because no other bastard will do it”) but it’s a pretty bold political move.

On another note, one thing I thought was very odd and also very interesting was that there was almost no mention of assisted dying in the context of disability, which I would imagine might be one of the most contentious and important angles of the debate (and which has also been discussed on site, so to speak). Obviously none of them have seen You Before Me. Did you find that weird?

River: I commend him for really campaigning on the issue, but it is a bit of a weird reason to do anything. Is it an issue of other politicians’ complicity because “no other bastard will do it” that motivates him? Maybe that’s just how politics works. I don’t know nearly enough about politics, either, so it’s hard to say either way if there’s an ulterior motive involved, if any.

Yes, very weird. It was generally in the context of degeneration or the final stages of cancer, but disability is also an issue which is, like you said, contentious and potentially full of disagreement. Has anyone seen Me Before You?

Katie: Definitely not and nor should they. I guess I went into this feeling like it’s more or less impossible to make a call on this outside of a case-by-case basis and this pretty much just affirmed that for me. I can’t really imagine how anyone could be averse to doing something to stop real, true, horrific suffering but also I also don’t know how you make that decision. But I can barely decide what to have for dinner. Just another reason I thank God every day I am neither a doctor nor a lawyer.

River: Agreed. It’s hard to apply a broad brush to an issue like assisted suicide and not “get it wrong” sometimes, so to speak. I’d also like to add that I’m glad I’m not a politician.