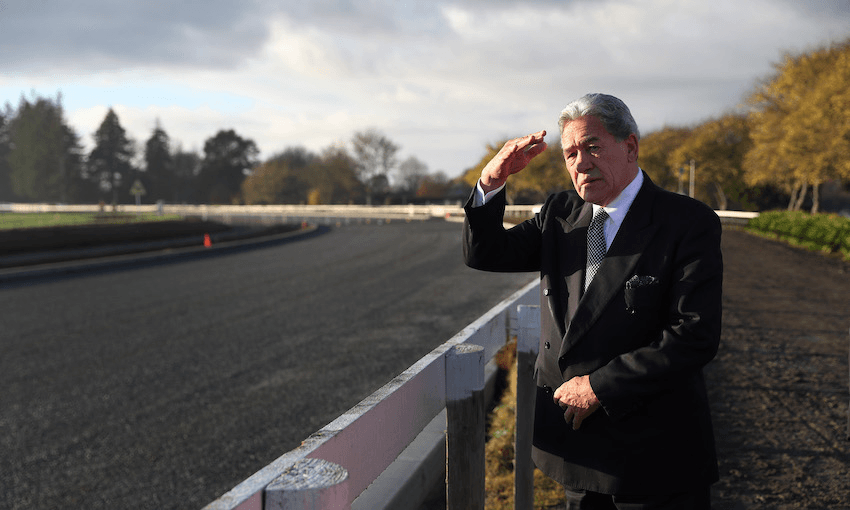 The conspicuous scuppering of government plans is designed to win support for social conservative voters. Unfortunately for NZ First, the evidence suggests it isn’t working: they’re undermining their own government for no gain, argues Danyl Mclauchlan.

And now Newshub has released a secret recording of the fisheries minister, Stuart Nash, saying that New Zealand First MPs Winston Peters and Shane Jones were lobbying ferociously behind closed doors on behalf of the fishing industry, after Jones and the foundation both accepted donations from the largest corporations in the sector.

That’s not what this column is about. I’m writing about the long list of this government’s initiatives which New Zealand First has vetoed or stymied over the past three years, many of which were campaign promises made by Labour or the Greens, some of which were in the coalition agreement signed by New Zealand First.

But here’s the thing. I think Winston Peters wants people like me to write that piece. Not only that: I suspect the only reason Peters keeps scuttling policies of a government that he is Deputy! Prime! Minister! of! is to generate media about it. And this is because Peters knows the voters most available to him are the most socially conservative people in the country. He knows his competitor for those votes is the National Party. So he’s attempting to demonstrate his value to those voters by showing them that he can, if he wishes, prevent Labour and the Greens from doing anything meaningful in government. Which, full credit to him, he can. He’s the most powerful deputy prime minister we’ve ever seen.

But while I’m writing about exactly what Peters wants, I think it’s only fair to write about two things he really, really doesn’t want: 1. that his party is under investigation by the Serious Fraud Office, and 2. Hardly any of the things New Zealand First has forced the government to do, or blocked it from doing, relate to the election promises Winston Peters made during the 2017 campaign.

Here’s a partial list of New Zealand First promises and policies from 2017:

You might notice that the most powerful deputy prime minister in our history has not visibly achieved any of those things. I mean, yes: immigration is down because of the pandemic, but prior to that it was at record highs (56,000 per year). As far as I can tell, Peters’ priorities in government have been: a free trade deal with Russia, more funding for the racing industry, preventing cameras on fishing boats, preventing the introduction of a capital gains tax. All of which happen to coincide with the financial interests of donors to the New Zealand First Foundation.

With all that out of the way, let’s have a look at what NZ First MPs, by my reckoning, have prevented their coalition partners from doing, in part or full:

If you’re a socially conservative voter I think you’ll look at some of those decisions and feel pretty good about them. Others not so much. But what frustrates Peters’ coalition partners is the way he tends to go about blocking their policies. From the outside it appears that Peters’ standard tactic is to say nothing throughout the policy development process, or even indicate he’ll vote for something, right up until the last minute, just before the public announcement, and then gleefully announce that he’s withdrawn his support. It is a chaotic, anarchic way to conduct coalition politics and it wastes a huge amount of money and time that could be spent governing the country. But it wins him the most media attention.

I have asked people associated with New Zealand First why this happens, and the answer is “because when we do we soar in the polls”. But New Zealand First averaged 4% over most of 2018 and 2019, with very little movement, dropping to about 3% in the wake of the donations scandal and Simon Bridges’ decision to rule Peters out of a future National government. They’re on 2% in the latest Colmar Brunton poll. There is no soaring. This strategy just doesn’t seem to work. They’re undermining their own government for no gain.

And whenever this happens, Jacinda Ardern insists that “this is just how MMP works”. It’s not, though. We’ve had MMP for 24 years. Coalition governments under Helen Clark and John Key absolutely did not work like this. Although each coalition with Peters in it has ended up burning down around him.

In a way you never know what you’re getting when you give Peters your vote. Will what he does in government have anything much to do with what he says during the campaign? Who knows? But in another sense you do know exactly what you’re getting: an agent of chaos. After the election Peters will use any leverage he has to place himself in a position of maximal power and then systematically create havoc in whatever government he leads. Whether it is “socially conservative” to vote for him and enable this behaviour in the midst of a pandemic and global economic collapse is a decision social conservatives can make for themselves. The latest poll results suggest that they’ve made it.