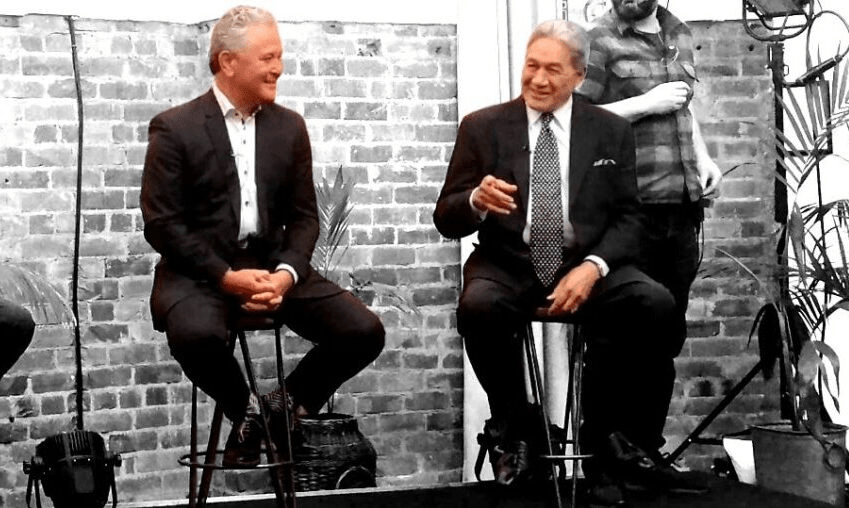 John Tamihere and Winston Peters at the Newshub powerbrokers debate.

Winston Peters looked like a man transformed at the Newshub debate

John Tamihere and Winston Peters at the Newshub powerbrokers debate.

Leaders of the Greens, Act, Māori Party and NZ First joined in a rambunctious exchange in Auckland last night. Toby Manhire was there.

Had I disappeared off-grid to live in a cave 10 weeks ago – and don’t think I wasn’t tempted – then returned last night to the Newshub “powerbrokers” debate, I’d have confidently told you this: Winston Peters, perched on the far-left stool, beaming above his immaculate white-spotted tie, is heading back to parliament. While I was hibernating, New Zealand First must have climbed to 5% or more, or taken the lead in Northland. That man is a picture of contentment.

This was not a man beleaguered by Serious Fraud Office inquiries and court battles, vexed by a campaign that began with 2% support and went south from there. Neither the irascible, pugilistic Winston Peters was there, nor the flat-battery Winston Peters that has at times been witnessed in this strange campaign. Here he was relaxed, quick, funny, grinning – he appeared not to have a worry in the world as his chief aide Jon Johansson delivered him at each commercial break what looked like a sip of wine but I’m assured was apple juice.

It was apple juice only across the long tables in the old bank in Grey Lynn: while filmed at night, it airs at the sober hour of 9.30am tomorrow. Not for the first time, the Newshub minor party debate – or “powerbrokers debate”, as it’s now branded – made headlines even before it began. In contrast to the Colin Craig gatecrash of 2014, the court injunction from Jami-Lee Ross and Billy TK Jr of the Advance Party failed; no platform for them. That was at the 11th hour – at the 10th, producers at last succeeded in securing Peters’ participation, following the latest installation of Winston playing hard to get.

With the two main parties oscillating towards the centre, there’s plenty of territory for the minor (sorry, powerbroker) parties to traverse. Ably chaired by Simon Shepherd, the four participants – Peters, the Greens’ Marama Davidson, Act’s David Seymour and the Māori Party’s John Tamihere – all made a good fist of it.

Davidson and Seymour got their messages across effectively, though neither seemed risk-inclined, which is no surprise given their status hovering a breath or two above the threshold. The only non-sitting MP on the stage, Tamihere was the most electric. Seventh on the list and a very long shot in Tāmaki Makaurau, he’s at no serious risk of winning – as he said after the debate, he couldn’t even get two ticks out of his daughter, who was voting Jacinda in this “war-time election”. The lack of any chance of a real shot at returning to parliament in 2020 seemed to liberate him. Perhaps the same might be said of Peters.

Among Tamihere’s very good lines, he said of the ascendant David Seymour: “It’s Judith Collins’ job to save the furniture, but what she doesn’t realise is he’s out the back taking a lot of it.”

Between them, the warhorse pair of Peters and JT were great entertainment. It was as if they had been sitting beside each other on those stools forever. A mix of banter, back slapping (literally) and occasional venom (not literally). After showering Peters in praise, Tamihere caught himself: “I think he’s been terrible,” he said. Later Tamihere told Peters to his face that he was “the biggest handbrake on the Māori renaissance … of all politicians”. Peters retorted that the people who sailed the Pacific to populate Aotearoa had the wherewithal to lift themselves up without the nannying state.

Te ao Māori was present throughout – not just because of the questions, and not just because Tamihere and Davidson worked hard to raise kaupapa at every turn, but also because every candidate on the stage was Māori. Tamihere afterwards scoffed at that characterisation, though, saying that not everyone could, like him, be called a “practising Māori”.

Shepherd shepherded the quartet through a range of policy areas – the Covid response, housing, climate change, children, Ihumātao. And it was punctuated with a good number of lols.

These, for example, were the answers to the question “Name your worst mistake over the last term”:

Winston Peters: “According to the cabinet rules I can’t tell you.”

David Dancing with the Stars Seymour: “The paso doble.”

But back to Winston Peters. He seemed at peace last night. Unburdened. And still, under the spell of his singular grin, I wondered. What if this Winston had showed up all campaign? What if he’d tried something other than the paradoxical and oppositional “handbrake” slogan? After all, it’s pretty hard to sell a motor vehicle on the basis of the handbrake. What about, instead, I don’t know, the cruise control or power steering?