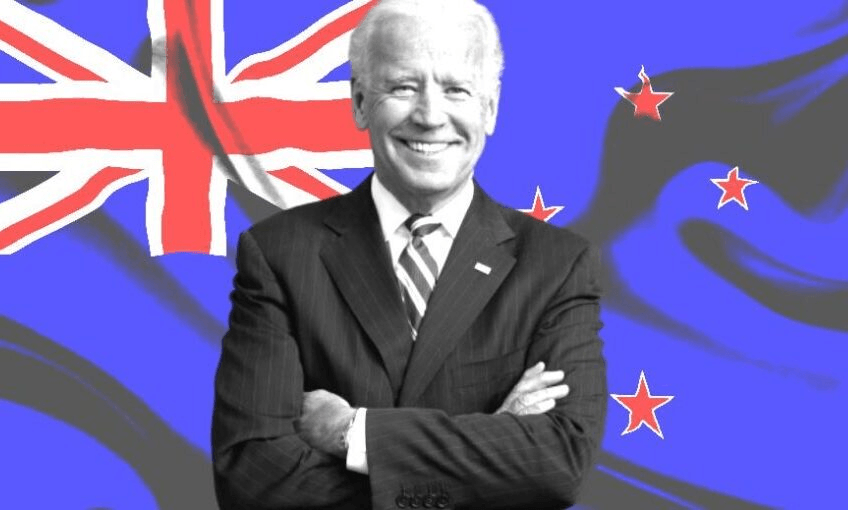 If the polls are to be believed, Joe Biden will defeat Donald Trump this week. NB if.

What would a President Joe Biden mean for New Zealand?

By Nina Hall
Guest writer
Made possible by

If the polls are to be believed, Joe Biden will defeat Donald Trump this week. NB if.
Opinion

If the Democrat challenger were to overcome Donald Trump this week, it would have important implications for the world and Aotearoa, writes Nina Hall.

Positive international views of the United States have declined dramatically under President Trump. In a recently released Pew survey, Trump was found to be the least trusted leader to “do the right thing in world affairs”. He was behind Vladimir Putin, Xi Jinping and Boris Johnson, while Angela Merkel proved the most popular leader of the lot. This is perhaps not surprising, given the Trump administration has undermined many of its natural allies and curried favour with its natural enemies. Scott Morrison, Boris Johnson and Narendra Modi are among the few democratic leaders who will be sad to see him go. President Trump has been incapable of recognising, let alone adequately dealing with, the severity of the Covid pandemic or institutionalised racism in the United States.

Biden is doing well in current polls but few know whether there’ll be a clear winner on election night, and, even if there is, whether a change in government would be smooth. If Biden were to be elected president, what are the implications for New Zealand? Here are six key issues to consider.

Biden will be a natural ally to Ardern, given their shared centre-left perspective. Biden has already expressed his desire to “fortify” US alliances with “democratic friends” in Europe, Australia, Japan and South Korea. In his first year in office he has also promised to hold a summit of democracies, to address the rise of anti-democratic, nationalist tendencies worldwide (and not just in his own country). New Zealand would be likely be a close ally in these discussions, given the countries’ shared democratic values, membership of the five eyes alliance, and common Anglo heritage.

Trump’s foreign policy operates through Tweet-diktat. He has undermined his own diplomats, and left important positions in the State Department unstaffed. Trump’s foreign policy slogan may be “Make America great again” but the practice is more akin to “Make the Trump family rich again” (and avoid paying tax on it). Biden would enable the US diplomatic service to do its job properly and not make unilateral foreign policy decisions on social media. He would be much easier to work with, even when New Zealand and the United States disagree.

Trump has purposefully escalated tensions with China – from the trade war to the Covid pandemic. Biden shares Trump’s view that the US “needs to get tough with China” otherwise it will “keep robbing” American businesses of their technology and intellectual property. He wants “to win the competition for the future against China…” and unfortunately prescribes to a common, bipartisan view that China’s rise equals US demise. International politics and the global economy is more complex and interconnected than one winner takes all. Biden will want New Zealand to help confront China, although he has pledged to work with China on areas of common interest such as climate change and global health security, areas that are not a zero-sum game.

Trump has consistently undermined global climate action. He pulled the US out of the Paris Climate Agreement. He has supported the fossil fuel industry, and undermined and defunded science on climate change. In contrast, Biden has committed to rejoin the Paris agreement immediately upon taking office. He would make the entire US economy carbon neutral by 2050, and has a US$2 trillion plan to increase renewable energy. In addition, he would establish an office of environmental and climate justice to ensure that disadvantaged communities receive 40% of clean energy, and that future climate policies don’t fail communities of colour. Importantly, he wants to integrate climate policy across US trade, foreign and national security policies. This means his administration would also put pressure on other countries to ramp up their climate actions. The Ardern government will be eager to work with the US on this agenda.

New Zealand is a strong defender of the United Nations and the “rules-based order”. Trump has actively undermined multilateralism and pulled the US out of Unesco, the UN Human Rights Council and the Global Compact on Migration. He has cut funding for various UN entities including UNFPA (which advances family planning worldwide) and UNRWA (which supports Palestinian refugees), and now the WHO – at the height of a global pandemic.

Biden wants to reengage, but with the US “back at the head of the table”. His views are old-fashioned and US-centric. He harks back to an era when the US played the leading role in writing the world’s rules. World politics has changed dramatically, and many will not want the US at the head of the table. Moreover, the US has hardly been a strong advocate of global rules even under Democratic presidents. Neither the Clinton nor Obama administrations ratified the Convention on the Rights of the Child but over 190 other states have, and it is the most rapidly ratified human rights treaty in history. In fact, American foreign policy critic Emma Ashford has pointed out the “narrow Washington consensus has failed our country and the world”.

The problem of American exceptionalism

Biden, unfortunately, still clings to ideas of American exceptionalism. He has stated that “no other nation” can “rally the free world” to meet the challenges facing the world today. Some of his foreign policy advisers are advocates of liberal-interventionism. Yet the idea that US can solve every country’s problem, and instil democracy worldwide, led to the war on terror, and many other disastrous interventions. Biden is also comfortable appealing to American nationalism in his foreign policy and can sound even a little Trump-like. He will make sure “the rules of the international economy are not rigged against the United States –because when American businesses compete on a fair playing field, they win”. The New Zealand government will need to tread carefully and clearly with the US on this. We do not want a return to a world of US interventionism, even if led by a Democrat.

Nina Hall is an assistant professor of international relations at Johns Hopkins SAIS, based in Bologna. She is editor of a recently released BWB book on New Zealand’s foreign policy, Beyond These Shores, Aotearoa and the World. She is also a co-founding member of the New Zealand Alternative.