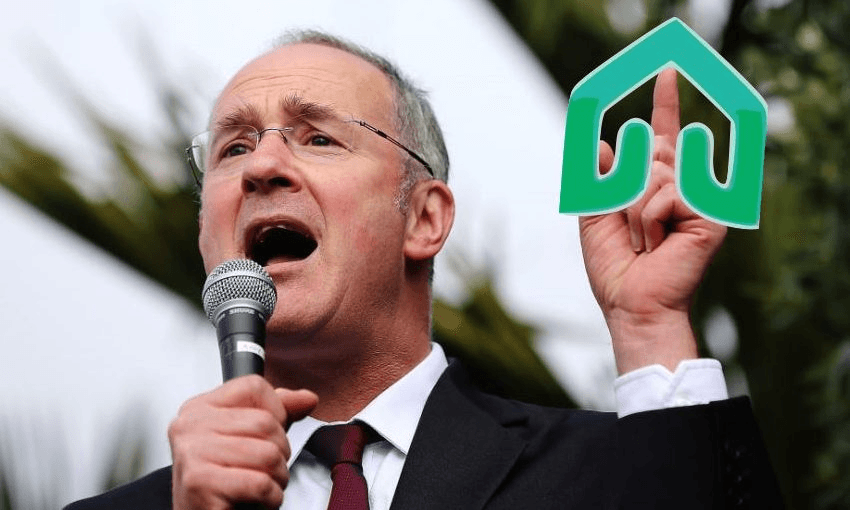 Can you buy a Kiwibuild house?

The buyer eligibility rules for the government’s marquee house building programme have just been released. Do you qualify? Alex Braae has the skinny

Remember when the housing crisis became a real thing for the commentariat of New Zealand, because their sons and daughters were being priced out of the market? Well don’t worry, because it’s all fixed now – almost everyone will be able to buy one of the government’s brand new Kiwibuild houses. Hooray!

Aren’t the Kiwibuild houses just for people on low incomes?

Absolutely not, where would you get that idea? The eligibility criteria have just been released, and there are income thresholds. If you’re partnered up and the two of you together scrape by on anything less that $180,000 a year, then yes, you are eligible. And if it’s just you, surviving all on your own on the pittance of up to $120,000 a year, then you too can have a house. An affordable house at that, which in Auckland means the low low price of $650,000.

They are. Part of the information provided by minister Phil Twyford’s office included this line about the income thresholds: “KiwiBuild is about restoring the Kiwi dream of home ownership to those families who traditionally would have expected to own their own home but who are struggling because of the lack of lower-priced, starter homes available.”

In other words, the dream of home ownership is a goddamn birthright for New Zealanders, and it’s politically much more beneficial to dangle that carrot in front of as many people as possible. What did you think this was, social housing? For those on lower incomes who thought this might have been a way to own their own home, they’ll just have to go into the ballot with everyone else.

But just before you said I “can have a house”?

Ah, yes. That’s the other sticking point. There won’t actually be anywhere near enough homes for everyone in the first instance. Stuff has built a tracker by which Kiwibuild progress can be measured against what the actual targets are. The big, top line number is 100,000 houses in ten years, but it isn’t remotely realistic to think that it’s possible to build 10,000 houses a year straight away. So instead, the target for the first year is 1,000 houses – as per the tracker, 430 are under construction right now.

How does the ballot work?

Everyone who wants one will have to put their name in a ballot. If there name gets drawn for a property they have expressed interest in, they will have the first opportunity to buy it. It’s a classic case of equality triumphing over equity – the IT professional flatting in Grey Lynn and earning $100,000 a year has the same chance of getting a house as the solo mum working two jobs to keep the rent payments coming through.

I am an IT professional currently flatting in Grey Lynn and earning $100,000 a year, so this sounds extremely good.

Well, there are a few other bits of criteria. You’ve got to be a citizen, permanent resident, or someone who ordinarily lives in NZ. You’ve got to be a first home buyer, or a “second chancer” – someone who once owned a home, but now doesn’t. And you’ve also got to make the sacrifice, the noble commitment, of living in the house and not flipping it on for at least three whole years. That might not sound like very long at all, but think about it this way – it’s more than 1,000 whole days. After that, sweet as, flip away.

What if I enter the ballot and don’t get picked. Am I screwed?

Not necessarily. As the housing supply increases (which may or may not happen, more on that below) it is the minister’s expectation that overall, house prices will come down. There are other mechanisms being used by the government to gradually cool the housing market, such as the foreign buyers ban – currently around 3% of house sales are to foreign buyers, though that data is contested and it could be a little bit higher. But even at that relatively low percentage, that does have an impact on wider price trends, particularly as activity is concentrated in high pressure areas, like Auckland. That then in turn means that higher prices start to ripple outwards, through to smaller cities and even small towns. It’s just not quite clear how much the impact from that factor is.

Yes. That is a worry. There’s a severe labour shortage to actually build the things, to the point where the government last week proposed the creation of a Kiwibuild skills shortage list, so that workers from overseas could help out with the building. New Zealand is currently estimated to be short of about 30,000 construction workers, so if you’re young, fit and unemployed, now would be a great time to start a trades apprenticeship – you won’t lack for work.

And then there’s the building materials. In New Zealand, the wood and wiring that holds a house together is relatively expensive to come by, which means that it’s more difficult to build affordable housing. You could pay more and more and more for it, but that could in turn have a distorting effect on private sector building. And if all of this resulted in no real increase in the number of homes actually being built, then it would be a rather pointless exercise, wouldn’t it?